EU member states have rejected proposals from the European Commission that would have extended the European pension regulator’s powers and introduced an industry levy to fund the bloc’s financial regulators.

The EU Council today published its compromise agreement on proposals to reform the bloc’s financial supervision system, which crucially did not include Commission suggestions that had worried European occupational pension funds.

The Council’s position would limit the extension of powers put forward by the Commission proposal, which was presented in September 2017. For example, the Commission had proposed the introduction of industry contributions to fund the EU’s finance watchdogs, but this did not feature in the Council’s proposal.

A final version of the supervision reforms must be agreed between the Council, the Commission and the European Parliament, all of which have put forward their own version of the initial text.

The Commission had also called for the establishment of an executive board with permanent members, but this also failed to make it into the Council’s proposal.

In addition, the Council scrapped from its position a provision for the European Insurance and Occupational Pensions Authority (EIOPA) – one of the three European financial supervisory agencies (ESAs) – to be allowed to disclose how individual occupational pension funds or insurers fare under sector stress tests.

In a statement, the Council said its general approach ensured a “key role” for national regulators within the ESAs’ governance structure, adding that “no decision should be taken against the will of a majority of national supervisors”. 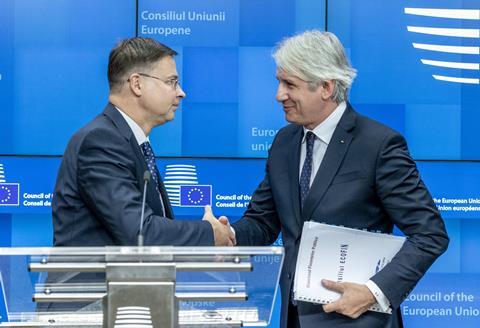 “Europe’s pensions landscape is very diverse, so we welcome the position that national supervisors should retain a strong role in EIOPA’s management structure,” he said.

“We also think it’s better that the ESAs are funded through the EU budget and member states contributions than through fees from financial institutions. Pension funds are not directly supervised by the ESAs and therefore shouldn’t pay into their budgets.”

At a press conference after a meeting of EU finance ministers today, Valdis Dombrovskis, Commission vice-president, said the compromise reached did not have “the same high level of ambition” as the Commission’s initial proposal, but it was “as good as it can get when we needed to compose with a number of diverging views”.

Negotiations between the European Parliament and the Council are set to begin this Thursday with the first trilogue.

The Parliament’s economic and monetary affairs committee adopted its position, which is more aligned with the Commission’s proposal than the Council’s, last month.

The Commission is keen for a political agreement to be reached before the European Parliament elections in May.