• A Minsky cycle is the gradual accumulation of excessive debt, which inflates asset prices.
• This is followed by a market crash, which deflates them as debt is reduced
• A Minsky moment is the point when the crash happens
• Most analysts do not see a Minsky moment in a large developed economy as imminent
• However, the US could see a Minsky moment before other economies, because of expected rate rises

The bout of marked market volatility in February prompted heated debate about one of those pieces of economic jargon that occasionally gains wider currency: were financial markets close to a Minsky moment? This term, devised by Paul McCulley of Pimco in 1998 in honour of the late US economist and chronicler of financial crises Hyman Minsky, is the counterintuitive observation that stability breeds instability.

In its purest definition, the lead-up to a Minsky moment occurs when investors are encouraged by low interest rates to take on excessive leverage, which leads to speculative froth. This is the later stage of a Minsky cycle. An event triggers a reappraisal in the worth of assets bid up far beyond fair value, which causes losses that make investors’ creditors call in loans. This prompts a further fall in asset values, because of forced selling, which leads to a vicious spiral and eventual market collapse.

Or, as Arnab Das, head of EMEA and EM macro research at Invesco Fixed Income in London puts it, once the “necessary conditions” are in place, “you usually need some kind of shock to make the whole thing collapse like a house of cards”. The Minsky moment is the shock that causes this collapse.

Most analysts are sceptical that the world is near such a moment. When it comes to investors, “where is the evidence of leverage?” asks Andrew Milligan, head of global strategy at Aberdeen Standard Investments in Edinburgh. He sees plenty of cases of asset values pushed up to elevated levels, such as “extremely high” apartment prices in London. However, “it’s not leverage that’s driving them up”. Take his example of upscale London flats: “It’s a stream of overseas cash investors desperate to buy a safe haven.”

However, many observers prefer a broader definition of the Minsky cycle, which encompasses any buildup in debt, or any inflation in asset prices beyond a sustainable level, as long as it has an origin in low interest rates. The shock that brings the house of cards down is usually a rise in these rates. This is the preferred definition of Alessio de Longis, head of the global multi-asset group at OppenheimerFunds in New York, who describes a Minsky moment as “a fancy way to describe the typical behaviour of the end of the credit cycle”. 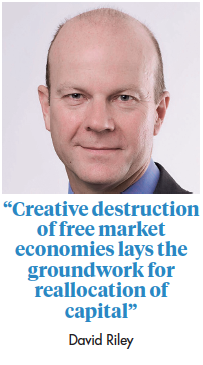 Even when seen through this wider lens, the February slump in the price of a range of assets, including equities, credit and commodities, still did not prove a Minsky moment, since the market stabilised. It could, at least, be seen as a sinister omen that a Minsky cycle may be gradually approaching its end, because it was triggered by better-than-expected US wage numbers, which caused a market reappraisal of future US interest rates. However, many analysts do not even regard it as that. “I don’t think the recent period of volatility is indicative of anything except the fact that there are periods of market volatility,” says Mike Coop, head of multi-asset portfolio management, EMEA, at Morningstar Investment Management in London.

Nonetheless, the US is still seen as a strong candidate for the next Minsky moment in financial history. This is partly because the Federal Reserve is leading the developed world in raising interest rates, and partly because the US’ credit cycle has been so long – allowing the gradual accumulation of credit over a long period of time necessary for a Minsky moment. US corporate debt is, at 72% of GDP, close to the record high of 2009. The key question is how severe this Minsky moment will be. To many analysts, the slow and well-telegraphed pace of expected future Fed rate rises, at only about 1% a year even after the strong US wage figures, suggests a relatively orderly downturn rather than a rapid fall – in other words, a mild Minsky moment at worst, and possibly no such moment at all.

Cutler Cook, associate director at Paamco, the fund of hedge funds company, is a Minsky optimist. He points to the famous quote by onetime Fed chairman William McChesney Martin, who said his job was to take away the punch bowl just as the party got going. According to Cook, “the punch bowl is being removed, and certainly the hosts are aware of the need to take the punch bowl away slowly”.

Olivier Marciot, investment manager for Unigestion’s multi-asset Navigator fund in Geneva, expresses a similar view, saying: “Even though the direction of central banks is towards normalisation, they are doing it the right way; they prepare markets correctly in between meetings about what they are going to do next, and they are not doing it too fast. They are not ahead of the curve.” 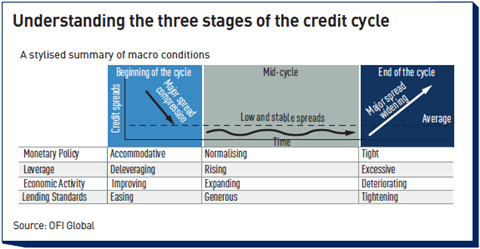 When asked whether he believes the world is set for a mild or severe Minsky moment, de Longis also plumps for the mild option, although more cautiously. Moreover, he counsels, “the answer really depends partly on the picture in other regions of the world. If they’re not experiencing a similar downturn, they will provide an offset to the credit unwind in the US.” De Longis argues that Europe, importantly, is unlikely to experience a Minsky moment at the same time, amplifying the effect of the US Minsky moment, because interest rates remain low and the credit cycle is only a few years old. The younger the credit cycle, the smaller the debt built up in the system.

Pessimists can make the case that various emerging markets could experience their own Minsky moment at the same time as the US, because many of them fund much of their debt in dollars. The 2013 spike in Treasury yields, on news that the Fed would reduce quantitative easing, could be seen as a rehearsal for this, since it prompted crises in emerging markets including Turkey and South Africa. However, David Riley, chief investment strategist at BlueBay Asset Management in London, argues that this so-called taper tantrum has made emerging economies with dollar exposure less likely to experience key moments, by forcing a partial unwinding of the credit build-up; these economies  have had their Minsky moments already.

But China, the biggest emerging economy of all, is arguably developing its own home-grown Minsky cycle, since non-financial sector debt has climbed to two-and-a-half times GDP. In October 2017, Zhou Xiaochuan, governor of China’s central bank, warned of a potential Minsky moment. However, Riley of BlueBay is sceptical that an economy still largely directed by the state can experience such a phenomenon, because of its proclivity to use the much greater number of levers at its disposal to deflate balloons in credit gradually. Statist economies are prone to let “zombie companies” overladen with debt survive, rather than to allow the “creative destruction” of free market economies that “lays the groundwork for reallocation of capital”. Looked at this way, a Minsky moment may be painful for market participants but it is better than a fudge.

But even though most analysts do not regard a Minsky moment affecting a large economy as imminent, pessimists could put the case for anticipating it by reducing exposure to risky assets, which bear the brunt of Minsky cycle unwinding. Optimists might counter, though, with the proverb that markets always climb a wall of worry – there is eternally something to worry about, and if investors let these qualms dominate their thinking they would never exceed the risk-free rate.