Insurer R+V and Union Investment said they will use their Pensionsfonds as a vehicle to offer defined contribution pension (DC) plans under the “Betriebsrentenstärktungsgesetz” (BRSG), the pension reform law that came into effect in January.

Das Rentenwerk, on the other hand, a consortium of five insurers, has opted for a unit-linked insurance vehicle known as Direktversicherung.

The launches come as employer and employee representatives (Tarifparteien) in various German industries are still working out when to start negotiations on the new plans without guarantees.

“We are ready to go with our product, which can be individualised for different industries,” said Rüdiger Bach, board member at R+V, at an event today.

Union and R+V have chosen the Pensionsfonds as the vehicle for their commercial offering. 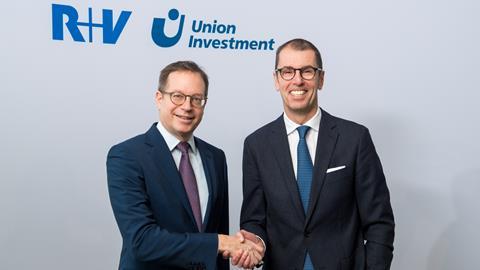 Norbert Rollinger, head of R+V (left) and Hans Joachim Reinke, CEO of Union Investment, at the presentation of their joint offering today

Bach told IPE after the presentation: “We think this is a good regulatory framework to provide the new pension model and we already offer this product.”

In a press release, the Rentenwerk consortium said they chose an insurance-based product as it “offers more transparency” on costs and investments.

However, the insurers added they were “open to other product solutions” should the Tarifparteien demand it.

Both sets of providers mentioned they were already in talks with some industries on how to implement the new plans and vehicles.

“The Tarifparteien need to understand the new pension model, the framework and which adjustment options are available to them,” said Bach.

He said they may eventually decide to tender for any services or platforms relating to the new DC plans – or even be compelled to under EU law.

Bach said some industries had committed to talking about the new pension plans as part of their next round of collective bargaining negotiations.

“But as these new plans cost money it is not sure when an agreement will be reached,” he said.

The metal industry was one of the first to confirm negotiations on the new DC plans under the BRSG.

Any new industry-based pension plan under the BRSG has to be jointly designed by the employer and employee industry representatives, who also have to have a seat on the board of the entity implementing the plan.

Daniel Günnewig, board member on the R+V Pensionsfonds AG, a joint venture between R+V and Union Investment, said: “We will create investment committees in which employer and employee representatives will have a say in the strategic asset allocation, target pension levels and investments in general.”

“The tactical asset allocation and everyday investment decisions will be in the hands of the fund manager,” he added.

German insurers Talanx and Zurich have also said they would offer implementation of the new target pension plans via the Pensionsfonds vehicle. A consortium being formed by the two insurers, Die Betriebsrente, is due to go live by the end of June.