From Our Perspective: Be wary of shredding the regs

The Trump administration maintains that some of the Dodd-Frank legislation brought in following the financial crisis should be repealed or amended. Aside from the Volcker rule on bank proprietary trading, the legislation covers a raft of financial regulation, creating the Financial Stability Oversight Council, regulating derivatives trading and introducing various consumer protections. Any proposed amendment to the rules brought in to make the financial system safer after the financial crisis are, of course, likely to be widely opposed. 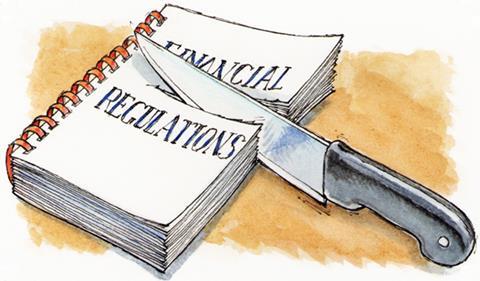 In 2009, following the Pittsburgh G20 summit, there was widespread consensus in favour of a global overhaul of financial regulation. Two jurisdictions took the lead – the US with Dodd-Frank and the EU with a raft of individual measures including the Alternative Investment Managers Directive (AIFMD), the Capital Requirements Directive (CRD IV) and the European Market Infrastructure Regulation (EMIR), which, pertinently to pension funds, covers derivatives.

Americans and Europeans share the desire to boost business lending and stimulate the economy. And most would agree that regulation in response to a crisis is, by its nature, backward looking.

The European Commission under Jean-Claude Juncker has explicitly stated its focus is on stimulating the European economy and moving on from the post-crisis period of repair to the financial system. That gave rise to the Juncker plan, with associated proposals to stimulate and disintermediate lending and the funding of projects that should give rise to future employment and growth.

Part of President Donald Trump’s justification for overhauling Dodd-Frank seems strange, in the light of some statistics. He called the legislation a “disaster”, pointing to friends with good businesses who could not get loans. Yet Federal Reserve chair Janet Yellen testified to Congress recently that commercial and industrial lending was up 75% since 2010. Likewise, the EU said at the end of last year that monthly corporate lending growth was the highest since 2009.

Given the international consensus on financial regulation that was reached in 2009, it would be highly regrettable if the US were to row back on Dodd-Frank, precisely at a time when trust in financial institutions remains low. It would also be ironic, given Trump’s criticism of Hillary Clinton and the Democrats for their close relationship with Wall Street during the election campaign.

No-one wants a competitive global race to the bottom in financial regulation, as the president of the Bundesbank, Jens Weidmann, has pointed out. The EU, and the European Parliament in particular are at least highly unlikely to wind back on regulation, whatever the US does.

Nevertheless, there are legitimate concerns that well intended regulation has overreached in the area of OTC derivatives. Despite the EU’s temporary exemption for pension funds from EMIR, it has been unfortunate that pension funds, which use interest rate and inflation derivatives to hedge risk, may in the future need to lay down cash collateral as variation margin, while at the same time bank capitalisation rules have stymied market making activity for derivatives. The regrettable outcome is that risk-hedging activity becomes more difficult and it is hard to imagine that this makes the financial world a safer place.