German Longevity: Are the tables turning?

“Don’t mention the War.” That is the advice John Cleese’s character gives in the 1970s British comedy series Fawlty Towers when German guests arrive at the hotel he and his wife run. But just as he fails miserably in following his own advice, no article on German demographic developments is complete without mentioning war – both the Second World War as well as the Cold War.

Substantial improvements in longevity were relatively easy to achieve in a country recovering from genocide and compulsory military service which either led to an early death, invalidity or long-term health problems for young males.

Afterwards, Germany was split between East and West and still today longevity assumptions differ for the provinces still known as the Neue Bundesländer in the East. In its latest update to the longevity tables (Richttafeln) German actuarial consultancy Heubeck noted shortly after reunification in 1989 that men born in the former German Democratic Republic still had a life expectancy that was three years below that of their western peers. “Today the difference is only just above seven months,” Heubeck said in a statement. For women it is almost the same now.

In general, the gap in life expectancy between the sexes is also getting smaller: for Germany, Heubeck noted in 1987 that women at the age of 60 lived 4.4 years longer than men, on average. By 2011 that difference had fallen to 3.7 years.

This is only the second update to the longevity assumptions for Germany to be based on so-called generation tables rather than the previously used periodic tables. That means not only age and sex are taken into account for calculating mortality assumptions but also the year of birth.

As the country’s authority on longevity tables since 1947, Heubeck noted that application of this more modern form of looking at age cohorts had not been technically possible before because of lack of data.

In the latest update, for the first time, the analysts included socio-economic factors in their calculations. “Research shows that workers with a higher income in their retirement have a higher life expectancy,” according to Heubeck. As the general level of income throughout Germany is increasing, the tables were adjusted to include lower mortality for the whole population.

Slow-down ‘not yet a trend’

In 2016, the life expectancy for German men was 78.6 years and 83.5 years for women. However, the increase was less pronounced than in previous years.

“While life expectancy for 60-year-olds between censuses in 1987 and 2011 had increased by almost two months for men and about 2.5 months for women each year, the increase has shrunk to one month over the past four years for both sexes,” Heubeck said in a statement.

“But it is yet too early to derive a lasting slow-down in longevity increase from this,” Richard Herrmann, board member at Heubeck added. Therefore, the revised tables included a preliminary slow-down in the longevity trend. 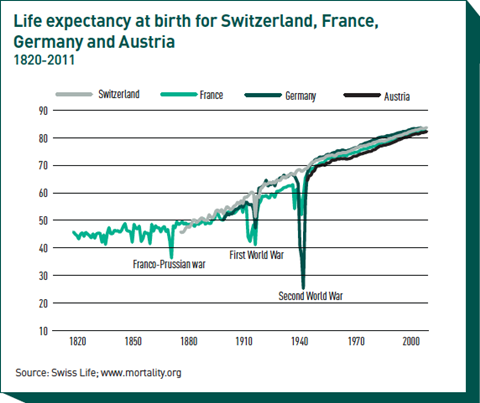 However, a few weeks after publication in summer, Heubeck had to recall the tables, pointing to miscalculations based on the use of “inconsistent data”. Just 10 days later, in early October, the revision of the revised tables was finished.

After the data set had been “adjusted”, according to a press release, the trend in increasing life expectancy was found to be even less pronounced.

For German companies applying the national accounting standard HGB (Handelsgesetzbuch) or international standards this means a reduction in buffer requirements by 50bps compared with the first update. Based on the preliminary calculations, chief actuary and board member at Aon Hewitt Germany, had estimated the increase in liabilities for German companies with Direktzusage arrangements of roughly €10bn in total.

The new longevity tables also affect tax calculations. The one-time effect of the updated mortality assumptions on individual companies’ accounts can be up to 2%, Heubeck noted.

One size does not fit all

Then, of course, there are companies where the assumptions had been adjusted to better match the demographic set-up of the workforce. Some of these companies might not have to make any adjustments at all.

In 2016, the €22bn German public pension fund VBL abandoned the Heubeck tables to apply its own calculations for the voluntary supplementary pension insurance it offers. It noted in its annual statement that a risk assessment by the actuary had shown that the 1998 Heubeck tables applied  hitherto were “no longer sufficiently reliably representing the insured pool in our voluntary offering”.

With regards to the first-time application of a “socio-economic discount” for the revised tables, Thurnes adds a cautionary note: “To apply the reduction to both higher and lower income earners in retirement will only be meaningful when a company’s staff mirrors a representative sample of the population.”

So the longevity development is in flux, especially in Germany. Apart from assessing which tables to apply to best match their own workforce companies also have to take the different accounting and tax standards into consideration to get the best possible estimate for buffers to help them finance pensions should all assumptions have been wrong.