3
Global Debt: Caution in a world awash in debt

Global Debt: Caution in a world awash in debt

John Bilton, Michael Feser and Stephanie Flanders look at the effect that excessive leverage within the global capital markets can have on long-term economic growth

After the financial crisis, policy discussion centred on how to address excess leverage across the financial system. Eight years on, the results are at best mixed.

There is little evidence of actual de-leveraging in developed markets (DM) aggregate debt ratios, yet memories of austerity are still raw. In contrast, leverage in emerging markets (EM) is rising and excess leverage is becoming a concern.

An optimistic reading would be that in DMs a balance sheet transfer has taken place. The reduction in US financial and mortgage market debt – offset by a rise in government debt-to-GDP ratios – has reduced systemic leverage risks, even if it has not alleviated the aggregate debt burden.

A pessimistic view is that attempts to reduce leverage via growth or inflation have failed. Instead, DMs have fallen back on containing the debt overhang through austerity and financial repression – or ignoring it.

Investors fret about high global leverage for two reasons: its long-run effect on growth and the short-run possibility of a credit crisis. In our view, the adverse impact on growth from both the level and expansion of leverage will have a visible effect on asset returns over the next 10 to 15 years. EMs are likely to follow a familiar route of de-leveraging – inflation, currency adjustment, restructuring – while DMs need patience and to explore new tools. 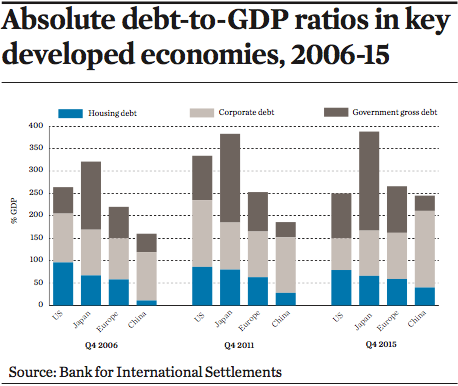 To better frame where leverage creates vulnerabilities, we must focus on three elements of debt: its level, rate of growth and location. Studies have demonstrated that the first two factors – the absolute level of debt and its rate of growth – can affect future economic growth through several mechanisms, including the reallocation of capital, the propensity to increase savings and pay down debt. The final consideration – the location of debt on the national balance sheet – is crucial for understanding the risk of a systemic crisis and determining which policy tools to deploy. Simply put, the further away the debt sits from the financial sector and from household balance sheets, the lower the risk.

In DMs, early and extensive deployment of the sovereign balance sheet facilitated the transfer of private sector debt to the public sector, defusing its power. Private debt service ratios fell sharply as debt levels shrank. Yet even as sovereign debt levels soared, ultra-low interest rates kept DM governments’ debt servicing costs low. Since this transfer has neutralised the systemic risk of large DM countries’ aggregate debts, it is questionable how much incentive they have to address them.

In the emerging markets, patterns of leverage differ by economy, as do paths of de-leveraging. For the most part, the absolute level of EM debt remains subdued by DM standards. Nevertheless, levels of EM private sector debt have risen since the financial crisis, particularly in the corporate sector, and in the absence of an offset through a corresponding fall in interest rates, debt servicing costs for EM companies and households have increased.

In our view, however, EMs have more latitude than their DM counterparts to address excess leverage in the next few years through a combination of balance sheet transfer, inflation and currency adjustment. Meanwhile, DM efforts to inflate away debt appear to have failed, and attempts at currency adjustment in Japan and Europe seem to have backfired, contributing instead to a dollar rally that, in turn, threatens the trajectory of global growth. DM policymakers must choose to be more inventive – or else more willing to overlook the problems of excess leverage and accept it as a quasi-permanent component of their economic framework.

There are three simplified paths to addressing the world’s leverage problem. Debt can be reduced rapidly and with inevitable pain; it can be reduced gradually, thereby acting as a constant, destabilising headwind to economic growth; or it can be serviced into perpetuity. Since the first outcome causes both debtors and creditors to suffer, we can assume that leverage will be addressed – wherever possible – by the latter two means.

Judging from the absolute debt-to-GDP levels in key EM and DM regions, developed economies remain more leveraged, despite the perception over the last five years that the developed world has been de-leveraging while emerging world debt levels have risen. A 2011 Bank for International Settlements working paper examined debt’s drag on growth. It found that in OECD countries, when government or household sector debt-to-GDP ratios drifted above 85% of GDP and when corporate sector debt-to-GDP rose above 90%, growth was impeded. In most EMs, absolute levels of debt have remained below these thresholds – with Chinese non-financial corporates the clear exception.

Yet there is still reason for optimism, even if aggregate debt levels remain elevated across DMs. First, in the US, Europe and Japan, household sector debt has fallen post-financial crisis and is now low compared with long-run averages. Second, while DM government debt has risen, in many cases it remains below 90% of GDP, even after the massive balance sheet transfers of recent years. Further, with interest rates low, the danger threshold may be higher today than the levels inferred from historical studies. Finally, there is evidence that debt levels have begun to recede from their peak in the most important DMs.

Looking ahead to the next phase of the global credit cycle, developed and emerging economies will follow markedly different trajectories. Developed economies can maintain the status quo of elevated debt levels – provided interest rates remain depressed. More importantly, they have few alternatives. The most likely course for DMs is acceptance – effectively learning to live with higher debt levels.

Debt’s drag on growth will persist and along with it, downward pressure on interest rates. It may take a future economic contraction for governments to find it feasible to take the necessary steps to bring down the stock of debt. In asset terms, this points to lower interest rates, flatter yield curves and reduced returns for riskier assets.