EU finance ministers have agreed that a system that classifies what assets are “green” is the basis for the further action on the bloc’s sustainable finance strategy, according to European Commission vice-president Valdis Dombrovskis.

Dombrovskis, Commission vice president in charge of financial stability, financial services and the capital markets union, was speaking during the press conference that followed the ECOFIN meeting on Tuesday.

Vladislav Goranov, finance minister of Bulgaria, which holds the presidency of the EU council this year, said he believed “the views expressed today will provide food for thought to the Commission when finalising its action plan”.

The Commission is due to set out its official action plan on sustainable finance early next month. 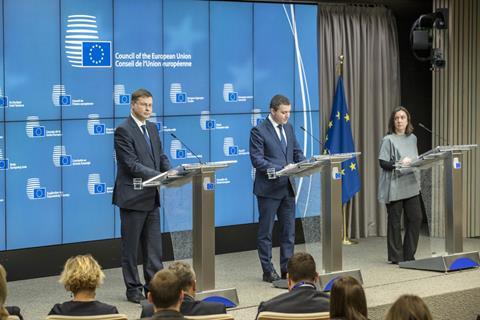 Source: Council of the EU

“It will help to address the current fragmentation of the market, and allow sustainable finance to reach scale,” he said.

The taxonomy would “act as the common trunk of sustainable finance, from which other actions in our action plan can branch off”, he added, and would be “a living document, evolving to keep pace with the changing realities of sustainable and green investments on the ground”.

It would initially focus on climate mitigation before expanding to “broader categories of sustainable investment at a later point”.

The Commission would present a proposal for legislation on the governance of the classification system before the summer, Dombrovskis said.

The Commission is also poised to follow through with plans to address investor duties, as flagged by a consultation carried out last year. Also in his Berlin speech yesterday, Dombrovskis said the Commission would present a proposal “to clarify the duties that asset managers and institutional investors have to take sustainability into account in the investment process”.

The objective was also to strengthen the transparency of these investors to help clients get more information and options for sustainable investments, he said.

The overall purpose of the action plan was to help the EU meet its climate change targets, which the Commission said would require €180bn of extra energy investments a year from the public and private sectors.

The European Parliament is preparing an “initiative report” to establish its position on sustainable finance in the EU while it waits for the Commission’s legislative proposals.

Molly Cato Scott, a British Green Party politician, is the lead on this within the parliament’s Economic and Monetary Affairs Committee, and told IPE that the committee was expecting legislative proposals from the Commission in May.