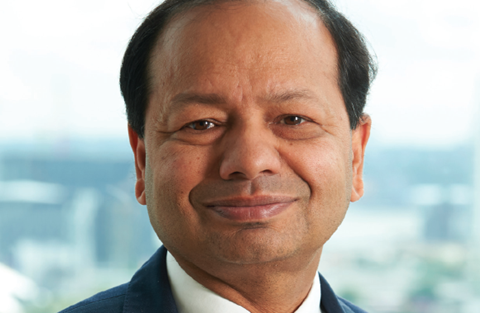 Unprecedented demographic changes are influencing Europe as well as the Middle East, Africa, Asia and Latin America. These are leading to political instability, youth unrest and strikes by pensioners and retirees or unions. There are a multitude of lessons even the most advanced pension systems could learn from these changes in order to prepare for a sustainable and adequate financial future. Implications are being faced in growth, public debt, asset prices and sovereign ratings, to name a few. Here, we highlight key demographic features to factor into retirement planning:

• Rapid growth of the very old age or 80-pluses: There has been a unprecedented growth in shares of the old and very old (80-plus) over the period 1970-2017. Japan has currently 8.1% of its total population in these cohorts, eight times higher than in 1970. There has also been an increase in life expectancy accompanied by falls in the fertility rate. In advanced countries  over 1985-2015, on average, life expectancy at birth increased by six years. In contrast, fertility rates have declined with the lowest levels (1.5 children per woman) in Japan and Germany.

• Changing consumers: the noteworthy feature of populations is the multi-generational structure combined with multiple stages of life rather than the traditional three stage lifespans that were considered the norm. Changing consumer life cycles, household sizes as well as multiple co-existing generations alter the average consumer paradigm used by macroeconomists and actuaries. Not only is the consumer behaviour different but so is worker behaviour. The current millennial generation does not aspire to a job for life or high pecuniary benefits accompanied by long hours.

• Changing workers: the average effective retirement age has not increased in line with life expectancy. We note from the figure that advanced countries such as Italy, Netherlands, France and Germany face additional fiscal burdens as workers are retiring earlier than the retirement age, creating fiscal strains.

• Gender parity needed: women live longer than men and in many European countries there are more female graduates than male. Therefore the gender gap in terms of both labour force participation and pay needs to narrow to utilise female potential.

In terms of labour participation, Japan has the highest gender gap (70% for male versus 50% for female). Other countries appear better but exhibit differences greater than 10%. The gender income ratio for France is the lowest but at 1.4 suggests that men still earn 40% higher than women. 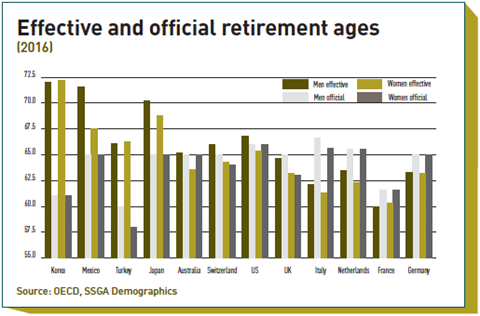 • Higher savings needed over working life: increased post-retirement periods and the inherently larger uncertainty accompanying the resource needs over the retirement phase. Given that the motive for saving becomes more important during weak economic conditionss, it should be important when facing periods of low growth and low interest rates. Higher savings should be part of an awareness and education.

• Managing government debt and fiscal deficits: global debt is at historic highs, reaching a peak of $164trn (€142trn) in 2016, or 225% of global GDP. The increase is driven by public debt, reflecting the economic collapse since 2007. Debt in advanced economies is at an average of 105% of GDP, whilst in emerging markets debt is close to 50%. Government debt and deficits are a cause for concern as well as a potential catalyst for dissent.

Although EU public debt reduced in 2017 due to economic recovery, in several countries the public debt levels have not decreased, and remain close to historical peaks.

In 2016, the revenue of public pension schemes represented 11.2% of EU28 aggregate GDP. Together with healthcare and long-term social care spending (6.8% and 1.5%), ageing-related expenditure accounted for almost 20% of EU28 public expenditure. It is projected to increase in the absence of reform. The pension replacement rates vary across the advanced countries as do the elderly poverty rates, calling for differential policy responses across different countries.

The article is based on a speech at the Global Pensions Dialogue conference in Amsterdam in May 2018.

Dr Amlan Roy is Global chief retirement strategist, State Street Global Advisors, research associate, LSE’s Systemic Risk Centre and guest finance professor, London Business School. The opinions expressed are the author’s own and not of any of the above institutions