Let me start to address the IORP II topic by asking whether the new pensions directive reflects the needs of IORPs. Readers of IPE recognise that occupational pensions are a benefit an employer provides to its employees, not a product sold to consumers. By definition, such pensions are linked to a workplace relationship and to sponsoring employers. 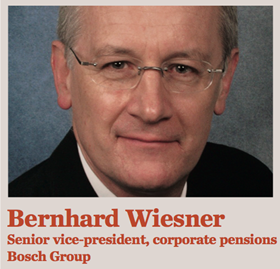 So no IORP exists without a sponsoring employer, and the future of IORPs is unthinkable without sponsoring employers. Sometimes legislators and even experts seem to forget this issue. So the real question is: does the new IORP II directive reflect the needs of sponsoring companies and their IORPs in Europe?

Let me start with a general remark. What companies and employers really need is a clear, reliable and encouraging environment. And this is particularly necessary in the area of occupational pension schemes and IORPs.

So with respect to the new directive: yes, sponsoring companies and IORPs appreciate it as a regulatory instrument designed for occupational pensions and their specific institutions. As such, it is separate and independent from any insurance or other financial business. So this draft directive supports a unique view of companies, social partners and authorities in this field, that citizens more than ever need the most efficient way to accumulate capital for retirement.

So the current opportunity is to achieve a legal framework that motivates employers and social partners in the member states to strengthen existing IORPs and establish new ones.

This brings me directly to the current IORP II process. First of all, let me emphasise it was undoubtedly essential that the Commission decided not to transfer any solvency rules suitable for insurance companies under Solvency II to IORPs under the new IORP II directive. The reasons for this fundamental decision are valid today and will remain so in the future. So with regard to the current draft, I would like to focus on three particular issues.

First, the definition of the regulated object is vital for any understanding of what or which specific characteristics need to be regulated. So the definition of an IORP must make unmistakably clear that IORPs are social institutions and not financial service providers. The wording of the current version defines IORPs perfectly correctly as “pension institutions with a social purpose that are active on financial markets”. The intensity with which some players are arguing just around this definition tells us about its importance.

Second, since IORP II sets the framework for future supervision of IORPs it is a core issue to adequately define the main objective of prudential supervision. We all know that a legislative objective is a core scale that sets standards for all subsequent rules. The current IORP II draft wording is very close to the Solvency II concept, which means necessarily that over a period of time the supervision under IORP II will be equal to the supervision under Solvency II. This would be counterproductive. The current IORP I says that the prudential rules “are intended both to guarantee a high degree of security and to clear the way for the efficient management of occupational pension schemes”. Prudential supervision under such an objective ensures, first, security to beneficiaries and, second, efficient management of occupational pension schemes, which is in the best interest of the beneficiaries, the IORP itself, the sponsoring companies and the social partners.

Third, IORPs are deeply rooted in national social and labour law. Their social function and the unique triangular relationship between employee, employer and the IORP is governed by pension and labour law, which is frequently collective labour law. This fact has to be implemented as a guiding principle of the directive and must be consequently followed in the regulations. The actual IORP II version is a step in the right direction and acknowledges the social function and the aforementioned triangular relationship as a guiding principle.

I would like to place particular emphasis on cross-border aspects. This is an important issue for companies, because they are always looking for efficiencies, such as improved governance and synergies on controlling, administration, asset management, transparency, easing employee transfers and so on. But, for the avoidance of misunderstanding, the main focus of cross-border activities is not the small but growing group of cross-border transfers. It should be on cross-border IORPs for entire domestic workforces creating major cross-border collective structures.

Let me close with some remarks with regard to EIOPA’s perspective on the whole area of IORPs and occupational pensions in the EU. EIOPA is in a key position to improve best practice and also on tailor-made prudential supervision of occupational pensions and IORPs in the member states and in the EU as a whole. This decisive position also involves within the scope of EIOPA’s tasks and responsibilities a substantial role as a key adviser to the Commission and Parliament.

It is worth encouraging EIOPA in such a complex area not to take the position of a regulating observer or even a pure technical regulator. It will be helpful and valuable to examine and explain to the legislator what, for example, the effects of for-profit or not-for-profit pension concepts via IORPs really are and which kind of regulatory environment may be helpful for each.

This is probably the most ambitious challenge in future prudential supervision – namely to enable the legislator to take the right path and the best options in EU citizen’s best interest.

Looking to EIOPA’s 2015 work programme, there are some topics in this direction. On the other hand there is also a topic likely to create significant concerns to IORPs and sponsors. This is the so-called holistic balance sheet for IORPs, which is treated as a kind of future back door threatening to introduce Solvency II mechanisms within the IORP regulation. This project is creating instability for IORPs, the sponsoring companies and social partners, which is not helpful for the future development we urgently need.

The legislator must provide as soon as possible sustainable and predictable clarity for the IORPs of sponsoring employers and social partners. It would be a fatal illusion to assume the needs for capital-based pension concepts in particular in southern Europe or in problematic areas of all member states can be solved by the mechanisms of sales-driven, with-profit ‘financial institutions’. Highly efficient, not-for-profit IORPs that people really can trust are urgently required.

Finally, we will all clearly be measured collectively: if we will see strong and significant growth on IORPs we will have been successful, but if we observe stagnation or even a decline we will fail. So let’s work for success in EU citizens’ best interests.