The pensions world is constantly changing. Demographics, policy and market changes mean that UK retirees will not only be living longer and entitled to the state pension later but, thanks to auto-enrolment, will be much more likely to reach retirement with defined contribution (DC) savings. More DC savers, coupled with recently introduced flexibility of access, will increase the levels of risk and complexity that people with pension savings face at and during retirement.

Given the increasing importance of DC pensions, in particular through the workplace, and the potential risks involved for individuals, it is important that they are monitored and analysed on a regular basis  to identify trends, issues and potential solutions.

This is why the Pensions Policy Institute (PPI), supported by Columbia Threadneedle Investments, publishes The Future Book, setting out available data on DC pensions, alongside commentary, analysis and projections of future trends. The second annual edition, published in September, highlights some important findings.

The introduction of auto-enrolment was perhaps the biggest pension policy change of recent years. The number of people saving for retirement in this way has increased in the past year – by July 2016, 6.5m employees were automatically enrolled. However, a further 5.9m individuals working for companies that had been through auto-enrolment were found to be ineligible, mainly owing to age or earnings. 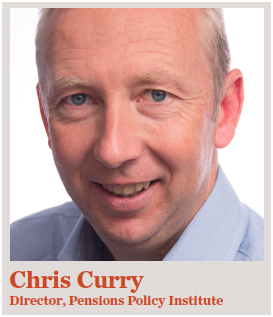 As auto-enrolment filters down to small and micro-employers, differences in outcomes are starting to emerge between larger and smaller firms. For example, opt-out levels have been lower than expected, at a steady at 9%. The government expects opt-outs to average 15% by the end of 2018 as minimum contribution levels phase up to 8%.

Those ineligible for auto-enrolment owing to age or earnings level may still opt in, and those earning above £5,284 (€5,839) but below £10,000 are eligible for employer contributions if they opt in. In 2015, 5% of employees had opted in to a scheme. Opt in rates are highest among employers with 250-499 employees (14%) and 1-19 employees (13%) and lowest among larger employers (4%). Those working for the smallest employers are more likely to opt in, but are also more likely to be ineligible for auto-enrolment.

One of the biggest challenges facing DC pensions is low contributions, and the levels of retirement asset and income that these low contributions generate. Contributions of 8% may not be sufficient to achieve an acceptable standard of living in retirement. A median earner contributing 8% into a pension scheme every year from age 22 until state pension age would only have a 50% chance of achieving the same standard of living in retirement as in working life (using private and state-pension income). However, people will not contribute steadily for their entire working life and would require a higher percentage of contribution to achieve a 50% likelihood of replicating working life living standards.

But employee contribution rates are falling on average as more employees are joining pension schemes for the first time and making minimum contributions. Employee contributions dipped from 4% and 3.2% (GPPs and DC trusts) in 2012 to 1% and 2.4% in 2014. The median is likely to increase again once higher contribution levels are phased in through auto-enrolment.

Median employer contribution rates have also decreased, from 8% and 5.3% (DC trust and GPPs) in 2012 to 3% and 4% in 2014. DC trust schemes have seen the biggest drop resulting from auto-enrolment. This is because master trusts are more likely to be used by employers enrolling employees for the first time and paying minimum contribution levels.

Despite low contribution levels, the introduction of auto-enrolment is likely to lead to future generations having large DC pots at retirement. Of course, they are also less likely to have DB pensions, so the overall impact on retirement income is less clear.

Prior to the introduction of the new pension flexibilities, most people used their DC savings to purchase an annuity, but in 2015, 6% of those accessing DC savings purchased an annuity. Conversely, the use of drawdown increased from about 20,000 new contracts each year before the flexibilities, to about 20,000 contracts per quarter in 2015, similar to the numbers of annuities sold. Lump sums have become popular, with almost 300,000 in the last year.

This year’s Future Book has highlighted a divergence in policy between how people build up pensions and how they subsequently use them in retirement. Most DC savers are faced with a dichotomous system.

During the accumulation phase, pension saving is governed by defaults as employees are auto-enrolled into the default fund.

However, once they access their DC savings, there are no automatic defaults, so people will need to make decisions. Without a default, some people may struggle to make choices that best suit their income needs in retirement because:

• Decisions on accessing DC savings are rated among the most complicated financial decisions;
• Most people do not have sufficient numeracy or financial literacy to understand the long-term implications of different methods of access;
• Behavioural barriers to decision-making can lead to people making the easiest or most accessible choice rather than the most appropriate one.