There is a clear relationship between companies’ environmental, social, and governance (ESG) credentials and their credit spreads, according to new research carried out by Hermes Investment Management.

The asset manager said that before its study, the Hermes credit team estimated the impact of ESG risk on valuations in anecdotal terms, but their subsequent research proved a clear relationship between ESG credentials and performance from a credit perspective.

The study enabled Hermes to develop a pricing model that allows it to calculate how much compensation – excess yield above that of government bonds – an investor should receive for a given level of ESG risk.

The research examined the relationship between Hermes’ assessment of a company’s ESG performance – captured in a quantitative ESG (QESG) score – and credit default swaps (CDS) spreads. It used CDS because it felt this offered the purest measure of a company’s credit risk.

Companies with the weakest ESG credentials, as captured in low QESG scores, tended to trade with the widest CDS spreads, Hermes found – indicating a higher risk of default. 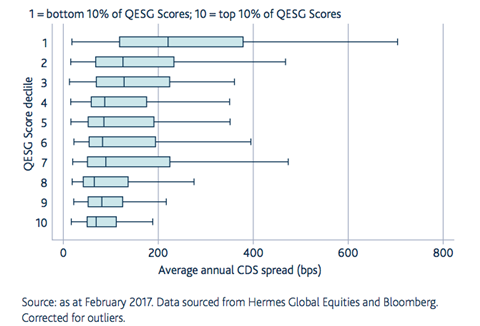 “Given that we know this, in order to deliver on our fiduciary duties we are compelled to assess and price ESG risks when making investment decisions.”

The correlation between ESG credentials and credit spreads was consistent but not linear, according to the asset manager. The greatest change occurred between the lowest ESG-scoring quintile of companies and the second quintile.

“For all three ESG dimensions, issuers with the lowest scores had the highest CDS spreads,” he said.

The asset manager’s research found that although there were correlations between companies’ QESG scores and their credit ratings, there was a wide dispersion of QESG scores within each rating band.

“This means that credit ratings do not sufficiently reflect ESG risks,” it said.

The asset manager said the model it developed would help it identify opportunities in lower-rated companies with higher ESG scores and to spot issuers at risk because their spreads were too tight relative to their ESG score.

Reznick said the decision to pursue the research was borne out of a frustration experienced by the credit team at not being able to price ESG risk as distinct from other more traditional credit risks.

He said that although a lot of work and intellectual capital had gone into analysing and understanding more traditional operating and financial credit risks and ESG risks, “there’s been very little done in trying to distil ESG risks from credit risks and price ESG risk”.

The UN PRI, for example, has an initiative to explore the more systematic integration of ESG factors by credit rating agencies, and last year Barclays published a study into impact of ESG on corporate bond returns. It found that applying ESG factors resulted in a “small but steady” performance benefit, with no evidence of a negative effect.