Accounting Matters: Who sets the standards?

You are what you know, the saying goes. And it goes without saying that the 211 comment letters the International Accounting Standards Board (IASB) received on its Primary Financial Statements (PFS) project will represent some diverse viewpoints.

You are what you know, the saying goes. And it goes without saying that the 211 comment letters the International Accounting Standards Board (IASB) received on its Primary Financial Statements (PFS) project will represent some diverse viewpoints.

One of the first letters to the IASB was from the Local Authority Pension Fund Forum (LAPFF). In that, the LAPFF argued that International Accounting Standard 1 (IAS 1) was a flawed accounting standard that fails to address such accounting constructs as capital maintenance and going concern.

The LAPFF was not done there. In September, its chairman, Councillor Doug McMurdo wrote to the UK Financial Reporting Council (FRC), which was itself consulting on a proposed comment letter on the PFS project. He warned that the position set out in the FRC’s draft comment letter had misstated the function or purpose of statutory accounts under the Companies Act 2006. The LAPFF copied this to the UK business minister.

In the letter to the FRC, McMurdo wrote: “The [FRC] draft response is fundamentally incorrect in law, and in a way that is especially harmful to the parties affected, in particular our member funds as large holders of UK shares in companies as well as the wider public,” before concluding it is “not acceptable to have the law requiring one thing and the FRC knowingly agreeing to something that is so obviously different.”

By way of a recap, the IASB’s PFS project is about updating IAS 1, Presentation of Financial Statements. In 2017, the board launched the effort to improve the quality of the information available to users of financial statements through targeted changes to the income statement, together with limited refinements to the balance sheet and the cash flow statement.

The September edition of IPE explored the project and the LAPFF comment letter to the IASB in detail, but it is worth recapping those proposals. In order to address the concern that there is a lack of consistency across entities in the way they report and present financial information, the board has proposed dividing the income statement into four new categories: operating, integral associates and joint ventures, investing and financing.

Outside of accounting standard setting, none of this would normally provoke excitement. But these are not normal times. At the end of 2020, the UK will sever its links with EU institutions and repatriate the powers – such as the endorsement of accounting standards – formerly exercised by Brussels. It is this, combined with LAPFF’s long-running dissatisfaction with the IFRS reporting framework that could see a legal challenge to any decision to endorse the new standard in the UK.

LAPFF’s position in its September letter to the FRC is that IAS 1 delivers the wrong accounting numbers and fails to deal with the purpose or function of statutory accounts under the Companies Act 2006.

“The letter,” explains a LAPFF spokesperson, “says the revised standard can’t be aligned with the UK’s legal framework for company law because it’s so defective. However many people end up sitting on the UK’s new endorsement body, they can only operate within the law. They will need watertight transparent legal advice.

“This means that they cannot do what we have seen in the past in the setting of accounting standards, which is to push a decision through by securing a majority in support of a particular position. The default is always obeying UK company law.”

But while that is the debate that is going on in the UK, what about the broader question of how components of pension expense in primary financial statements are presented?

There are worse places to start than the comment letter submitted by the Société Française des Analystes Financiers (SFAF). This group boasts more than 1,400 members in France. Its Accounting and Financial Analysis Committee represents analysts, fund managers and professional investors in the debate on accounting standards.

Moreover, one of the key consultation points that the SFAF addresses in detail is the definition of the operating category on the income statement. Indeed, you might remember that how sponsor entities present the various components of pension expense has been a long-running debate.

Back in January 2008, the European Financial Reporting Advisory Group, in conjunction with the UK accounting standard setter, the ASB, as well as standard setters from Germany, Italy and France, published a discussion paper on the reporting of pensions accounting. The move formed part of the pan-European Pro-active Accounting Activities in Europe initiative.

The paper’s authors proposed that sponsors should present service cost as an operating cost, the effect of changes in the discount rate and the actual rate of return on assets in financing, and actuarial gains and losses in profit or loss. These proposals were predicated on sponsors reporting an actual return on plan assets rather than an expected return, as was the case at the time.

The paper argued: “The fundamental point is that service cost is that part of the change in the liabilities for pension between one accounting period and the next that arises because pension benefits have been granted to employees in the period, generally in respect of their services during the period. It seems clear that this amount should be presented as an operating item.”

But in a break from this orthodoxy, the SFAS writes: “We would support including the financing component of pensions expenses in the operating section. We are aware that this point has been discussed heavily for many years, with no definitive arguments for either solution. We would nevertheless point to the fact that most companies manage pensions as a single cost, and they do not separate the service cost and the interest cost. 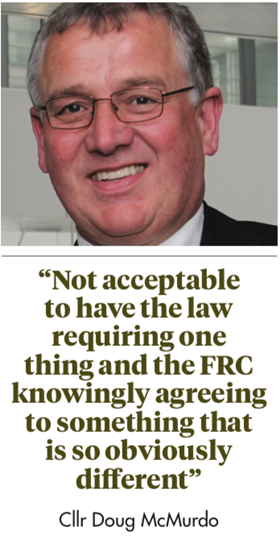 “Such a decision would also be consistent with the approach used by companies providing financing to customers as a main activity. We also note that cash outflows to pensions funds (or directly to employees) would in most cases be entirely classified in the operating section of the cash flow statement.”

It is worth adding that on page seven of the IASB’s proposals, the unwinding of the discount rate on pensions and provisions is classified as a financing item in a model income statement.

It is unlikely that the IASB will make any dramatic change to the way in which pension cost is presented in financial statements. However, the letter from the French analysts should serve as a nudge that these debates are far from settled.

It is a timely reminder that there is more than one way of looking at the same thing.