Ahead of the Curve: Avoid the crowds in EMs

Emerging markets (EMs) look set to be the most important growth engine of the 2020s as their consumption levels rise and China follows a saw-toothed growth path towards the economic top spot. However, asset-allocators need to remove themselves from the malign legacy of the 2010s if they are to tap this growth.

In particular, two tales of crowding illustrate what needs to be avoided. First, crowding of quantitative investment strategies (traditional quants) which has undermined the basis of these approaches.

Second, is herding behaviour of fundamental strategies into a common basket of names.

Traditional quants do similar things for similar reasons at similar times. This crowding has damaged performance over the past two years and will likely continue to cause turbulent performance in the 2020s.

Meanwhile, fundamental strategies are afflicted by behavioural biases, not least the herding behaviour of the past five years that has been evident as style-drift towards growth as managers crowded into a common basket of names, somewhat tying their fates as we enter the 2020s.

To successfully tap EMs, a strategy requires three attributes: positive differentiation; capacity awareness and a consistent style. These are qualities in short supply among traditional quants and fundamental EM managers. This article outlines how crowding has affected traditional quants and touches on the dangers of crowding in fundamental strategies, before concluding that in a crowded and unpredictable world it is good to be different.

Traditional quants are in a dark place. Performance, always relatively similar between strategies, looks ever more so and worse still, traditional quant returns are now more or less replicated by the MSCI EM Multi Factor index (figure 1). The reason is that traditional quants universally use factors, an approach that has dramatically misfired over the past two years, causing material underperformance versus fundamental. This has shaken confidence in traditional quants, which rely on, ostensibly, 1990s-era approaches (after Eugene Fama and Kenneth French), with similar inputs (the ‘factor-zoo’), using similar portfolio construction (based on co-variances), and into which capital has generally crowded over the past decade.

In short, it appears that traditional-quant investing is beyond its capacity limits. It is unclear whether factors have been permanently broken by this crowding or temporarily impaired.

Traditional quants’ performance commentaries fall down lines of economic interest but factors have simply become a victim of their own success. Some traditional-quant commentaries imply factors were due a period of underperformance, while others suggest the problem was with the way they were applied. Another view is that expectations of traditional-quant strategies have been too high; they have been over-sold.

Our analysis indicates that many traditional-quant returns did the opposite of what was expected over the past two years. Stocks that appeared to be higher quality turned out not to be; momentum reversed sharply in September 2019; correlation structures broke down in the final quarter of 2018, as a large portion of the market (mainly big tech) that had appeared to defy gravity sharply succumbed to it. Mechanistic rebalancing saw many traditional-quants blunder into a whipsaw of historic proportions.

It seems unlikely that these things might be down to bad luck, given that traditional quant strategies are farming a similar furrow which has attracted more and more capital over the past decade.

More capital in undifferentiated approaches is likely to diminish returns across the board and make what remains more volatile, as strategies herd out of one similar trade and into another. The indications are that this is what has happened over the past two years, a development that is unlikely to go away while factor investing remains popular.

While traditional quants may be down at present, they arguably provide consistent style characteristics such as a value tilt, small-cap exposure and, perhaps, reasonable quality. Fundamental strategies, however, are distorted by behavioural biases and have generally not proved consistent. The herding evident in many of these strategies over the past five years has resulted in a style drift towards growth driven by crowding into a basket of the same names. 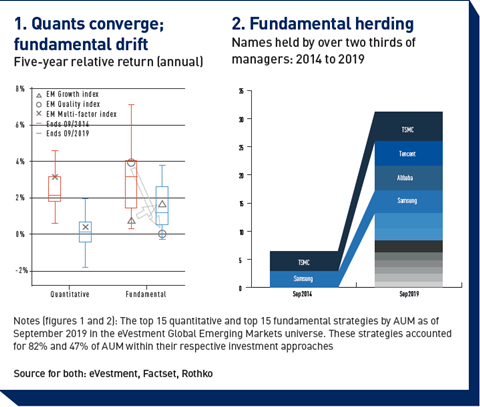 While in the five years to 30 September 2014, performance of the top 15 fundamental strategies by assets (according to eVestment) looked more similar to the MSCI EM Quality index, this drifted in the subsequent five years to the MSCI EM Growth index. Also notable was a concentration effect, where fundamental managers tended to concentrate their portfolios, reducing the number of holdings.

Fundamental strategies are highly likely to have benefitted from this crowding and we should heed the lessons from the reversal in crowding fortunes of traditional quants: false confidence; sharp  reversals; and beneficial gains that quickly and damagingly reverse.

These two tales of crowding has left a malign legacy for the start of the 2020s. It makes it vital for strategies to be positively different. EM remains an alluring but volatile growth engine but for investors seeking alpha, accessing it using traditional quants and fundamental managers comes with a clear health warning. Traditional quants appear ever more similar to each other and ever more like cheap multi-factor indices. Fundamental strategies have suffered herding, style-drift and crowding, tying fates to the same basket of names.

To complicate matters, passive investing in inefficient asset classes, such as EMs, has made little sense over the longer run (even after fees). Strategies need three qualities to successfully tap EMs over the next decade – positive differentiation, capacity awareness and a consistent style. With an explosion in high-quality data and computing power, new and different strategies do exist though.

In a crowded and unpredictable world it is good to be different.

Daniel Philps is the head of Rothko Investment Strategies. Richard Fairbairn and Timothy Law also contributed to this article