On the battlefield on which active managers fought their passive enemies for investors’ custom, there was one patch of higher ground that seemed easier to defend – emerging market equities.

● Active equities managers in emerging markets have underperformed on average over the long term, although not last year

● Top managers outperform, using methods that investors need to look out for

Active managers claimed a particular advantage in emerging markets, largely because they were shaped by more irrational exuberance and despair than developed markets.

The overall statistics tell a different story, however. In the 15 years to the end of 2019, 63% of active emerging market equities funds still in existence underperformed their benchmarks, according to Vanguard.

Vanguard has also worked out a more complete measurement, by including in the total of underperforming funds all those funds that liquidated or merged during the period. Vanguard says this makes sense because such funds tend to trail their benchmark before closure – by a great deal  in the case of emerging market equities. By this calculation, the total comes to 81%. Comparing this figure with developed markets, the number is similar to European equities funds, slightly better than for US equities, but slightly worse than for UK equities.

The emerging market numbers are only slightly less bad for shorter time periods – 77% for the past 10 years and 73% for the past five years. The average fund still in existence underperformed its index by 0.82% a year over the 15 years. This is a worse figure than for UK and European equities, although better than for US stocks.

S&P Global has data on specific countries. It lacks numbers for mainland China, the biggest emerging market, but in India and Brazil, 80% of funds in each case have underperformed their index in the five years to June 2020. South African funds did better, with 54% underperforming.

However, Fabiana Fedeli, global head of fundamental equities and portfolio manager in emerging markets equities at Robeco in Rotterdam, notes that the top 15 emerging markets equities funds have outperformed consistently over one, three and five years. This includes the Robeco Emerging Markets Equities fund, which has also achieved a cumulative excess return of 278% since its 1994 launch.

Fedeli notes that as well as outperformance, in some emerging markets such as China good active managers can offer something else. This is lower concentration risk – less exposure to a tiny number of high market cap stocks. For example, in November 2020, 21% of the Vanguard Total China index ETF was in just two companies – Alibaba and Tencent. Even the highest-conviction active funds do not have this level of concentration.

Sceptics argue that it is misleading to point to the outperformance of a small number of active managers, when considering the case of active versus passive. However, the high performers do tend to have more clients, so perhaps they should be considered more. On a weighted-average basis, emerging markets equities funds have outperformed by rather less over the past 15 years, according to Vanguard. Moreover, focusing on the winners has more validity if end investors have a fair chance of identifying the managers most likely to outperform.

Fedeli of Robeco says there are useful pointers to future outperformance. She lists three. They are to look for “long-term experience”, an in-house research capability and a repeatable investment process.

When it comes to repeatable investment processes, active managers need to be able to show they have systems that could generate regular outperformance. Fedeli points to Robeco’s analysis of the costs and benefits to different listed companies of adapting to a carbon-neutral future. China recently pledged carbon neutrality by 2060, and South Korea by 2050. This systematic analysis has already helped its emerging markets sustainability strategies to outperform, she says.

Developed market managers also like, of course, to refer to the edge they have over indices because of their in-house research. However, emerging markets active managers are even keener on doing so, for two particular reasons.

One is the fact that in many emerging markets, a high proportion of the stock market trading is by retail investors, who are more prone than professional active investors to being driven by sentiment than by facts gleaned from research. Retail sentiment can also significantly move whole indices. “China is the best example,” says Altaf Kassam, London-based head of investment strategy and research, EMEA, at State Street Global Advisors. “Retail investors play a much bigger part than in the US, Europe and the UK, where there’s a much bigger institutional presence that makes for a slightly easier game.”

This might explain why active equities managers did rather better in 2020, when many retail investors responded to the coronavirus crisis with wild mood swings. In Morningstar’s analysis of funds domiciled in Europe, 50% of global emerging markets active equity funds beat the MSCI Emerging Markets index, compared with only 34% over the past 15 years.

Active managers also like to point to the edge that their research gives them in judging country risks. They talk often of the value of ‘boots on the ground’, whether in local offices or on regular visits. Country risks are particularly acute in emerging markets, which tend to have less stable regimes. 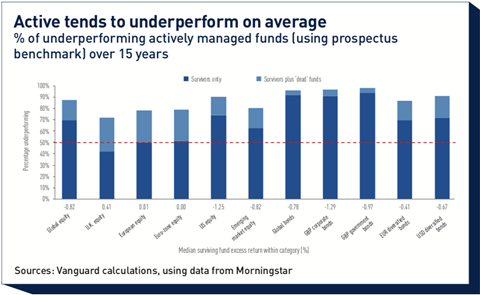 Judging country risk is certainly important in equities. Fedeli of Robeco estimates that, historically, country selection has added, depending on the strategy, 20-30% to its emerging markets alpha.

If anything, however, this is even more the case for sovereign bonds. Edwin Gutierrez, head of emerging market sovereign debt at Aberdeen Standard Investments (ASI) in London, gives the example of Argentina, where he eliminated ASI’s local currency debt after a 2019 visit. “There was a view that the market-friendly incumbent would be re-elected,” he says. However, he adds, “what I saw on the streets, including the anger, was not a recipe for a re-election”. This was brought home when he was caught up in a protest and missed his meeting with the economy minister.

Later that year, the incumbent lost the election, and in May 2020 the less-market-friendly administration defaulted, under conditions that hit local debt holders particularly badly. Even so, Morningstar figures for local currency bond managers, both sovereign and corporate, show that only 3% outperformed Morningstar’s benchmark over 15 years.

Active managers also enjoy the advantage that they do not have to “blindly buy bonds”, as Gutierrez puts it, when emerging market governments run into trouble, run up debt, and thereby increase their share of the index.

These advantages help to explain why active managers in emerging market sovereigns seem to perform better against their passive rivals. Marcelo Assalin, head of emerging market debt at William Blair Investment Management in London, says that among the 35 active managers in hard currency sovereign debt that he tracks, over the past five years two-thirds have outperformed strategies that are similar but passive. The William Blair Emerging Markets Debt Hard Currency fund, which invests in sovereigns and corporates, has outperformed its index by almost 10 percentage points since its March 2020 launch, helped by high-conviction trades such as a bet on

Angolan sovereigns after prices dropped on expectations of a disastrous default with low debt recovery. As of January 2021, Angola had not defaulted.