Briefing: Is equity duration risk about to step into the limelight?

In his memoirs, Sir Laurence Olivier tells how, in 1967, he was suddenly taken ill during a National Theatre production of August Strindberg’s Dance of Death. His understudy stepped into the role for just four nights, but in that short time, “.…walked away with the part of Edgar like a cat with a mouse between its teeth”.  A star was born. Fifty-five years later, Sir Anthony Hopkins, with a career just as stellar as his one-time mentor, was the oldest-ever recipient of an Oscar for best actor.

The biggest risks in portfolios are also often unknown before they surprise investors and demand their attention. In 2007, AAA securities called collateralised debt obligations (CDOs) were regarded as safe as the houses and mortgages that backed them. At the start of 2020, interest-rate normalisation was the theme before the COVID pandemic sparked unprecedented monetary and fiscal stimulus. Now headlines are dominated by the perceived risk of chronic resurgent inflation.

Equity-duration risk could also emerge blinking into the limelight. The figure shows just how real and present this danger is – a standard 60/40 bond/equity allocation is currently more exposed to duration risk than at any time going back more than a century, other than the early 2000s at the height of the technology, media and telecom (TMT) bubble.

“From an equity investor’s perspective, these may well be difficult markets to navigate,” says Colin McKenzie, senior equity product specialist at DWS, which has €859bn in assets under management. “The usual relationship between equity and bond yields [falling bond yields = rising equities; rising bond yields = falling equities] began to break down from 2000 onwards when inflation was constrained. That had knock-on effects for other established market relationships such as when small caps and value outperform,” he says. 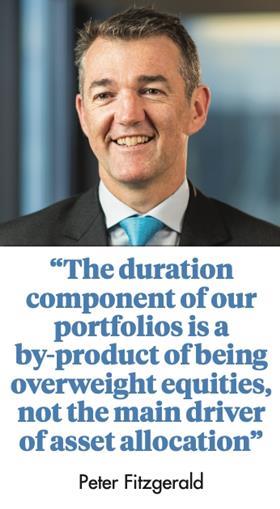 “The impact this has had on equity duration is probably the least well understood piece of this puzzle,” McKenzie says. “Value has taken a back seat and duration has lengthened across regions and sectors. The differentiation is historically low with a very few exceptions.”

Nowhere to run
For bond investors, duration risk is never far from their thinking. The weighted average time to the receipt of all coupons and cash flows can be expressed in risk terms as the percentage change in price for a given change in yield. Similarly, estimating equity duration begins by attempting to view price as a function of the net present value of future cash flows (familiar to equity investors as a dividend discount model). The higher the discount rate, the lower the value of the assets.

Equity cash flows can be volatile. A simplistic view is that they should rise incrementally in lockstep with profits. But when times are bad they can be quickly slashed to zero. Dividends are neither a right for shareholders nor an obligation for companies.

Martin Leibowitz, the former vice-chairman and chief investment officer of $1.3trn (€1.1trn) in assets TIAA-CREF, developed an approach to equity duration that recognised this, using the Franchise Factor Model (FFM). FFM separates the tangible value (TV) of a business (current operations) and the franchise value (FV, future business operations). TV can largely be thought of as existing investments where pricing and costs are quite sticky.

“The usual relationship between equity and bond yields began to break down from 2000 onwards when inflation was constrained. That had knock-on effects for other established market relationships such as when small caps and value outperform” - Colin McKenzie

Although these dimensions of duration are inherently bottom-up in nature, requiring stock-by-stock analysis, they can still be drowned by the macro backdrop. That is certainly true in the current environment of historically low interest and discount rates. The market capitalisation of the FAANGs (Facebook, Apple, Amazon, Netflix, Google/Alphabet) plus Microsoft (six stocks) make up almost a quarter of the S&P500.

Peter Fitzgerald, chief investment officer of multi-asset and macro at Aviva Investors, which manages €403bn, explains: “Over time, fundamentals such as the ability to earn returns above the cost of capital is what matters for equity prices. But when discount rates are so low, companies that may not have great earnings today but are expected to have very high earnings in the future, can be expected to trade at significant premiums.”

DWS embeds a rigorous bottom-up CROCI (cash return of capital invested) approach in its equity investment process, but McKenzie admits: “Even our high-quality interpretation of what represents value has been overwhelmed by a market environment dominated by macro factors, technicals and momentum.”

Canary in the coalmine?
For a brief moment in the first quarter of 2021, it seemed as though there might finally be a reversal of the trends that had defined equity outperformance over the previous five years – long duration versus short and its corollaries, growth versus value and US versus the rest. The 10-year US Treasury rose sharply, by 80bps to 1.74% and the long end of the yield curve steepened significantly. The MSCI World Value index outperformed growth by 9% and European equity indices beat their US peers.

Since then US 10-year yields have fallen to 1.29% and markets have reverted to type. However, inflation is now rising, as is the post-COVID prospect of gradual policy normalisation. “Could we see a more durable replay of Q1 2021? It is certainly a risk we are attuned to,” says Aviva Investors’ Fitzgerald. “But the duration component of our portfolios is a by-product of being overweight equities, not the main driver of asset allocation.”

For multi-asset investors, flexing duration is relatively straightforward. But investors with equity specific mandates face the more complex challenge of recognising the potential importance of duration risk in theory and practically reflecting this in portfolios. For example, research by DWS suggests the dispersion of duration at the level of the nine GICS sectors (ex-financials) is far more concentrated than might intuitively be expected – between 25 and 32 years using its methodology, if healthcare (the shortest duration sector) is excluded.

Neither do short-hand assumptions such as high growth equals longer duration necessarily work. According to DWS, the median growth of the highest-duration companies (top decile of duration) is significantly below that of the highest-growth companies. Meaningful differences in duration might only become apparent if you drill down to the regional and industry level.

For example, in the energy sector, the duration of European companies is lower than the US (median 18.6 versus 26.7). In materials, Japanese chemicals companies have markedly lower median duration than their US peers (17.5 versus 29.2). For energy, this regional disparity might be explained by differing approaches to capital investment. European companies are lowering capital investment on exploration for hydrocarbons, which increases free cash flow and lowers duration. Japanese chemicals companies have a poor track record on invested capital.

This sort of analysis takes considerable resources and a rigorously applied bottom-up framework for calculating equity duration. For both academics and practitioners how this is done is subject to considerable debate and may be difficult to implement. Equity duration is, however, a risk that is becoming increasingly difficult to ignore.

“Where we have latitude in mandates and can be overweight equities and underweight duration that is positioning we would look to adopt,” says Aviva Investors’ Fitzgerald. “Within equities, our sector allocations will be driven by tactical valuation views which may mean we hold European financials, for example, which are also relatively short duration. If being long and or short duration fits our macro view and might offer a kicker to performance that is great. But an equity sector or stock idea driven solely by duration is unlikely to make it into a portfolio. The correlations are too volatile.”