Briefing: The unbearable lightness of investing

Open the newspaper. Any newspaper. Read the front page and then the money pages. Absorb, assimilate, repeat. After half a dozen goes, a pattern is clear.

This is a paper of two narratives. The front pages are beset by worries over second waves, geopolitical and social tensions, economic turmoil and a painful uncertain recovery from the after-effects of COVID-19 and the ensuing economic paralysis. The business pages talk instead exuberantly about v-shaped recoveries and markets regaining their heights, with occasional fretting about the sufficiency of stimulus and the need for more.

Occasionally, trade wars and collapsing demand cross over but only insofar as they roil the sustainability of financial returns. Even then, there is an underlying confidence that clearer heads will prevail and we will muddle through. Indeed, one may go so far as to say markets and investors are remarkably sanguine in the face of what seems like an even more fraught global environment littered with tail risks.

This is cognitive dissonance in action.

Market meet economy
March 2020 saw the fastest bear market in US history, to be followed by the fastest rally. In less than five weeks, the S&P 500 fell almost 34%. As of the first week of June, it had regained much of its ground to sit back at where it began 2020.

In financial market after market, the same pattern has played out. Credit spreads widened to levels last seen a decade ago, before rapidly compressing again. WTI oil dropped to a negative $37 a barrel on 20 April, before yo-yoing back almost equally in the opposite direction to sit at a positive $37 per barrel by 4 June.

Turn to the economy, however, and the pattern disappears.

In the US, unemployment soared to 14.7% in April, before dipping slightly to 13.3% in May. Even a mild sense of recovery, however, was quickly dispelled when it came out that survey takers had mistakenly classified 4.9m people as employed. May was still an improvement, but it still stood at 16.1% after correcting for this error.

In the UK, 60% of businesses reported by May that their turnover was lower than normal ranges, while out of work claims have grown rapidly to north of 2m and to levels last seen in the early 1990s – a scarring period for many parts of the country. 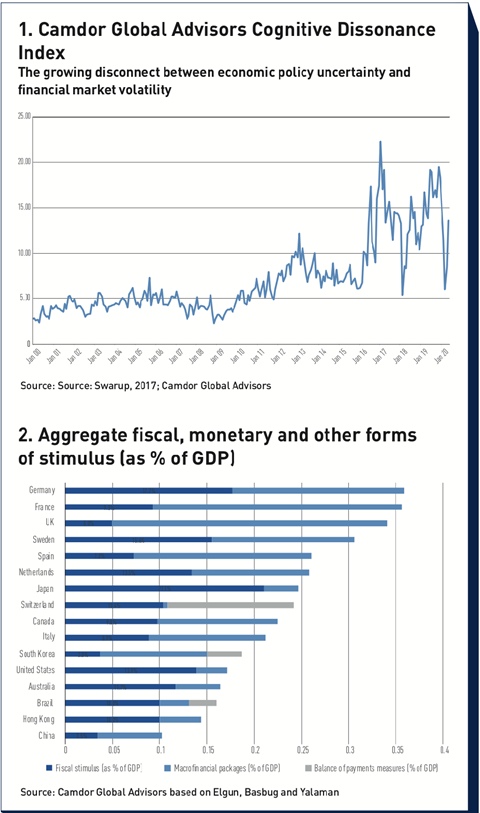 Globally, the International Labour Organization estimates that the equivalent of 300m jobs might be lost globally once job losses and cuts in working hours are taken into account. That is even before taking into account the impact of pay cuts that are appearing across a range of sectors and countries.

The OECD struck an equally positive tone as it said the Covid-19 pandemic had “triggered the most severe economic recession in nearly a century”. It forecasts global economic activity will fall 6% in 2020, with five years of income growth lost across the global economy by 2021. If a second wave appears, then the numbers are correspondingly worse.

It is hard to call any of this a positive backdrop, and given the shock to demand, it is even harder to contemplate a quick recovery to some former ‘normal’.

A clear divergence has appeared between economic uncertainty and financial volatility. This is not conjecture or argument but one borne out by hard data.

In recent years, measures of economic policy uncertainty have risen and are at elevated levels that are typically associated historically with financial turmoil. In contrast, measures of financial volatility (such as the VIX) have ground ever lower and, barring the odd jitter, sit at historical lows.

One can combine the two and track over time to create an index of their disconnectedness – a cognitive dissonance index (CDI), so to speak (figure 1).

The trend is a clear one and the disconnect today stark. The CDI has generally stayed in a tight band but began to rise after the last financial crisis, with the disconnect only worsening in recent years.

The implication is one of complacency. Financial markets are ultimately linked to the real economy and over the long term their behaviour must reflect the underlying economic reality. Either uncertainty must fall to match expectations, or volatility must rise to reflect the dilemmas facing policymakers today.

Living in the moment
At the heart of this divergence lies human behaviour and the perils of moral hazard.

Financial markets are not static entities. They are collective nouns for the actions born of the hope, greed, and fear of countless human participants. What they portray is emotion as much as any underlying economic reality and the volatility that we typically observe is driven by the competition between these emotions. Different worldviews vie for dominance, coalescing into temporary paradigms – transient accepted wisdoms – that ebb and flow over time, euphemistically creating the peaks and troughs of volatility we observe.

“The belief that policymakers will somehow muddle through and support markets, no matter what, has led to a growing disconnect”

After the financial crisis of 2007-09, central bank monetary support first sustained markets and then increasingly lulled investors into a comforting sense of security. Forward guidance accentuated this, and even as uncertainty has grown, the belief that policymakers will somehow muddle through and support markets, no matter what, has led to a growing disconnect.

From this perspective, the (near) absence of volatility is not a boon. It is a reflection of the fact that there are no competing world views. Clear signs are apparent of a herd mentality that has developed over the past decade and an entire generation that has grown up in a world of ultra-low rates and monetary accommodation.

Faced with a world of tail risks, the investment horizons of markets and their participants have shrunk, so that these risks and the vast uncertainties they represent now sit just beyond. Markets remain, then, in a comforting cocoon of omniscient policymakers, who will do what it takes to maintain the existing order.

Nothing has happened to shake that belief. Huge doses of monetary and now fiscal stimulus have flooded the financial system in recent months. Over 130 central banks cut rates in 2020, while large economies have devoted an average of nearly 25% of GDP to stimulus of one form or the other (figure 2). Is it any wonder that markets rallied while the economy cratered?

Markets have extrapolated this present largesse and ‘don’t fight the Fed’ mentality into the far future, imbibing a false sense of permanence. But economics cannot be divorced from politics, geography and society – all important influences on the course of money and economies historically.

The underlying reality is one of fragility, not strength – particularly when set against the growth in economic uncertainty.

Investors do not fully appreciate the stark choices facing policymakers today – from future demand, to supporting businesses, to creating jobs, to worrying about the growing debt burden across all parts of the economy. There are, in addition, the growing pressures of populism, fed by disenfranchisement and inequality.

Instead, they have derived a simple correlation between monetary (and fiscal) support and rising asset prices, even in the face of future uncertainty. But there is no mathematical or economic relationship between the two, merely a psychological link based on perception and faith.

It would be foolish to take that assumption at face value. Given the strength of anger amongst populations globally and the visible scars of inequality now emerging in the aftermath of Covid-19, future bailouts may bypass markets entirely and go straight to society.

And what happens when growth – that Holy Grail – finally returns?

Monetary largesse might be withdrawn, stimulus might be unwound and bailouts become a thing of the past. Now that would be terrifying given today’s reliance on these comfort blankets. Cognitive dissonance in reverse, with economies roaring and market whimpering, could become apparent.

There is something fundamentally wrong with a world where growth is to be dreaded. Long-term investors should tread with caution, grabbing their pennies for now but also watching that steamroller carefully lest it begin to move again.

Dr Bob Swarup is principal at Camdor Global Advisors, a macro advisory firm focused on independent actionable research and holistic analysis. He can be contacted on swarup@camdorglobal.com