Corporate reporting – certainly in Europe – is generally associated with a set of accounts prepared using International Financial Reporting Standards. At the same time, businesses also file supplementary accounts to meet a specific purpose such as dividend payments or tax liabilities.

But what about non-financial reporting? Increasingly, investors and non-governmental organisations (NGOs), as well as other stakeholders – even businesses themselves – have started to communicate a growing volume of non-financial information.  This might be information about a business’s environmental, social and perhaps even moral impact on wider society, as well as quantifying, for want of a better word, its values and governance and its strategy.

This proliferation of disparate demands creates the challenge of how business can communicate these ‘values’ to a range of both internal and external stakeholders. One possibility is for each business to set out that information as a free-form narrative in a separate report. Invariably, this could lead to a reporting landscape where companies use numerous methods to report on a near-infinite array of topics.

In many ways, this can be seen at the moment with the widespread criticism that the abbreviation for environmental, governance and social (ESG) might just as well be spelled with a single letter ‘E’.

Perhaps unsurprisingly, this diversity in the marketplace has prompted a number of sustainability framework standard setters and sustainability metrics to fill the void.

Some of the most prominent include:

● Organisation for Economic Co-operation and Development Guidelines for Multinational Enterprises

Each set of these sustainability reporting frameworks standards has its own particular focus, strengths and weaknesses and devotees. So, for example, the CDP framework aims to provide investors with information about climate change, water and carbon emissions, whereas the SASB framework is about providing US investors with a set of industry-specific metrics.

Together with these reporting frameworks sits the Task Force on Climate-related Financial Disclosures (TCFD). The Financial Stability Board set the TCFD up in December 2015 with a remit to develop a set of voluntary climate-related financial risk disclosures. The aim is to encourage companies to communicate information about the risks they face from climate change to both investors and the wider public.

But the story does not end there. Enter the International Integrated Reporting Council. The IIRC describes itself as a “global coalition of regulators, investors, companies, standard setters, the accounting profession, academia and NGOs”. Its remit is wider than any single market, for example, the SASB, or any specific problem or group of problems – say, the CDP and climate change.

Instead, central to the notion of integrated reporting is the mission to explain “how an organisation creates value over time”. The IIRC framework starts from the premise that an organisation relies on six so-called capitals for success. These capitals are: financial, manufactured, intellectual, human, social, and natural capital. And it is through this prism that integrated reporting sets out to produce an analysis of the organisation’s value-creation process (see figure).

“Investors were having to scramble around in the reports and they didn’t have a single idea whether it be sustainability information being used by the board because often the sustainability reports would come out later than the annual reports.

“And what we needed was a new framework that enabled us to think about performance through the prism of value creation rather than through the prism of financial discourse and financial transactions in isolation, which was also quite often historic in nature. Essentially, we had a world in which sustainability data was disconnected from seeing the board and the management decisions that the company was making. And so integrated reporting was born.” 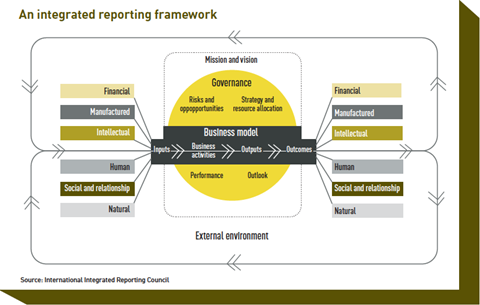 And Labrey agrees that the issue of fragmentation is a challenge within non-financial reporting right now. “There are financial reporting standards and sustainability reporting standards and each one of them produce really great data. But if you can’t plug that data into a strategy or into a business model, if you can’t articulate how that information is being used to change the products and services that have been used to build value over time, and then go on to communicate in a really clear way what the implications of that information are for other parts of the business.

“What investors want us as standard-setting organisations to do is come up with something that’s more harmonised, something that’s more complete so that they have got the data to set against the strategy overall. At the moment, yes, there are different organisations and none of them has an overarching legitimacy in a system like IFRS, which developed over many years after the G20 endorsed it.”

But away from corporate reporting, asset managers and their advisers are also making greater use of non-financial reporting metrics. Amandeep Shihn, head of emerging markets equity and sustainable investment manager research at Willis Towers Watson says his firm takes the view that it is impossible to divorce an asset manager’s sustainability credentials from the overall assessment of that manager.

“When assessing asset managers from a sustainability perspective,” he says, “we look at how ESG issues are integrated within the manager’s investment process and how they execute their stewardship responsibilities such as voting activities and corporate and industry engagement. We assess managers based on a mix of qualitative and quantitative metrics, in line with industry expectations set out by the Principles for Sustainable Investment (PRI), TCFD and a mix of international stewardship codes. 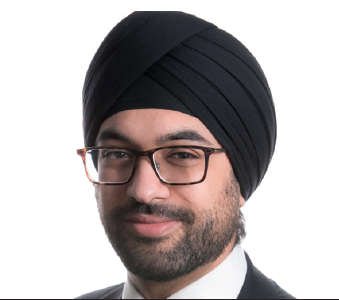 “Our assessments of fund managers’ activities are asset class dependent; we would expect different things from a public equity investor to a fixed-income investor. We also use frameworks such as SASB and TCFD alongside data from third parties such as TPI, to help with our assessment of ESG integration within a fund manager’s investment process.”

It is almost inevitable that the marketplace for non-financial reporting will coalesce around a single set of standards. And it is equally possible that the EU’s European Green Deal initiative will provide the impetus for a process of consolidation akin to the bloc’s adoption of IFRS in 2005.

But with Europe poised on the edge of a green investment revolution, perhaps the most persuasive argument in favour of a single set of non-financial reporting standards is the fear that the lack of an authoritative benchmarking framework could leave us rushing headlong into a new financial sub-prime crisis.