Global statistics indicate that while new cases of COVID-19 are rising, case mortality is stable at about 4,000 per day. The situation is in hand, but the danger is not over. First, the Americas, dominated by the US and Brazil, are confronted by rising case statistics. Second, there are signals of a rebound in autumn, both in theory as medical experts embrace the thought and in practice, as the figures in Iran show. Third, the equality protests increase the chances of a second wave.

Asset allocation
Last month’s correction of May’s irrational exuberance has continued, albeit differently for equity and bonds. Net equity sentiment has converged between 20 and 25%. The UK is an outlier at 11%, as anxiety intensified with the EU’s bid to prolong the trade negotiation rejected by London.

Net bond sentiment is clustered between -10 to -12% with the EU an outlier at -20%. As a result, the net sentiment curves have moved closer together, more in line with a predicted depression. If equity is preferred, it is due to the hope of a short depression.

Country allocation
While the gap between US sentiment on equity and bonds is closing, there are still analysts expecting a boom. Net equity sentiment is at the pre-COVID-19 level while bond sentiment seems reasonable, but unprepared for a second wave. EU net bond sentiment has shot to a one year high, pointing to negative growth expectations, coupled with a lack of enthusiasm for bonds as protection. Perhaps the possibility of negative interest rates is a chilling factor. UK equity sentiment is falling, while bond sentiment remains flat. Remarkably, the no-change score is up for bonds, down for equity. There must be an element of post- Brexit political uncertainty in the equity trend. In Japan, the positive vote for equities still looks high, while bond sentiment is returning to a traditional level of about -10%. Read alongside the elevated neutral vote for both equities and bonds, it indicates that for the time being, nothing will change. 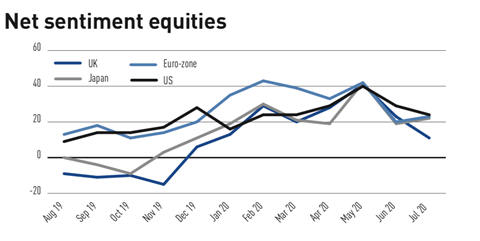