European pensions legislation raises the possibility of a new kind of consolidation vehicle that could also accommodate large Dutch mandatory industry-wide pension funds. A ‘pension depositary’ – a vehicle included in the IORP II directive – could play such a role.

However, the depositary – not to be confused with the custodian – has much more potential, says Hans Van Meerten, professor of international pensions law at Utrecht University, and Marvin Vervaart, head of product development pensions at BNY Mellon.

“It offers the possibility to bring pension plans together while keeping their assets separated. And the depositary could take over the purchase of services, such as asset management and administration, in order to improve efficiency and cost saving,” says Vervaart. 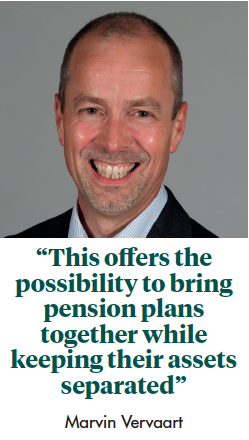 According to Van Meerten: “The big difference is that participating schemes don’t have to liquidate if they participate in a depositary. They keep their board and there won’t be a collective value transfer of assets. However, the legal ownership of the assets would be transferred to the depositary, under solid arrangements, of course.”

Vervaart adds: “One of the advantages of the new vehicle would be that it would also enable mandatory sector schemes to participate.  Currently, industry-wide pension funds cannot join the popular Dutch consolidation vehicle APF as they are not permitted to segregate their assets. “Their only option is a merger with another sector scheme. However, this would also require merging their assets, which is not always possible due to differing coverage ratios.”

According to Vervaart, joining a depositary could also be attractive to company pension funds that are reluctant to be fully absorbed by an APF. “As it doesn’t need to close, withdrawing from the ‘co-operative’ would be easier,” he says.

Van Meerten emphasises that participating pension funds would not have to share all activities immediately. He says: “They could jointly set up things step-by-step. The depositary could be a place where schemes could gradually grow closer, with the aim of a full merger ultimately.”

He argues that another advantage would be that a depositary, contrary to pension funds, would be exempt from paying value-added tax, as it is an organisation carrying out collective asset management. “It is clearly not a pension fund offering guarantees,” he says.

In the opinion of the legal expert, it would be easy to establish a foundation or a limited company to carry out the depositary task. “The Dutch supervisor, the Authority for Financial Markets (AFM), issues the licence and carries out the supervision of the co-operation between the pension fund and the consolidation vehicle,” Van Meerten says.

“A depositary could be established by both pension funds and commercial players. However, the experience with other vehicles in the Netherlands is that it is usually the latter who take the initiative.”

According to Vervaart, BNY Mellon is assessing whether it could establish a depositary itself. By giving it publicity, his company is gauging the interest in the market, he says.

Vervaart says the depositary would be free to shape its own governance. “We could imagine a covering board, with a joint stakeholders body occupied by representatives of the pension funds in the various asset compartments.” It would also be possible to share board members – in other words, that someone could be both on the board of an affiliated scheme and the depositary, adds Van Meerten.

Depositary has a European passport

As the depositary vehicle is an offshoot of the European Pensions Directive IORP II, it automatically obtained an EU passport for the member states as well as Norway, Iceland and Liechtenstein, in the European Economic Area (EEA), says Van Meerten. All countries had to align the IORP regulation with their local legislation within two years of the ratification of the directive. The deadline for incorporating IORP II into national law was January 2019. However, Van Meerten notes that some countries still had supervisory regulation in place that was at odds with the directive. He adds that, as far as he was aware, the concept of a depositary had not yet been applied elsewhere in the EU.

The professor emphasises that it would not be hard to get the depositary licensed in the Netherlands. “The vehicle has been described in the articles 33, 34 and 35 of IORP II, and has been incorporated in the Dutch Pensions Act (Pensioenwet) as well as Financial Supervision Act (Wft), as part of the implementation of IORP II in Dutch legislation.

“This happened in a very simple and pragmatic way. Dutch legislation already comprised articles enabling a depositary to operate, although only for PPIs. By generalising these articles, the legislator enabled all pension institutions to use the vehicle. The number of legal rules for starting a depositary is limited.”

Van Meerten makes clear that he does not agree with the Dutch legislator’s assessment, in a clarification of the IORP implementation legislation, that the pension depositary did not mean much in practice, because of the additional costs: the idea is to save on costs. “Maybe the legislator has underestimated the potential of this vehicle.” 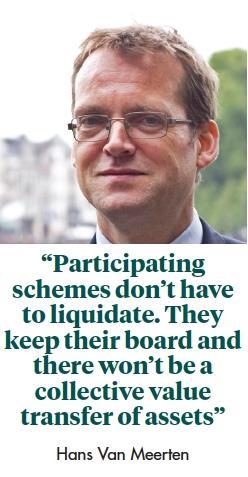 Van Meerten did not exclude the possiblity that supervisor De Nederlandsche Bank (DNB), or the minister of social affairs, would devise additional requirements for the IORP II arrangement. “But compare it with a pensions administrator or a provider. They can operate without a licence and don’t have to meet many specific requirements. And a vehicle like this could, in principle, be established abroad – for example, in Belgium, and serve the Dutch market from there. IORP II allows for this.”

In Van Meerten’s opinion, transferring legal ownership of pension assets is not unsafe. “I can imagine that it raises questions, but this construction is common practice at investment institutions and never poses a problem. The economic ownership remains with the pension fund which mandates the depositary, as you can’t do anything with legal ownership in itself,” he says.

“The pension fund could withdraw the power of attorney, based on the arrangements in the contract. Rules addressing the issue already exist for the PPI depositary.”

The professor emphasises that a pension fund should not transfer all its responsibilities, such as asset management, administration and its administrative bureau, to the new pension vehicle in one go. “The depositary is likely to become a place where pension funds pool several tasks. This way, they could gradually grow closer. And if things go well, the moment could come to take the plunge towards a full merger.”