In March 2020, COVID-19’s epicentre was moving west from China, heading towards Europe: already the Italian region of Lombardy was being locked down.

Tan Suee Chieh, now president of the UK’s Institute and Faculty of Actuaries (IFoA), was blogging and tracking the pandemic, needing to verify projections he was making on the number of infections reaching one million by early April.

He contacted actuaries he knew in the UK through LinkedIn. These included Joseph Lu, director, longevity science at Legal & General, and Nicola Oliver, a former public health specialist and epidemiologist, now director of life and health with the research company she co-founded, Medical Intelligence.

Nick Spencer, chair of the IFoA’s sustainability board, suggested that Tan contact Stuart McDonald, head of demographic assumptions and methodology at Lloyds Banking Group, who was saying the same thing on Twitter.

Over the weekend of 7 to 8 March, the idea of an informal group outside IFoA emerged from their discussions.

It was quickly agreed that a multi-disciplinary group needed to mobilise the profession’s response to the crisis. The initial members were Matthew Edwards, Nicola Oliver, Joseph Lu, and Chris Martin, Daniel Ryan and Craig Butler.

The COVID-19 Actuaries Response Group (ARG) was first convened on 10 March 2020. Instinctively, the group knew that humanity faced a global crisis of epic proportions, and had to do what it could quickly, meaningfully, and thoughtfully.

Now numbering 12 members with a range of specialities, from actuarial to medical, the group’s aim is to help people understand and respond to the crisis, and establish itself as a reliable source of information.

“The aims are to learn, share, educate and influence,” says Tan.

That, he says, was the ARG’s objective. But, that this could also lead to the IFoA confidently finding its voice in the public domain, was Tan’s thinking as he prepared for his presidential inauguration in June 2020.

He says: “COVID-19 is a tragic event of epic proportions, but it gave us an opportunity to unlock our expertise and revive our public interest role to address not only longevity but other related areas as well. It is a way for the profession to make itself more relevant and more widely heard.”

The concept of the ARG as a group of professionals dedicated to studying the wider scheme of things, beyond the immediate area of its own point of view, is shared by other group members.

The ARG’s target audience was originally the actuarial profession, but its reach has grown beyond expectations, says Edwards, a Willis Towers Watson actuary and longevity specialist. Edwards is also ARG co-chair, along with McDonald and Oliver – an arrangement reflecting the group’s collaborative nature.

Getting to know… Tan Suee Chieh

Born in Malaysia and based in Singapore, Tan Suee Chieh is a true citizen of the world, in a philosophical and geographical sense.

Tan holds degrees from the London School of Economics and Columbia University, alongside fellowships from the Institute and Faculty of Actuaries (IFoA), Society of Actuaries (in the US) and Singapore Actuarial Society, as well as being a fellow of the Royal Statistical Society.

As the current IFoA president, and with a high-profile track record in the insurance industry, he sees himself as an enabler in broadening the relevance of the actuarial profession outside the narrow remit of longevity statistics.

But global risks are not restricted to the virus, he says: “We see many inter-locking systemic risks. We have had the global financial crisis, the loss of biodiversity, climate risk and other events besides the pandemic – all of this has increased because of globalisation, networks and societal emphasis on growth.

“This all has an impact on sustainability,” he says. “As risk professionals, we have a public duty to help ensure the systems we live in are more sustainable.”

Tan’s passion for psychology led him to take a sabbatical in 2002 to complete his Masters in social and organisational psychology and this has informed his work with the ARG. He says the debate on COVID-19 has spread to other social issues.

“The zeitgeist has changed,” he says. “There is a range of choices as to how active actuaries could be in terms of issues ranging from economic security equality to climate risk, and these include the use of social media such as LinkedIn and Twitter.”

He adds: “COVID-19, climate risk and inequalities highlighted by Black Lives Matter are all relevant as they impact sustainability. As actuaries we cannot take action on everything, but we can take a more active and positive role in the public debate. This speaks to the voice and thought leadership of the profession.”

The ARG has published over a hundred bulletins, covering not only the mortality implications of COVID-19 but also vaccine efficacy and approval, hospital admissions and R estimates from sources around the world. Bulletins are published on its website at www.covid-arg.com and on LinkedIn, Twitter and Facebook.

Several of these reports have considered the medium and long-term longevity impacts of COVID-19. For example, a bulletin on the longer-term mortality and morbidity impacts of the pandemic examined the consequences of COVID-19 relating to:

• Economic shock – heavy reductions in GDP for the large western economies predicted by the OECD are likely to mean reduced government funding for health.

• The physiological impact on ‘severe symptoms’ survivors. These include lung scarring and cardiac damage. Such problems are set to be significant, on the basis of fallout from the severe acute respiratory syndrome (SARS) pandemic in 2003 their prediction has been borne out with the emergence of ‘long Covid’.

• Behavioural changes, such as in alcohol usage, smoking, diet and exercise.

• Mental health – here, isolation and extreme uncertainty, plus the possibility of unemployment, are likely to provoke mental health problems, for example, affecting an estimated 500,000 people in the UK. Post-traumatic stress disorder (PTSD) was a common condition among SARS survivors.

The conclusion was that the sum of all four factors – and given the impact of behavioural changes will probably be short-term – is likely to be material and negative.

The impact on survivor mortality – of importance to pension funds and life insurers – is examined in another bulletin.

This points out that COVID-19 mortality is associated with risk factors such as obesity and diabetes that also imply higher ‘normal’ (all-cause) mortality. One effect could be that the overall mortality of the post-pandemic ‘survivor pool’ turns out to be lighter than before.

The bulletin sets out how this impact might be estimated. The example it uses shows that the effect is likely to be low, other than in subgroups with a high proportion of COVID-19 deaths. 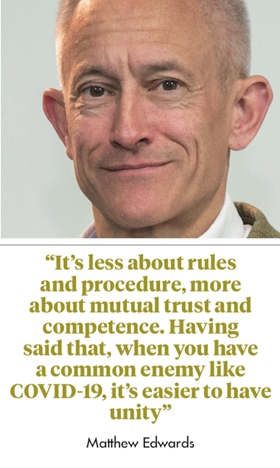 However, there is no good research on the effects of mass lockdowns, rather than the individual social isolation that is already known (which may partly be caused by, rather than causing, bad health), and the studies looked at are more suggestive guides to possible impacts.

“With much of the next year, if not beyond, likely to involve continuing social distancing and isolation in various forms for many parts of society, we need to consider the possible mortality impacts of such isolation,” says Edwards, writing in October 2020. “The onus of enforced or heavily prescribed isolation is likely to fall on the oldest, and this may have a material impact on longevity.”

At the time, Edwards suggested a plausible scenario to estimate the impact of this would be to assume that 50% of the over-75s endure a long period of either ‘formal’ social isolation or heavily reduced social participation.

He says research implies that scenario could lead to a 25% to 50% increase in mortality for one to two years for those affected. This would be equivalent to anything from an increase of 12.5% to 50% in a typical year’s deaths for the over-75s, although perhaps spread over several years.

Considering the effects of COVID-19 as a whole, Edwards concludes: “We think its longer-term impact on mortality will be negative. It probably won’t be the case that life expectancy declines. But mortality improvements will be lower.”

There is a great deal of flexibility involved in the group as a whole, particularly in trying to avoid the need for unanimous decisions, says Edwards.

“It’s less about rules and procedure, more about mutual trust and competence,” he says. “Having said that, when you have a common enemy like COVID-19, it’s easier to have unity.”

The group meets for an hour over Zoom initially weekly and now fortnightly to discuss the strategic issues and ideas, with, of course, frequent WhatsApp and e-mail contact in between.

Most UK members of the group already knew each other, given their leading roles in the industry, but Tan and other non-UK members have met only ‘virtually’ – for instance, Tan has never met Edwards or McDonald.

“COVID-19 is a human tragedy but it may have changed the way we work and create,” Tan says.

But he says he has now “met” all IFoA council members: “Thanks to Zoom, I’m meeting more people than ever.”

Looking to the future, Tan says that one of the few positive outcomes of COVID-19 is that the ARG could become a model for bringing other strategic and thought leadership issues under the IFoA umbrella for discussion.

“It is a bottom-up creation which can shine a light on areas of focus,” he says. “Other subjects may not be as immediately compelling as COVID-19, but are no less important. The ARG has been and continues to be a forum for ongoing work. It can produce measured, erudite and long-term output to give actuaries guidance and help them to learn.

“The ARG has pointed the way for the IFoA to be slightly bolder and more imaginative in our public engagement, but always in a manner which does credit to the profession,” he says.

In the short term however, and with the hope that the world is close to the end of the second wave of the virus, there is a more immediate aspiration.

“We hope that we’re gradually winding down and the vaccine will make us extinct,” says Edwards. “We’d like to not have a reason to exist.”