3
US investment grade: A year for not living dangerously
Home

US investment grade: A year for not living dangerously

Geopolitical uncertainties are pushing investors away from longer-term strategies

Investors in US investment-grade fixed income may find 2020 is a year for clipping coupons rather than stretching for yield. Are they being compensated for taking extra risk? Global and domestic uncertainties loom, from trade wars with China to the US presidential election. Pruning portfolios to focus on higher quality names may help defend against an economic downturn.

It is impossible to pinpoint our position in the cycle but clearly we are at a later stage. “We don’t know exactly when shocks are coming but in late cycle they have more impact because there is less capacity to cushion them,” says Frank Rybinski, chief macro strategist at Aegon Asset Management in Baltimore. And in an extended slow-growth environment even a small pullback has an amplified effect.

Geopolitical risks prompt investors to take a shorter view with their trades, and such short-term volatility can impair bonds. For example, suppose the US and China manage to reach a satisfactory trade agreement. Some inflation bulls – who tend to see the glass half full – will fear that happy outcome could conversely kindle upward inflation, tarnishing the potential demand and productivity generated by a deal between the world’s two largest economies. Investment-grade securities would still probably weather such inflation. But danger might arise if inflation triggers recession – in which case, all bonds would sell off.

Wayne Wicker, chief investment officer at Vantagepoint Investment Advisers and ICMA-RC in Washington DC, wonders whether a slowdown would be the result of inflation or decreased demand. If the former, he says, inflation will be tempered by today’s disruptive technologies, which have “increased efficiencies in manufacturing, delivery, and other facets of the production life cycle. Between technology and traditional business, improvements in extracting energy have had a dampening effect on how inflation flows through the system. Wage inflation would probably be contained below the 4% tipping point. What’s different this time is the broad array of technologies that increase efficiencies and reduce dependence on humans.”

Liquidity remains a wildcard. If it erodes and spreads widen, dealers can rapidly become conservative, as happened in the fourth quarter of 2018. “The transmission mechanism gets stripped of its capital,” says Bill O’Neill, senior portfolio manager at Income Research & Management. Many factors can trigger a freeze or lock up, including the prospect of regulatory change. Or, if commodity prices drop, investors may fear for loans to certain industries; market makers might go on strike, not wanting risk on their books; and that sets off a domino effect.

With hindsight, it has become clear that excessive leverage wreaked havoc on all credit markets, including investment grade, in the 2008 crisis. Credit investors keenly monitor leverage, assessing both credits and issuers, to ascertain that borrowing is increased for the right reasons. Especially toward the end of a cycle, it might be the wrong time to expand operations. “You don’t want to lever up, then experience a downturn, and find your rating is reduced,” warns Brian Ruffner, senior investment analyst/portfolio manager at Federated Investors in Pittsburgh. 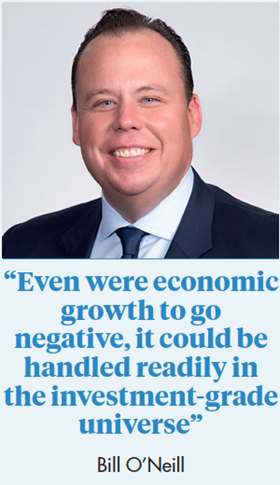 Over the past decade, the proportion of BBB-rated securities in the investment-grade cohort has swollen, from about one third to a half. Those firms have also increased their leverage, from about 1.2 to 2.2 times, expanding net debt relative to earnings before interest, tax, depreciation and amortisation (EBITDA). “That isn’t necessarily a catalyst for a downturn, but more issuers in that category will struggle to maintain an investment-grade rating,” says Dave Leduc, CIO, active fixed income, at Mellon in Massachusetts. He adds: “As top-line growth slows and margins compress, it will be harder to generate enough cash.” 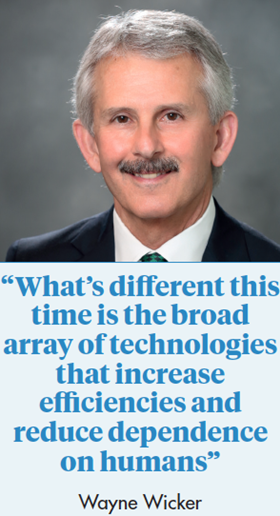 Should growth decelerate, absent a total collapse, the picture for investment-grade bonds is not all bleak. As long as cash flows remain steady, without becoming recessionary, the ability to pay bondholders will stay intact. That provides a level of comfort, in contrast to highly levered companies which need robust cash flows to grow out of their debt. BBB ‘fallen angels’ may be demoted below investment-grade if growth dries up and leverage ratios start to increase. However, in the past three years there have been far more rising stars than falling angels.

At present, cash flows are diminishing faster than debt is growing, and it would take a severe contraction to reverse course. “We   don’t see imbalances in the system, as in 2008. Credit, the lifeblood of the economy, stopped its circulation then,” says Rybinski.

The ‘least-dirty shirt in the laundry’ theory may prop up US credit markets again. If American securities were to roll over, global markets would fare worse. In a return to derisking, corporate bonds may gain. Although spreads would widen, “Our markets are the best and, paradoxically, the most liquid sectors benefit,” says O’Neill.

Although leverage has reached a secular peak for investment-grade, O’Neill takes solace from the level of interest coverage, which represents income over the debt burden. In other words, debt is serviceable because coupons are still so low.

The good news is that companies have been proactive against being downgraded. “Large issuers have more flexibility to cut costs, reduce overhead, and implement efficiency and consolidation measures,” Leduc says. Large-cap industrials, such as Anheuser Busch, ATT, GE and Verizon have all been taking steps to avoid slipping into high-yield ranks. As the cycle turns, the giants are leading the way to avoid falling victim to a sudden top-line contraction. Smaller firms also take note of those precautions.

In early 2019, the spreads for investment-grade indices over Treasuries stood at 150bps, before contracting. “It will be hard to push them materially tighter, say, to 30 or 40bps,” says Rybinski. If in 2020 spreads oscillate by about 100bps above or below, what forces might drive them in either direction? The news cycle, like Chinese tariffs or an Elizabeth Warren democratic nomination, would clearly play a role. On the supply side, M&A has been “lumpy”, says Ruffner, with about 4% less gross corporate issuance in 2019. 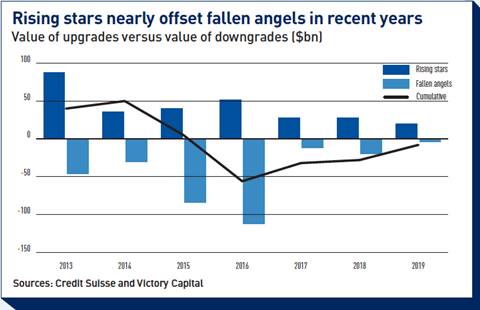 “Approaching the end of the cycle, we look at less leveraged sectors,” says Clayton Triick, senior portfolio manager at Angel Oak Capital Advisors. He highlights banks, especially regional and community names, which are becoming more like utilities as they maintain higher capital cushions against adverse events, but may nevertheless be lower rated than investment-grade firms. He also advocates consumer and housing themes like home building corporate credit and mortgage-servicing bonds. Bonds delever as underlying loans pay off. Triick notes, “if we see higher volatility and a recessionary slowdown, the bonds get less risky”.

Wicker considers government-backed mortgage sectors attractive, with leverage woes of 2008 in the rearview mirror. Still, he is less enthusiastic about collateralised loan obligations, backed by auto loans and credit cards.

Rybinski cautions against pharmaceutical credit, given the political risk of medical insurance reform, and warns that trade uncertainties could affect capital goods. He suggests real estate investment trusts are isolated from trade and election risk. In general, he predicts, the winning formula will be to “separate the wheat from the chaff, and move up in credit quality”.