In the current environment, investors look set to lose money on European government bonds – a quintessential safe-haven asset. The nominal yields on German and Swiss 10-year government bonds are negative, as is the Swiss base rate. Real yields – nominal yield minus inflation – are in negative territory in many other countries, such as the UK. Investors are paying to lend money to governments.

Given current political and economic trends, government bonds will likely become even more insecure, says Thushka Maharaj, global strategist at JPMorgan Asset Management’s Multi-Asset Solutions. Over the next 15 years, they will be less effective as a safe haven because governments are starting to abandon fiscal conservatism. As a result, public debt looks set to increase. At the same time, central banks are moving towards a flexible inflation-targeting framework. Meanwhile, more central banks may begin to peg bond yields, as the Bank of Japan has done.

“Investors need to challenge the concept of a ‘risk-free return,’ as they are now required to pay for the portfolio protection bonds provide,” says a recent report that Maharaj co-authored.

“There are still assets that are relatively resilient in times of heightened volatility, but the resilience is also a function of the current risk-reward and valuation levels – the need to buy low and sell high is still there,” says Marc Franklin, head of flexible multi asset at NN Investment Partners. “For example, three or four years ago, core euro-zone government bonds delivered a healthy positive yield. Now it’s negative. Such assets, therefore, may not be considered quite as safe or low risk as they used to be.”

This scenario does not necessarily exclude government bonds, says Maharaj. However, while she contends that “investors still need to have bonds as ballast”, they “are no longer paid to have protection” through holding them.

Where can investors seek shelter? Within sovereign fixed income, there are still options within shorter-dated government bonds, says Jeroen Blokland, portfolio manager for the Robeco multi asset funds. Here, investors need to look for those bonds that offer a more substantial yield, such as two-year US Treasuries. “Although the cost of hedging for euro investors is about 2%, a downturn would close the yield differential and reduce hedging costs,” he says.

Elsewhere in fixed income, “inflation-linked bonds look interesting,” says Franklin. “While inflation expectations are extremely low, and we don’t expect inflation levels to spike substantially, they could still grind higher in the euro-zone in the coming months.” This, he adds, means that breakevens are mispriced, offering an investment opportunity with linkers, which are undervalued relative to their vanilla equivalents.

“Investors need to augment bonds with other assets,” says Maharaj. “Gold is an attractive option, particularly in very high or low inflationary environments, and does well when bonds are not working as strong hedges.”

Gold also offers diversification within safe-haven assets, although it is highly correlated with linkers, albeit with more volatility, says Franklin.

While Blokland also sees a role for gold, he says it may not deliver as strongly as it did in the financial crisis as its performance was then helped by a weak dollar. This feature may not be replicated. “You need to be careful about extrapolating trends,” he says.

Other options include real assets, which “are cyclical but expected to be less correlated in the next downturn and provide cashflows you’re not getting from bonds”, says Maharaj. Prime examples include real estate and infrastructure, although they are certainly not immune from capital losses.

Maharaj also says there are non-economic factors favouring infrastructure, as while the market is still relatively small, this will expand alongside governments’ fiscal commitments. Government-backed green bonds financing sustainable infrastructure projects are an attractive option. However, she cautions, investors will need to do their due diligence on projects because of potential liquidity problems. 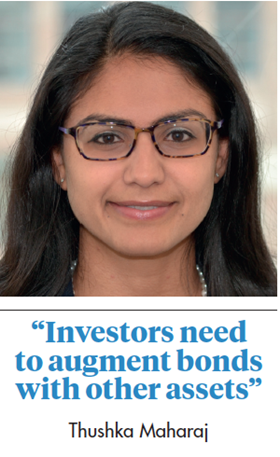 At times of severe market stress, cash remains of substance. Investors do not just have the option of domestic currency, but can decide which currency exposures present the best, safest option.

Maharaj is, however, sceptical of the dollar’s status as a safe-haven currency, arguing “although we’re used to seeing the dollar trade well in risk-off scenarios, there’s no clear empirical evidence that the currency always goes up in periods of stress”.

She adds that JP Morgan Asset Management’s long-term capital markets assumptions show the dollar is now highly valued and on a secular downtrend, and points to the prior strong overseas flows into US assets, which “could reverse in a stress situation as money repatriates to domestic markets”. Instead, she says, “the yen and Swiss franc should reassert their safe-haven characteristics in a US recession”. However, Blokland says that “while the Swiss franc is seen as a strong safe haven, its total share of the FX market is just too small”, which poses a question as investors rush to liquidity.

Nevertheless, there is a fair amount of consensus on the safe-haven status of the yen, “supported by Japanese investors repatriating their investments in the face of global uncertainties”, says Blokland.

Ultimately, as Franklin says, there are still safe assets: “However, this is now no longer an absolute, but rather a relative, category: safer. Such assets are no longer absolutely safe but lower risk versus other assets.”