How we run our money: Joachim Schwind & Andreas Hilka 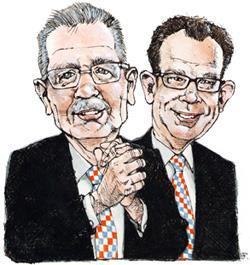 The German parliament recently approved a much-debated reform of the pension system that allows employers to provide pure defined contribution (DC) pension plans. The concept is new in Germany, where pension benefits are guaranteed by employers, at least the nominal value of contributions. The proliferation of pure DC plans, however, depends on the willingness of trade unions and employers’ associations to set up such plans. Only employers that have signed a collective labour contract will be able to offer such arrangements.

It is too early to tell whether the reform will be a success, not least because the changes come into force in January 2018 and practical discussions have barely started. However, pension fund professionals in the country are preparing for a period of intense discussion and reflection on what it means to provide an income for retirement.

Communication with members will be key to the success of the reform, say Joachim Schwind and Andreas Hilka, two veterans of the German and European pension industry. The pair today oversee, as executive members of the same management board, two pension funds with a shared history. The largest of the two, with €8.9bn of assets, is known as Pensionskasse der Mitarbeiter der Hoechst-Gruppe . It was the pension plan for employees of Hoechst, a well-known chemical and pharmaceutical company, whose pharmaceutical operations are now part of Sanofi-Aventis. The institution, which is closed to new members, was founded at the end of the nineteenth century by the forward-looking owners of the firm. It has grown to be one of the largest company-based occupational retirement organisations in Germany.

Almost a century later, in 1998, a separate, multi-employer pension institution was set up using a more DC-oriented concept, known as Höchster Pensionskasse. It takes its name from the large industrial conglomerate, Hoechst, which today includes more than 90 companies, mostly in the chemical and pharmaceutical sectors. The Höchster Pensionskasse has 240,000 members from 500 firms and manages €1.9bn of assets.

The two pension funds are run by the same management team. Schwind leads the pension funds as CEO, whereas Hilka is responsible for asset management in both of the funds. Both have held several notable positions in the country’s pension industry. Schwind is deputy chairman of aba, the Germany pension fund association, and a former member of the European Insurance and Occupational Pensions Authority’s Occupational Pension Stakeholder Group (EIOPA/OPSG). Hilka, former head of pensions at Allianz Global Investors (AGI), chairs aba’s asset management committee.

The pension reform should strengthen second-pillar pensions by expanding coverage of occupational pension benefits, and represents an answer to the challenges of the low-interest-rate environment. However, it adds another layer of complexity to the management of the organisation, starting with communication.

The reform should encourage that shift. As a result of the introduction of pure DC plans, German pension funds will have to become accustomed to using mark-to-market valuation.

As far as the pension funds that Schwind and Hilka run, exposure to government bonds has been cut to nearly zero in recent years. Exposure to bank loans has also been reduced. In turn, the funds have increased the share of alternative assets in the portfolio. Real estate – which is classified as an alternative asset class – takes up 15% of the portfolio of the larger fund and 20% of the smaller fund. “The goal is to bring that to 25% of both funds’ portfolios, which is quite substantial. Overall, we are seeking to achieve 30% exposure to real assets. Our real asset portfolio is already delivering very good, stable earnings,” says Schwind. Many large pension funds in Germany follow a similar strategy focused on real assets, particularly investments in infrastructure.

Directly-held fixed income, which consists mainly of domestic investment-grade credit, takes up almost half of the portfolio. In addition, a sizeable portion is allocated to funds that invest in foreign investment and high-yield credit, mainly US, as well as multi-asset credit. With no mark-to-market requirements, the funds’ liability-management strategy is focused on duration matching and credit risk management fully. 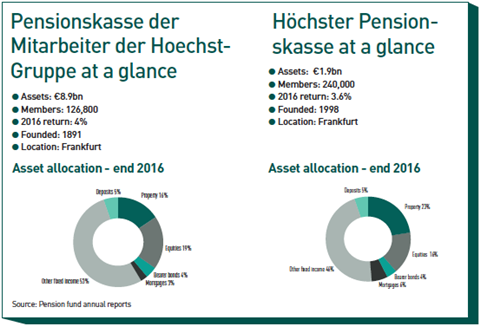 The allocation to equities is low. The reason for this, Schwind says, is the high stress-testing requirements and capital charges that come with the asset class. After all, under German law the funds are regulated like insurance companies. “We choose real estate instead, which gives us a stable return stream and has less stringent requirements. But we are considering investment in equities in the near future. The picture is changing constantly,” says Schwind.

About 80% of assets are managed in-house. A team led by Hilka manages the entire domestic portfolio of investment-grade, fixed-income assets. The pension funds have a large real estate team that manages an exclusively domestic property portfolio. The split between internal and external management of the assets might change slightly, with more involvement of external managers. But the organisation intends to remain firmly in control of the entire asset management process. It will depend partly on how the strategic asset allocation changes over the coming years. If, following the implementation of the pension reform, employers and employees agree to set up a pure DC plan, the strategy is inevitably going to change.

Employing external managers to manage new, riskier asset classes requires careful evaluation of the costs, says Hilka. “There is always a trade-off between the potential returns from a new asset class and the costs associated with it. And in the current low-return environment we have to be extremely cost-conscious. This, too, determines to what extent you hire external managers,” he says.

Such trade-offs are particularly prevalent in private debt, which is an asset class under consideration by the board. “We are assessing whether the opportunity to enter the private debt market is still valid, once the costs of structuring and managing the investments are taken into account. There is certainly a significant question mark as to whether we can really find value in working with external managers in that asset class,” adds Hilka.

The search for yield continues. Hilka says: “Today you need to look for extra returns where you can find them, and it is likely on the credit side. Having invested in listed assets, including high yield, we are digging deeper in the credit markets.”

A potentially significant shift is also occurring in the way the funds deal with environmental, social and governance (ESG) matters. At the moment, the board complies with the domestic requirement to provide a statement on the fund’s approach towards socially-responsible investment. As such, they also meet the requirements of the EU’s Institutions for Occupational Retirement Provision (IORP) directive. However, there is no specific strategy of excluding or engaging with investee companies based on ESG considerations.

This is likely to change, according to Hilka, as it becomes clearer that ESG-related risks affect pension outcomes. “Given our background, and the fact that we have almost 500 sponsor companies from different industries, exclusion lists might not be necessarily the right choice for us. Our idea is to become gradually more cognisant of ESG principles and understand how ESG risks may affect our allocations going forward,” says Hilka.

ESG is indeed becoming increasingly a matter of risk management. The funds’ external managers are likely to be affected first, says Hilka. The pension fund already requires that external asset managers comply with the United Nations’ Principles for Responsible Investments. With regard to the internally-managed investments, the fact that the portfolio is mainly invested in fixed-income assets could make compliance with ESG principles tricky, according to Hilka.

But the greatest challenge in the coming years will be creating and managing an attractive new pension product following this year’s reform. The design of the product will be determined by the results of discussions between members and sponsors, but the direction of travel is clear enough. Schwind says: “We will have to design an attractive product that has as little volatility as possible. It is a catch 22 scenario. Such a product will have to, at the very least – from the perspective of the beneficiaries – secure the contributions paid into the plan.” A lot of emphasis will be on achieving the most efficient strategic asset allocation, considering both returns and costs. An allocation to equity may be part of the answer, and a striking difference to the current shape of the portfolio, adds Schwind.

It is hoped that by introducing pure DC plans the reform will take pressure off sponsors and increase participation in the second-pillar system. What is already obvious to Schwind is that although, in theory, sponsors will be spared a heavy burden, managing pension funds will not become easier. Regulation at domestic and European level has become so onerous that consolidation among  pension funds is extremely likely, according to Schwind.

“You have to adapt your organisation’s processes year by year. You cannot complain about risk management, but it does take a certain governance structure to cope with these new demands,” says the CEO. In this and other areas, the members of the two pension funds that Schwind and Hilka oversee should be satisfied that the board is ready to meet the challenges.