How we run our money: Louvre Endowment Fund 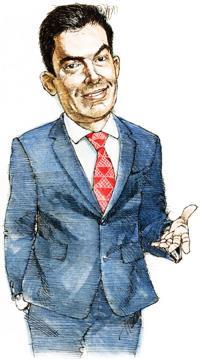 Last year the Louvre was the most visited museum in the world, with more than 8m visitors. Its more than 72,700 square metres of gallery space also makes it one of the largest museums in the world. “Heir to the century of the Enlightenment and the French Revolution”, as its website proudly says, the Louvre hosts one of the world’s finest art collections. It is one of the most powerful symbols of human achievement.

Much has been said about the Louvre and its significance. But few will know that it is also the leading actor in a smaller, but nevertheless important, revolution that is taking place in the French institutional investment sector.

In 2008, French lawmakers introduced endowments, loosely resembling the organisations that already operated in the US. The following year, the museum gave life to the Louvre Endowment Fund, which was the first of its kind in France. Since then, partly with the help of the fund, other iconic cultural organisations in the country have started setting up endowment funds.

Today the fund is the largest capitalised structure in Europe that invests on behalf of a cultural organisation, according to CEO Philippe Gaboriau. He joined the fund four years ago, after working as portfolio manager first for French wealth manager Primonial and then for Barclays.

Gaboriau says that rise of endowment funds in France is a positive development on many levels. “It is very responsible of the cultural operators to develop a long-term saving approach. It is also very positive for the investment landscape in France, as it diversifies the investor base. We mainly have mutuals, savings and pension plans in France, many of which are small and pay-as-you go. Endowment funds are a new type of institutional investor that brings the benefits of having a funded status and a long-term view.”

This is just the beginning, and the Louvre Endowment Fund itself is a minnow at €240m of assets. Other organisations are setting up endowment funds, according to Gaboriau. Among them is the French National Library which, in terms of size, number of employees and budget, is similar to the Louvre, and is one of the largest libraries in the world. The Villa Medici, the French Academy in Rome, is also setting up an endowment fund. Gaboriau says his organisation has recently helped the Cannes Film Festival set up an endowment fund of a significant size.

For individual organisations, the benefits of setting up endowments are clear. Gaboriau explains: “They are easier to manage in terms of governance. We are not required to have a state representative in our board, whereas foundations always have to do so.”

The mission of the Louvre Endowment Fund is to “finance the museum’s long-term investments through aid from individual donors, foundations and corporations”, according to its website.

At its inception, the fund received a large contribution from the United Arab Emirates (UAE), where the Louvre Abu Dhabi has recently began to operate. The project is the outcome of a strong collaboration between the two countries.

The UAE contributes between €50m and €80m every five years, says Gaboriau. The fund also obtains about €3m to €4m per year in gifts and bequests. Responsibility for fundraising lies with Gaboriau, and he spends roughly half of his time on this key task.

To strenghten further its ties to the Arabian Gulf, French president Emmanuel Macron recently dined with Saudi Crown Prince Mohammed bin Salman in the Louvre, during the prince’s much-talked-about visit to France. As part of the visit, it was announced that MiSK, the prince’s foundation, had signed a further partnership agreement with the museum.

Perhaps the most exciting part of Gaboriau’s job is investing the money. The fund has an absolute return target of 5% over a market cycle, and aims to transfer 3% to the Louvre, using the remainder to recapitalise the portfolio to compensate for inflation. All excess revenue, including dividends, coupons and returns, is transferred to the Louvre.

The fund’s long-term objective and funded status means Gaboriau has plenty of freedom in terms of asset allocation. That is why he made some significant changes to the strategy after he joined. “The equity part of the portfolio was almost entirely passive. The exposure was implemented through a passive fund tracking the MSCI World,” he says. Today, the fund invests in equity, fixed income, alternative strategies, as well as real assets. Gaboriau has also built an option overlay to manage risk, which he runs himself. All the work relating to setting the asset allocation, manager selection and implementation is carried out internally. 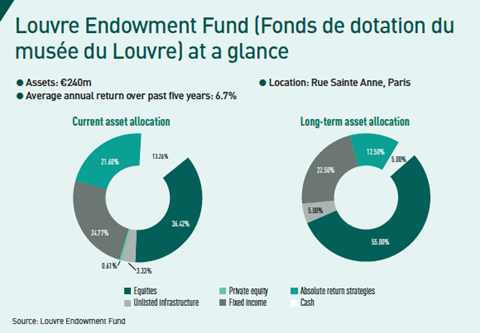 “We manage everything internally and we are quite flexible. The equity allocation could theoretically range from 20% to 75% of the portfolio,” says Gaboriau. As of the end of last year, the fund allocated 48% of the overall portfolio to equities. However, the allocation was reduced significantly earlier this year, and now stands at 35%.

The fixed-income portfolio has also seen some dramatic changes over the past 12 months. Until last summer, the fund had no exposure to traditional fixed income, including sovereigns and investment grade. These assets were sold in 2016.

The portfolio included 12% in high yield, 10% of local currency emerging-market debt and 5% in catastrophe bonds. But last October the fund divested its high-yield holdings, and decided to reinvest partly in defensive euro aggregates, with a flexible approach. As of January, the overall fixed-income portfolio accounted for 27% of assets.

The fund’s portfolio of alternative strategies is Gaboriau’s work. “We implemented that in the summer of 2014, just after I arrived. The idea was to replace, little by little, the traditional fixed income we had, which we didn’t want to add for risk/return concerns. I wanted to avoid having any kind of major directional exposure within that bucket, so it’s purely market neutral. We don’t want major equity beta or exposure to rates and spreads.”

At first, this was achieved through an allocation to equity market neutral and merger arbitrage funds. “The performance has been slightly below what we were expecting. We were expecting an average of 4%, but it has been been slightly above 3%. Very recently, we introduced an euro-denominated commodity trading adviser (CTA) strategy to replace one of the three equity market neutral funds we had, which we sold because the AUM of the fund had become too large. The CTA should return up to 6% net of fees,” explains Gaboriau.

Gaboriau is anticipating big market swings. In February, the fund also sold its options, which consisted in put options on Euro Stoxx and Nasdaq indices and call options on the VIX. However, there is a long-term strategy, which he says probably won’t see great changes until the fund becomes much larger in AUM terms, and this is some way off.

Two choices in particular highlight Gaboriau’s long-term vision. He has set a 10% strategic allocation target to real assets. “We have a bucket for real assets that can include private equity, real estate, commodities and infrastructure. For risk-reward reasons, at the moment we focus on a number of infrastructure funds. We have committed 10% of the portfolio, but only 4% has been called so far.” Gaboriau expects to fill the gap, adding more infrastructure and private equity investments in the medium term.

It was also Gaboriau’s idea to build a socially responsible investment (SRI) strategy. He recounts: “I thought it was important to show a commitment to SRI, given my fundraising responsibility. We decided against a best-in-class approach, and instead implemented an exclusion approach that focuses on a controversial sectors, particularly weapons.

“We also implemented our SRI approach through impact investing. My feeling was that impact investing made much more sense for our donors than a traditional best-in-class approach. We didn’t want to focus on climate change and the environment because that is outside the scope of the Louvre’s mission. We felt that it was more meaningful to operate in line with the Louvre’s mission, which relates to art, education and heritage.”

The impact-investing strategy consists of two positions. One is to support education in France. “It’s an investment on helping young students to keep on track at school,” explains Gaboriau. The other investment focuses on small French companies operating in the crafts sector.

Gaboriau does not use investment consultants. He explains: “I think it’s often better to do the job yourself, in order to really understand how the sector or the strategy works. It can take time. For instance, it took us eight months in total to process our research on the infrastructure sector, but at least I am very confident of the investments I chose. I can explain why I love them, whereas consultants are not investing their money, only providing advice, so their commitment is not as strong as our commitment to deliver performance.”

Instead of relying on external advice, Gaboriau has a small team helping him with investment and fundraising matters. He is also challenged and advised by a non-executive investment committee. He says: “They advise the board of directors of the fund, and challenge my decisions, since I am the only person responsible for investment. It’s, of course, very useful to be challenged on what I do.” The board of directors give Gaboriau the long-term targets and objectives, validate the budget and the amount of money that is transferred to the Louvre every year.

Due to budget constraints, the investment team is probably not going to grow in the near future. “It would make sense to expand the team, but at the moment, if I had the opportunity to hire someone, it would probably be on the fundraising side,” he says.

Despite the small size of the team, Gaboriau seems on top of things. At only 36, he is in a good place, managing a new, growing fund associated with the best-known museum in the world. The only downside of his job is that he has had to move out of his office that was in the Louvre building.

“We used to have two offices in the building facing the river, which was very nice. They were both the size of an apartment. Now I am in a modern building in Rue Sainte Anne, near the Paris Opera,” he says. It’s still a five minute walk from the Louvre, perhaps he now appreciates his proximity to the best art in the world even more.

The Louvre has seen huge growth since its official inception in the 18th century. The hope from an investment perspective is that the Louvre Endowment Fund and its peers can in some way catch up with the magnitude of the institutions for which they invest.