How we run our money: The Kingfisher Pension Scheme 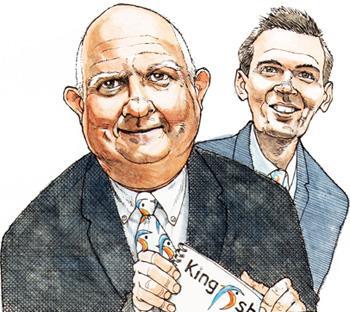 Barely a month goes by without an alarming announcement about the defined benefit (DB) pension deficits of UK companies. In December last year, the Purple Book, an assessment of the risk profile of UK DB schemes, valued the combined deficit of UK DB schemes at £244bn (€340bn) as of end March 2015. This is the highest level since the UK Pension Protection Fund was established. Funding was 84% compared to a high of 120% in 2007.

The result, says the consultancy, is increasing cash-flow risk for corporates, further DB closures and more resources spent to improve defined contribution (DC) pension schemes. But in the DB world, there will be increasing pressure on trustees and sponsors. They need to find asset allocation solutions that can ensure pension payments are met without rescource to the sponsor.

Kingfisher, a large retailing group listed on the FTSE100 index, is one of those large corporates working to address that pension conundrum. The company has been working across both DB and DC to safeguard its current and future pensioners’ income, making sure pension risk does not impair shareholder value at the same time.

Kingfisher, which owns leading brands such as B&Q in the UK and Brico Dépôt in France, recorded revenues of £11bn during the latest full-year reporting period to March 2015.

The company began addressing its pension deficit over 10 years ago, with an explicit de-risking programme that continues today. In summer 2012, the DB scheme was closed to new members, and more recently the Kingfisher Pension Fund’s trustees improved the DC scheme to keep up with regulatory changes to the DC framework in the UK.

Dermot Courtier, Kingfisher’s head of group pensions, recounts that the de-risking journey began in 2004, when the trustees and sponsor agreed on a special deficit payment of £250m into the scheme.

The sum was injected into the pension fund to implement a liability-driven investment (LDI) strategy. Courtier, a former director of pension strategy at Royal Mail, says: “From 2004 onwards, we’ve been de-risking the scheme at the highest level, moving out equities into risk-free assets on a LDI basis.” At the moment, about 80% of the DB scheme is invested in matching assets.

The statutory funding objective simply consists of making sure the fund has enough assets to cover its liabilities. The 2FO, explains Courtier, is a more specific objective that consists of reaching full funding status, on a Gilts basis, by 2030.

“It’s very important for us to have that defined timeframe,” Fuller says. “It helps to shape some of the decisions, including what the employer might need to pay into the scheme over that timeframe. This way we can try to keep the demands on the employer as consistent as possible.” 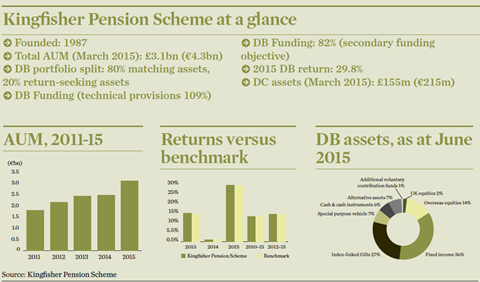 Everything is geared to that objective. For instance, scheme has set up a special purpose vehicle (SPV) to invest in property assets as part of the return-seeking portfolio. The vehicle will be closed in 2030.

That objective was set in agreement with the sponsor. Courtier and Fuller concur that the trustees have a “collaborative approach” with the sponsor and are involved in a regular dialogue. Fuller adds: “We consult with the employer on the investment strategy just to make sure that they are comfortable in terms of the risk-reward trade off of our choices.”

Although the scheme has set this clear target, Courtier concedes that the trustee’s reviews of the DB strategy have intensified over the past two years. “Overall, hedging has become far more complex over the past years, and more regular reviewing is needed,” adds Courtier.

After the 2013 valuation, which was signed off in March 2014, the scheme took another fundamental step. The trustees moved from a passive to an active LDI strategy and awarded absolute return and multi-asset credit mandates for the return-seeking part of the portfolio. This had a positive impact on scheme funding, which is currently over 82% funded on a 2FO buy-out basis.

Regular monitoring of the DB scheme’s funding level also ensures that trustees can take every opportunity to lock-in funding gains. They have set up a process consisting of dynamic de-risking triggers that allows them to do so. Following this process, both in 2014 and 2015, assets were transferred from the return-seeking portfolio to the matching portfolio, in two tranches of £100m and £50m, respectively.

Along with the LDI and hedging programme, the fund has focused on diversification. “We initially had some concerns on the return-seeking side, as we were still quite reliant on the equity premium,” says Courtier.

In search for equity-like returns with reduced concentration risk and equity risk, the fund has added a number of new asset classes. It has invested in a passive emerging market equity portfolio, an emerging market currency portfolio and a global agriculture fund.

In addition, the trustees have entered the alternative space. It has invested in a direct lending fund and has appointed LGT Capital Partners, the asset management arm of the Liechtenstein-based banking group, to run a broad alternative asset portfolio.

There was a carefully considered decision not to invest in infrastructure. “The feeling was infrastructure would not necessarily be liquid enough for us. Tying up our money for 10-15 years would not be a very sensible solution in the context of our 2030 target, as the progress needs to be re-assessed every three years.”

It has been an eventful few years for any pension fund in the UK, as lawmakers have begun to address the country’s severe lack of private pension savings. With the introduction of automatic enrolment in October 2012, and the government’s pensions freedom agenda, funds have had to adapt.

For large corporates with a legacy DB scheme, this means more responsibility for the trustees. Many have had to launch new DC programmes or review their current ones.

The closure of Kingfisher’s DB scheme in summer 2012 more or less coincided with the launch of automatic enrolment in the UK. Then it was a question of improving the DC investment strategy.

But first, the Kingfisher Pension Fund’s trustees saw fit to implement an explicit financial education programme for DC members, scheduled to run for five years starting from November 2013. Trustees oversee the educational material and the delivery of the programme. This includes ‘gamification’ – elements of game design used for educational purposes. Courtier says this was well received by members, particularly younger ones. “The feedback we got through focus groups and online was very favourable. They welcomed the opportunity. They found it a very fun way to engage. For us, it was a good way to encourage people to save for their pensions.”

As the trustees were running the financial education programme in April 2014, the UK government introduced pension freedoms. This was a momentous and somewhat unexpected change in the UK pension landscape. It means, among other things, that retirees no longer have the obligation to purchase an annuity at retirement.

Courtier says the introduction of pension freedoms led trustees to tweak the education programme, to make it align with the new regulation. But it also led the trustees to re-think and improve the DC investment strategy. “We carried out internal joint trustee and company reviews, as to how freedom and choice regulations would fit into what were doing,” said Courtier.

At the time, the trustees had already introduced a new investment target for the DC scheme, based on an in-depth analysis of member outcomes. The scheme had decided that a reasonable target for retirement income would be two-thirds of their final salary, including state pension.

Courtier points out that, according to the trustees, the state pension will be an important portion of members’ income in retirement, given that they are relatively low earners. To achieve that outcome, the trustees set an investment target of consumer price inflation plus 3%.

This was the basis on which the DC scheme was improved, starting from the re-design of the default fund. Courtier says: “We carried out our member analysis and review, and recognised that DC is very much still in its infancy here in the UK. The majority of our membership over the next few years would be retiring to small pots. The trustees therefore decided to amend their default strategy.”

The default strategy consists of a five-year cash fund, replacing the previous 10-year lifestyle fund – although the 10-year lifestyle option is still available to members. Those who choose that route have 25% of their pension pot invested in cash and the rest in Gilts to back an annuity.

But the five-year cash solution, according to Courtier, is the most appropriate for current members. “There are other options, but having segmented the membership, we’ve gone with a new default arrangement that meets the majority of our membership’s expectations and aspirations.”

Courtier adds that the 10-year lifestyle solution lends itself to members who favour income drawdown. The choice of self-select funds on offer has been widened in recent years. Two important additions to that portfolio were a property fund and an emerging market fund.

Courtier explains that the trustees believed widening the choice of funds was as important as reviewing and monitoring the existing ones. However, only a minority of members are likely to choose the 10-year lifestyle and income drawdown solution. Evidence shows that most auto-enrolled members passively chose the default fund.

This is why Kingfisher’s trustees have put a great deal of effort in creating a default solution that is tailored to the majority of members. Courtier points out that the default fund was also explicitly linked to the new UK state retirement age.

“According to our analysis, most people indicated they had a preferred retirement date of 55,” says Courtier. That is when, according to the pensions freedom rules, workers can access their pension pots, paying tax equivalent to their marginal rate on the sum.

“But when you look at it in reality, with the new state retirement age coming in, most people are going to retire on a state pension between the ages of 66 to 68,” adds Courtier. “So we thought it would be important to align the five-year default fund to that grouping and to that new state pension arrangement.”

The membership structure is also clearly evolving, and the scheme will have to adapt. The added challenge for the Kingfisher Pension Scheme is dealing with longevity risk.

Although the DB scheme is closed, that risk remains and can harm the scheme in ways that it is difficult to predict. As yet, however, there is no firm decision on whether the fund will engage in a longevity-hedging transaction, such as a buy-in or a longevity swap. Courtier suggests a potential buy-in would take further improvements from a systems and administration point of view.

“It’s effectively an unrewarded risk,” says Fuller. “The trustees are discussing whether they are comfortable living with it, or do they want to address it sooner rather than later. But we don’t look at things in isolation. We have to understand how it’s going to impact the other risks and make sure we come up with the right answers.”

Clearly, the right answer is different for everyone. But it should be possible to reduce all answers to a simple equation, which the Kingfisher trustees seem to be applying successfully. This consists of focusing on controllable risks and increasing choice for members, while providing strong guidance and sound financial education.