How we run our money: USS 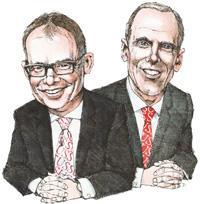 The debate over the correct valuation and management of defined benefit (DB) pension plans might not be as violent as many theological disputes but some would argue that it has generated its own trail of devastation.

Jon Exley, Shyam Mehta and Andrew Smith initiated the strife with a paper presented to the UK’s Institute of Actuaries in 1997. The authors argued that pension liabilities are akin to bond-like cash flows on a company’s balance sheet and should be valued as such and managed appropriately. The paper overturned the previously accepted methodologies of the actuarial profession and replaced it with a new orthodoxy.

The accounting profession has interpreted it as meaning that liabilities should be valued on the basis of corporate bond yields enabling a comparison to be made with mark-to-market asset values. That is the basis for calculations of scheme deficits and surpluses. But, say many, the theoretical case for these rates is defective.

Tim Wilkinson and Frank Curtiss, former executives at RPMI Railpen, make the opposing case in an article published in Professional Pensions in May 2018. In their view, using such discount rates “has wrecked company balance sheets, caused the misallocation of billions of pounds of corporate resources to plug illusory deficits, distorted scheme investment strategies, and played a major part in the collapse of private DB provision”. The best tool for monitoring a pension scheme, they argue, is a cash flow forecast.

The two sides of the debate have fundamentally different philosophical frameworks for defining the valuation and hence the management of defined benefit pension schemes. No amount of debate is likely to create a consensus.

Today, the front line of the debate lies perhaps where the arguments should be the most cogent – in the academic sphere with the £63.6bn (€71bn) Universities Superannuation Scheme, the largest pension fund in the UK. USS Ltd is the corporate trustee responsible for the management and administration of the pensions of academics in the UK’s universities. Its reported deficit increased in the period from its 2014 valuation to its 2017 valuation, despite an increase in the value of its assets, because discount rates fell at a faster rate than assets over the period. The 2017 valuation suggested that, on a prudent valuation basis, the scheme had a funding deficit of £7.5bn (89% funded). That, says USS, means the current combined contribution rate of 26% of payroll (8% employee; 18% employer) would need to rise by at least 11% of pay to maintain the current level of benefits. The publication of this reasoning caused uproar among academics amid much criticism of the methodology.

USS’s own approach to valuation, however, lies in the middle of the two extreme views of pure bond-based valuations versus discounting at the rate of forecasted asset returns, says CEO Bill Galvin. He says that on its best estimate – based on its approach to risk and the associated investment strategy – there would indeed be a surplus. But he adds, “by definition, this only has a 50/50 chance of our funding assumptions being right (or better). To run the scheme responsibly and be compliant with legislation, we have to apply a degree of prudence and, as a result, we have a funding deficit.”

So where lies the truth and what are the options not only for the USS but for the government given the critical role of the higher education sector?

Valuing liabilities solely on the market prices of long-dated AA corporate bonds (the formal ‘FRS102’ accounting basis) gives an even higher theoretical reported deficit of £17.5bn. But, says Guy Coughlan, chief risk officer, this is not the measure on which the trustee and its stakeholders base decisions on the level of contribution required to fund benefits provided by the scheme or on the scheme’s benefit structure. Nor could it be, despite the arguments of the most extreme proponents of bond-based discount rates, as there are not currently sufficient long-dated AA corporate bonds available in the market for this measure to become reality. Instead, the scheme’s funding plan uses a prudent expected rate of return for the scheme’s actual assets to place a present value on the liabilities to determine the future contribution requirements.

The scheme’s assets are currently invested in a diversified portfolio – broadly 60% equity-like, 40% bond-like – that is consistent with the scheme’s risk budget agreed in consultation with employers, says Coughlan.

The degree of risk USS should take in its investment strategy is therefore a critical question when determining what should be future contribution rates to meet future pension outflows. But DB pension schemes do not exist in isolation, and they are ultimately backed by the employer on whose behalf the scheme is run.

The strength of the sponsor covenant is therefore the crucial determinant of how much risk the scheme can afford to take, since in the event of any future shortfall, the sponsor has the responsibility to cover it. The sponsor of USS, however, is unusual in that it is not a traditional corporate but, instead, is a mutual scheme covering over 350 separate higher educational institutions.

Given that these institutions themselves are, in effect, publicly owned and liabilities are mutualised based on a ‘last man standing’ concept, it is not surprising that USS has the highest possible covenant rating. Despite this, the ability and the willingness of sponsors to increase contributions is limited. USS’s own discussions have led it to conclude that most employers could afford an increase from the current 18% of pensionable salary to 21% and many would also be afford up to 25%. This would, however, require changes to business plans and come at a time when many institutions are trying to increase investment and offset falling grant funding. So even if institutions may be able to afford to increase contributions, they might not be willing to do so.

If USS has such a strong covenant, the question that is asked of it is why it cannot take on more risk, particularly since it is cash flow positive, with current contribution inflows (marginally) greater than pension outflows. USS argues that the existence of positive cash flows alone is not, however, sufficient as they can still be consistent with a continuing build-up of risk beyond what institutions are able to cope with. There is no guarantee that downturns will be reversed in the long term. This is an important point, since some would argue that, given enough time, downturns do reverse, so the question is whether cash flows are sustainable rather than valuations bouncing back.

This harks back to the original rationale that the head of the UK’s Imperial Tobacco Pension fund, George Ross Goobey, made in the 1950s, behind his decision to switch the entire fund into equities on the grounds that they were a better match for long-term pensions than bonds. “Our attention need not be focused on the capital side –  that is to say, the day to day market value of the capital – but can be concentrated on the income, and our chief concern is to ensure that the average annual income is sufficient to produce a yield calculated on the purchase price equal to or greater than the rate assumed by the Actuary in his calculations,” Ross Goobey said in 1955.

USS is sympathetic to Ross Goobey’s views but it is also subject to a regulatory framework based on a bond-discounting methodology that constrains the amount of risk the fund is able to make. Given its agreed asset allocation, which is currently predominantly in risk assets likely to generate significantly higher returns than bonds, USS calculates a forecasted return rate. It then subtracts a margin of prudence to this rate to generate the eventual discount rate that is used to calculate the present value of liability cashflows.

The figure chosen, Coughlan says, is obtained using the concept of broadly a two-thirds confidence level or “chance of success”. This means that there is still broadly a one-third probability that average returns will be lower than the prudent assumption and there is a significant chance that they could be substantially lower.

The discussion on the potential size of a deficit can therefore be seen to revolve around what are acceptable estimates for asset returns, and how much they should be adjusted for the sake of prudence. On the USS’s current best estimates, which implies a 50/50 chance it is correct or better, Galvin admits the scheme has a funding surplus. However, once it builds in an element of prudence, the scheme ends up with a deficit. As a result, there has to be a plan to eliminate that deficit over a number of years and also to reduce risk by shifting greater proportion of assets into bonds and away from risky return-seeking assets, says Coughlan.

The controversy that exists is whether these calculations are reasonable. USS Ltd has the responsibility merely to set the required contribution rate needed to maintain benefits and it is then up to employer and member representatives, sitting on a joint negotiating committee, to decide whether benefits and/or contribution rates need to change. Following on from the strikes earlier this year by university staff, it was agreed that a separate joint expert panel (JEP) would be set up to review the 2017 valuation.

What is the scope for the JEP in terms of arriving at a different valuation of a possible deficit? The forecasted returns that USS uses are based on a several assumptions and scenarios relating to possible upward moves of interest rates and bond yields, and mean reversion of equity market valuations are debatable. As a result, the eventual conclusions are likely to be a function of the existing views of the panel members relating to likely future economic scenarios.

The problem that USS faces, says Galvin, is that it is difficult to argue against the fact that providing guaranteed annuities has become more expensive.

One option is for the employers to put more money into the pension scheme at the cost of less investment or redefined priorities and lower staff numbers. It could allow USS to take more risk than previously suggested, or the benefits could be reduced; or a combination of all three. The conclusions that the employers reached, says Galvin, were that they were not able to contribute more than 18%; they did not want to take any more risks than already outlined by USS; and the unions have indicated that they do not want benefits reduced.