1
India: All to play for

The signs suggest India is poised for dramatic improvements in its economy, writes Joseph Mariathasan. But there are challenges around job-creation, education and manufacturing

India is on the cusp of dramatic structural improvements to its economy against a backdrop of a favourable economic environment with a pragmatic and pro-business central government in power.

“India stands out a mile from the rest of the emerging markets,” says Jonathan Schiessl, chief investment officer and India portfolio manager at Ashburton Investments.

And Subbu Subramaniam, CEO of MCap Fund Advisors, says: “After many years we finally have a prime minister who is a patriot before being a politician.”

Not everyone might agree with Subramaniam; there are still lingering doubts about the involvement of the prime minster, Narendra Modi, in the 2002 anti-Muslim riots in the state of Gujarat, although Subramaniam argues that there is no proof of any involvement by him.

But it looks clear that India stands poised for what could be dramatic improvements in its economy that can to some extent be attributed to Modi’s policies – in particular, the passing of the Goods and Services Tax (GST) bill, the passing of bankruptcy legislation and the implementation of a technology–led strategy for tackling rural poverty. The most critical challenge for India, though, is creating enough new jobs for its rapidly growing workforce.

Modi’s government is fortunate that it is trying to implement structural changes to the economy against a backdrop of low oil prices, low commodity prices, stable exchange rates and even good monsoons. As Subramaniam argues, India has saved a lot of money from lower oil prices, which the government has used to spend on infrastructure, with roads and power getting a lot of attention and capital. GDP growth is around 7.4-7.6% with the government aiming for 8% plus.

The hard work that the Reserve Bank of India (RBI) has undertaken over the past two years to control inflation has paid off. Inflation is now running at 4.3% and trending lower, which means that as core inflation has abated, it has given some scope for interest rate cuts. Praveen Jagwani, CEO of UTI International, sees a 25bps rate cut in February next year, followed by another cut in April. 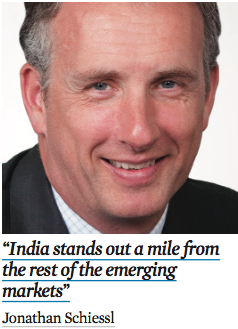 India’s growth rate is comparable to China’s, but it still lags far behind in many respects, most notably in the state of its infrastructure. Modi came into power in May 2014 on a wave of optimism and hope that his administration would finally produce the changes required to transform the Indian economy.

More than two years later, there have certainly been changes, although these have been accompanied by much hype. But as Subramaniam points out, one key problem for the international community is that the Modi government started off with a lot of promise but has not been able to deliver. This is clearest in the still-slow privatisation of inefficient state-owned enterprises, labour reforms, administrative reforms and budgeting.

As Subramaniam adds, the fact that it managed to get consensus on the Goods and Services Tax (GST) bill which was passed by the Upper House of the Indian parliament in August, has improved perceptions a lot. Early indications of the actual rate of GST are about 18% across most sectors, say Ashburton. This will result in lower prices for many goods, as federal taxes can be close to 30%, resulting in savings of about 12% for consumers.

The importance of implementing GST will be profound, says G Pradeepkumar, CEO of Union Asset Management. “GST is important not just for taxation receipts. It also puts a squeeze on the underground parallel economy.” GST is charged on the net value added as with value-added tax elsewhere. Intermediaries charge GST on their sales and can reclaim it from their purchases.

To be able to reclaim GST on purchases they need to register and would then have to pay tax on their sales. This makes it more difficult to deal in cash with more transactions coming into the mainstream tax net, which will lead to both the tax take improving and the level of corruption decreasing significantly.

The passing of the bankruptcy legislation is a critical step because it essentially allows the clean-up of the banking sector, says Jagwani. For corporates to start borrowing again, the banks need to be able to lend and if they do not have sufficient capital they will be hesitant to do so. Cleaning up bank balance sheets means bad debts are either written off, or else banks recover what they can. Creditors can apply to the courts and within 270 days dispose of whatever assets are hypothecated to them, without getting into prolonged legal battles that have, in the past, lasted for years.

Indian business tycoons, most notably Vijay Mallya, have been notorious for taking on bank debt that had little chance of being repaid. Strengthening India’s financial systems is important also because, as Subramaniam points out, in an emerging country such as India, the financial sector grows at 2.5-3 times the rate of GDP growth. “There are a lot of opportunities in restructuring businesses,” he says. “One example is a Russian oil company that is investing $10bn (€9bn) into buying an Essar oil refinery. That will directly benefit the banking sector, as Essar can retire around 50% of their debt.”

About 50-55% of the population works in the informal sector. Rural poverty is endemic, so the federal government has provided a guaranteed 100 days of unskilled work or 100 rupees (€1.4) a day for its rural labour force and has also, in the past, given food subsides in the form of set amounts for such staples as rice, wheat and kerosene. Since both money and goods have to be sent to individual rural recipients, there has, not surprisingly, been huge amounts of leakage through corruption at every level.

The challenge for the government is threefold: it must first be able to identify beneficiaries; it has to then transfer money to them; and, finally, the beneficiaries must be able to easily access their money.

Perhaps the most dramatic structural change to India’s economy and the lives of the poor is arising through the spread of ‘JAM’ (Jan Dhan, Aadhaar and Mobile). The Jan Dhan programme is designed to ensure that everyone in the whole working population has a bank account. The Aadhaar programme has created unique identification numbers for the whole population based on using fingerprints and iris scans for identification. The mobile phone system is India ubiquitous and hence can be used by the rural population to access their bank accounts.

JAM refers to the combination of these three elements, enabling the federal government to directly pass on subsidies to the bank accounts of the population. This direct transfer saves huge amounts that would otherwise be lost through leakages in the system and also increases the purchasing power of the rural population. They can now make their own choices on consumption, rather than receiving physical goods.

A key challenge for the government remains job creation. As Abhilash Lal, the chief operating officer of MCap points out, a lot of the growth has been among the jobless. “There are 23m people entering the workforce every year and there are not 23m jobs being created,” he says.

Many see the development of the manufacturing sector as the long-term solution to this problem. Pradeepkumar says India had never made the right investment to stimulate manufacturing in the past. It has been ignored for some time in India in contrast to China. “In the second half of the 1990s, there was the IT boom. It gave a boost to the economy and the service sector took prominence. Manufacturing was long-term and capital-intensive whereas IT had low capital requirements and results happen quickly,” he says. He goes on to argue that manufacturing needs to be government-led. “There are heavy constraints. There needs to be the right atmosphere for it to happen,” he says.

The Modi government has started the process with the Make in India campaign, an initiative to encourage manufacturing. The objective, Pradeepkumar says, is to increase manufacturing from just 15% of the GDP to 25%: “India is not going to be happy to just import foreign goods and sell them to the domestic market. It is very keen to add value locally. It requires a whole ecosystem for manufacturing to be created.”

This starts right at the bottom with the Start up India campaign, launched in August 2015, to promote bank financing for entrepreneurs. But changes may be required even in education, says MCap’s Lal. “The system has not changed since Lord MacCauley in the British Raj,” he says. “As a result, new graduates have no skills useful for the job market. If I throw a stone out of the window, I can hit five engineers but I can’t get a plumber or an electrician.”

Modi has been canny in the idea of moving manufacturing to India away from China where wage rates are getting too high, says Lal. But as he also adds, India faces competition from other Asian countries such as Indonesia, the Philippines and Vietnam. If India is not to become a dystopian society, with an affluent middle class of 150m supporting a billion in poverty,  it will need to try to stimulate its manufacturing base.