• The pension reform programme introduced by Elsa Fornero saved Italy from financial disaster.
• Italy spends more than any other European country on pensions apart from Greece
• Although the country is financially secure it needs to generate growth to ensure economic and social stability.
• A recent ruling by the constitutional court blocked part of Fornero’s package, with repercussions for the country’s budget.

There cannot be many cases of a government minister bursting into tears when announcing a pension reform programme. But that is what Elsa Fornero did in 2011 when she was Italy’s labour minister. She explained to Italians that exceptional sacrifices were required owing to the country’s financial plight.

Fornero’s sobbing was dismissed as a means to gain sympathy. However, it should not be forgotten that she introduced her reform programme to stave off financial collapse.

Today, Italy spends more than 16% of GDP on public pensions, the highest figure in Europe after Greece. But, thanks to Fornero’s reform programme, the public pension system is seen as sustainable, as are the country’s finances – at least as long as GDP increases.

The reform programme, introduced under Mario Monti’s technocratic government, was a central part of the country’s effort to convince investors of its creditworthiness. In November 2011, just before Monti was appointed prime minister, Italy was borrowing for 10 years at about 7.5%. That was well over 500 basis points higher than the 10-year German bund.

At the time, pension reform was an urgent task, considering the size of the cuts needed and the limited room for fiscal manoeuvre. But what made it challenging was the short timeframe available before the country became insolvent. Fornero responded, signing the law 20 days after her appointment as minister.

Even though it helped the country avoid collapse, Fornero’s name will be associated by the next few generations of Italians with one of the most unpopular political reforms in Italian history. 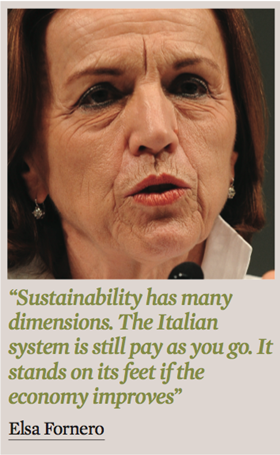 An economics professor and recognised pensions expert, she had little time to decide whether to accept Monti’s request to reform the pension system. Prior to the reform, Italian workers were paying into an unfunded pay-as-you-go system (PAYG), where there was little correlation between contributions and benefits paid. Fornero says the pension system acted as a social security cushion by making it easier for companies to make relatively young employees redundant.

Following the reform, Italy switched to a notional defined contribution (NDC) system. The PAYG arrangement loosely resembles a DC plan as workers’ contributions are paid into notional accounts. Benefits are based on those contributions, taking into account  earnings growth, GDP growth and life expectancy at retirement.

Fornero also introduced special solidarity contributions on high pensions and raised the retirement age for both sexes, with some variations depending on industry. In 2015, workers can retire at 66 years and three months of age (provided they have contributed for 20 years). Alternatively men can retire after 42 years and six months of contributions, while women have to contribute for 41 years and six months. These numbers, however, will change with life expectancy.

The former minister notes how NDC became associated with Sweden’s 1996 pension reform, but it was initially introduced in Italy by Lamberto Dini’s government in 1995. But that government had decided that, although NDC was part of the regulatory framework, its implementation could be delayed. Fornero’s reform simply brought forward the introduction, hopefully generating about €80bn of savings between 2012 and 2021. She says those savings were needed to contain an increase in pension expenditure that was forecast to take place in 2030, when it would increase to more than 20% of GDP.

Clearly, in 2011 the focus was not only on long-term spending patterns. Fornero recalls the government was in danger of being unable to pay public salaries and contractors unless it made immediate savings. To do that, Fornero had to freeze the indexation of all pensions, except the lowest ones, for two years. This was introduced as a temporary measure, one that was not strictly part of the reform, but nevertheless necessary. That, along with the higher retirement age requirement, is among the reasons she is unpopular with Italians. Under such circumstances it is not surprising that she has since shunned publicity.

The reform has also been criticised for forcing many older workers into the difficult position of neither working nor earning a pension. Fornero was accused of lying about the number of such cases that the reform would generate. These people, called esodati, had agreed to stop working at the time of the reform, but they cannot earn a pension under the new retirement age and contribution age rules. Fornero had initially accounted for 65,000 cases, but the number was later revealed as more than 300,000. The controversy, which accelerated the fall of Monti’s government, still divides Italian politics. Because of the large difference between the initial estimate and the final figure, the government has limited funding to compensate the esodati.

Under Boeri’s leadership, the €21bn institution is looking for ways to repair its balance sheet, but has introduced an innovation that is bound to change how Italians think of retirement. Starting this year, Italian workers can obtain, via the INPS website, a reliable estimate of their pension benefit with the Italian equivalent of Sweden’s ‘orange envelope’. But the plan was pushed back several times because of fear that it would have send an alarming message to Italian workers in an already unstable employment situation.

Thanks to this initiative, Italians are starting to realise how low their state pension benefit will be and how hard they will have to work to secure it. Policymakers hopes that this will influence workers’ behaviour, driving them towards second-pillar pension saving.

Fornero identifies a lack of collaborative spirit within the country’s institutions. “Without wanting to throw accusations around, one must question the willingness to co-operate with the ministry on part of Istituto Nazionale della Previdenza Sociale (INPS), the public pension fund,” she notes. “During the reform, when we were discussing measures to safeguard esodati, the number we were given was initially around 55,000. After a few months, however, INPS published a table showing around 340,000 cases. That table, which was circulated among the media, accounted for all the people who potentially needed safeguards, some of which may have still been in a position to contribute to the sacrifices the country was making.” She suggests that data reached the media and her ministry at the same time.

Fornero adds that the case of esodati is symbolic of the cynicism within Italian politics. “In the beginning, our government had support from civil society. But we represented a technocratic government and did not have a party platform to explain the reform, particularly the sacrifices. After that episode, the issue was overwhelmed by controversy, and we could not begin a sensible discussion about it”, she says.

Earlier this year, the Italian constitutional court struck another blow to Fornero’s reforms, ruling in favour of an appeal against the freeze on indexation. The ruling was based on the principle of an acquired right to a pension.

Fornero’s detractors saw this as a success, but it means the Italian government has to allocate additional funding to make up for the missing indexation, putting the budget under strain. The cost is estimated at €500m this year alone.

Fornero says she was amazed by the court’s decision. “Does that ruling uphold the values of justice and equity that our constitution sanctions?” she asks.

The former minister points out on other occasions, such as under the government of Romano Prodi from 2006-08, public pension indexation had been blocked to respond to a similar, but less serious emergency, and that the only difference with her initiative was the scope of the suspension. Fornero notes how the court was split, with six judges on each side of the argument, and the chair of the court had to step in. She describes the situation as “a discomforting sign of the lack of unity in our country”, particularly given that the appeal came from Federmanager, a trade union representing company managers, a category that enjoys high pension benefits.

Despite the additional costs generated by the adverse ruling, Fornero says the public pension system is sustainable. However, she makes a distinction between financial sustainability on one side, and economic and social sustainability on the other. She says: “Sustainability has many dimensions. The Italian system is still pay-as-you-go. It stands on its feet if the economy improves. Aside from the technical fact that negative growth has an impact on the co-efficients, having moved to a contribution method, we have to recognise that pensions fully depend on labour. From now on, every effort in economic policy should be directed towards creating work opportunities.”

This is particularly relevant given the discussion that is taking place. Economist Tito Boeri, the new chairman of INPS, is working simultaneously on fixing the balance sheet and increasing flexibility in retirement.

Fornero warns that focusing on flexibility can have adverse effects if the focus on inter-generational equity is lost. She says: “I have always been in favour of flexibility, which we introduced by making a distinction between different work activities. But we need to make sure that any further flexibility in the system is equitable, as the burden on future generations is already too high. At the same time, we need to be transparent as regards the benefit reduction for people who retire earlier.”

Another radical proposal by Boeri is to move every pension benefit, including those already in payment, to a contribution method of calculation. But Fornero reminds us of a striking fact: the pre-reform Italian system was designed so badly that a large number of pensions benefits worth €1,500 in gross monthly payments have not been paid for in contributions. It is also notable that 65% of the 18m pensions paid by INPS do not exceed €750 per month. This suggests that while there are many pensioners earning generous benefits, the average pensioner does not enjoy a high standard of living.

However, the link between contributions and benefits has been restored. In the future, younger generations are no longer going to be wasting their future pension money. Fornero says that what draws more attention when presenting her reform work around the world is the focus on inter-generational equity.

Time will heal the psychological wounds opened by the reform and the real ones created by the previous system. The former minister says: “The key change is that from January 2012, all pensions are linked to contributions. This requires a change of mindset in Italy, one that must occur sooner rather than later. Workers should realise that the more they save, the larger their pension will be. Pensions should not depend on the generosity of politicians.” Unfortunately, Fornero might be remembered for such candid statements rather than the long-term benefits of her work.