Interview: Rolling back the barriers

Liam Kennedy discusses the role of research in institutional investment with Noël Amenc , who stepped down as director of the EDHEC-Risk Institute earlier this year

Relatively few academic institutions specialise in investment risk management. One of them is EDHEC-Risk Institute (ERI), founded in 2001 and located in Nice, and an offshoot of the EDHEC Business School. Both theory and practice have evolved almost immeasurably in the 14 years of ERI’s existence, at the height of the equity market downturn that marked the end of the dotcom bubble.

Those years have seen a confluence of events that have rather pushed investors towards better risk management and asset-liability management (ALM) techniques. Aside from the equity market downturn of 2000-03, which brought a long bull market to a close and shattered assumptions about the size of the equity-risk premium, these have included the maturing of defined benefit liabilities, which have inevitably pushed investors towards fixed-income. Another factor has been regulation, both international and domestic.

ERI has sought from the outset to keep its research output focused on current issues faced by institutional investors, at the same time testing the assumptions behind regulation (actual or proposed), be they the tenets of Solvency II or the effect of a financial transaction tax.

As investors have adopted risk-management techniques of greater sophistication and adapted their portfolios accordingly, one of the most significant changes in investment practice has been the use of liability hedging and performance-seeking portfolios (LHPs and PSPs).

Noël Amenc, the institute’s founding director, who stepped down in July to take over as the head of ERI’s Scientific Beta entity, looks back on the academic work on institutional investment and risk management approaches since 2001. ERI, he says, has made clear through its research how hedging, diversification and portfolio insurance can add value. The institute has always claimed that the goals of the PSP and the LHP need to be clear from the outset.

“The intention of diversification is not to lower the risk of the allocation itself but to offer the best performance-seeking portfolios possible,” says Amenc. “On the other side, the intention of the hedging portfolio is not to perform well but to hedge the liability risks as well as possible, and investors’ attention here should be focused on hedging. This clarification of the roles means that there are simple questions to solve and the answers are therefore robust.” 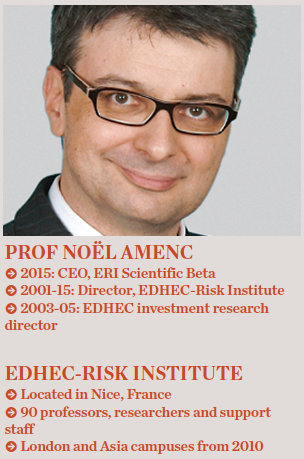 The boundaries between the liability hedging and performance-seeking portfolios is not always clear for some investors. “One can understand that many underfunded institutional investors want the LHP to perform, to the detriment of its hedging capacity,” says Amenc. “ERI has shown that this is not the right solution and that if one wishes to cope with underfunding, it is better to increase the risk of the allocation by raising the value of the PSP and possibly, ex-ante Sharpe ratio of the PSP, to find the one that creates the least funding ratio volatility.”

Another important part of ERI’s research has been to highlight the need for risk discipline in long-term assets like equities, where there is still a widespread belief that mean reversion precludes the need for sophisticated risk management techniques. ERI has found that techniques like dynamic risk budgeting in ALM allow for short-term risk constraints to be integrated from the outset with less opportunity cost than static or ex-post approaches using value at risk (VaR).

Much of ERI’s early research output was on hedge funds, when the talk was all about alpha. Now there is more talk of beta, especially smart beta. Confusion of terminology aside, are these always positive developments?

“Yes,” says Amenc. “Our academic DNA has always driven us to look for the ‘normal’ performance of the various asset classes, whether hedge funds, commodities, real assets, equities or, more recently, infrastructure. We think that betas are the main drivers of the long-term performance of asset classes, and therefore the ingredients for any institutional investor’s allocation policy.”

“In some asset classes, these betas are not just statistical entities representative of risks and the associated premia but also investable supports. We observe that the hedge fund universe is currently confronted with the liquid alternative risk premia revolution and that this movement exists today in the long-only universe, notably with smart beta.”

But there is a caveat: “We are warning asset managers and investors against the temptation to over-innovate, creating new betas every morning, with the risk of sinking into factor fishing or mining and thereby disappointing smart or alternative-beta investors due to low levels of robustness. Smart beta, for example, has genuine academic justifications, but these also have rigour and robustness constraints for the research implemented.”

A risk of smart beta and associated “innovative” ideas, Amenc continues, can be to “ask an index to do too much” – for instance, wanting both to be concentrated in stocks that have strong exposure to multiple risk factors but at the same time diversify.

“Rather than wanting to have multi-factor indices with complex objectives that combine factor purity and diversification, long-only investing would do better to aim to have smart-factor indices that perform well because they are well diversified and exposed to the right factors and guarantee that the factor exposure target is respected through allocation between indices rather than through the application of black box multi-factor schemes to construct indices that are all things to all men which they cannot control.”

Institutional investors have been confronted with numerous waves of regulation in recent years. How useful and effective has this been? Regulation is often designed as a response to a problem rather than as a rational approach that aims to improve the functioning of financial markets, says Amenc. “Under the impetus of politicians, the regulator often confuses financial markets and the financial industry to punish the latter, or at least to limit its profits, and by so doing it makes financial markets less efficient.”

Politicians, Amenc also points out, have also preferred to blame hedge funds when investment banks, in fact, took excessive risk. “An intervention to strengthen the solvency and capital levels of the establishments in the summer of 2007, which ERI was calling for, and not in 2008, which was what the governments did, would probably have avoided numerous bankruptcies and led to a much lower economic cost overall.” Other areas of misdirected regulation include that concerning derivatives and also the proposed financial transaction tax.

“The problem with regulation today is that it has become part of the public debate since the crisis and an issue that is no longer technical but political,” concludes Amenc. “Since our continental European political culture is nourished by finding rich and stateless scapegoats, it is easy to claim that this is where absolute evil can be found, and not our inability to reform our economies and their governance.

“Ultimately, to avoid the effort of these reforms, leaders do not hesitate to favour speculation, or at least to stimulate speculative bubbles through enormously accommodative monetary policies that no longer allow market mechanisms to perform their price-formation role fully, according to the risks of the assets.

“This was the case with the US monetary policy in the Greenspan years, which prepared the sub-prime crisis of 2007 and is now the case with ‘Super’ Mario [Draghi] who, in our view, is preparing a future European sovereign crisis.”