“I have been managing director at MetallRente since the beginning, exactly since 1 November 2001,” says Heribert Karch, weeks before leaving his post after 20 years at the helm of the German pension scheme. MetallRente has also just celebrated the twentieth anniversary of its foundation. 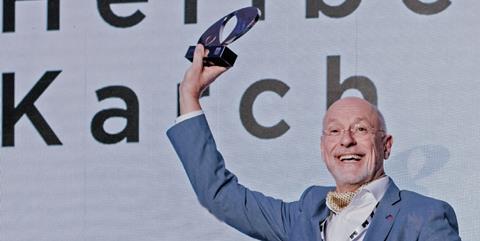 This may be one of Karch’s last interviews, conducted between back-to-back meetings, before retiring at the end of December after a life spent dealing with pensions and reforms. Karch had just been in Madrid to receive the IPE Award for Outstanding Industry Contribution (pictured). He embodies the history and the progress made by MetallRente.

In 2002, Karch had to come up with an outlook for the potential development of the industry-wide pension scheme in the years to come. He recalls: “I stated 5,000 companies and 400,000 pension promises.” As of today, almost 50,000 companies have joined the scheme that reached nearly 850,000 single pension promises and 150,000 disability insurance contracts.

“When we founded MetallRente, we did not create a mandatory pension fund, but a voluntary scheme competing in the market. That was the agreement between our shareholders, the partners in the collective bargaining process, IG Metall and Gesamtmetall,” he says. At the time, MetallRente lacked the expertise of a Dutch or Danish pension fund, but was able to build its own success story. In the past three years, the scheme has grown in a stagnating market. “Since 2018, we have grown, on average, by 7.7% per annum in terms of new pension promises,” Karch says.

Direct insurance is the most common type of occupational pension at MetallRente. “The reason is mainly that it is easier for insurance salesmen to explain ‘direct insurances’ as they have been there for decades,” Karch says. Employers who sign up for the direct insurance from MetallRente invest capital through a consortium of insurers.

Heribert Karch
CEO of MetallRente for 20 years, Heribert Karch reflects on the past and future of German pension on the eve of his departure

However, since 2002, the year of the introduction of Pensionsfonds, Karch has been advocating for it as the “ideal pension plan, especially for younger people”. Still, the share of Pensionsfonds take-up at MetallRente is quite small compared with direct insurance, he points out.

After Karch’s departure, the new lead management of MetallRente will consist of a duo. “Our shareholders Gesamtmetall and IG Metall have jointly appointed two renowned pension experts,” Karch says. Hansjörg Müllerleile, the new CEO, is currently director of corporate pensions and related benefits and head of legal affairs at Bosch Pensionsfonds. Kerstin Schminke, the incoming managing director, is a political secretary in the tariff policy department of the executive board at the trade union IG Metall, and has been a member of MetallRente’s advisory board since 2014 and is a member of the investment committee. “They will make a great team,” says Karch. “I have known both for 15 years and MetallRente will continue to develop very well, I am sure.”

Furthermore, Karch adds, MetallRente hopes that employers and employees will agree on designing “secure social partner models” in the future. This is a fairly new defined contribution (DC) model for German pensions that can, realistically, only be implemented on the basis of a collective bargaining agreement. MetallRente has already carried out preparatory work for new DC models, but the decision is to be taken by IG Metall and Gesamtmetall.

The law approved in 2018 introducing pure DC plans has failed, so far, to boost the emergence of new pension arrangements.

“Everybody knows that I was also involved in the design of the law to strengthen occupational pensions that was passed in 2018. Although a ‘social partner model’ has not been signed yet, I am optimistic that employers and employees won’t leave this important field untouched,” Karch says.

He believes that the best way to finance pensions is a dual-core system consisting of the state pension and occupational ‘social partner’ pensions based on a DC system. “Introducing the DC system through social partner models has been the most important pension reform since 2001,” he says.

A new pension deal
Introducing social partner pensions based on pure DC requires a new financial pension deal, according to Karch. He says this issue cannot be solved by companies’ work councils but by employers and employees representatives: “That is the freedom of collective bargaining according to German law.”

Usually, with collective bargaining in Germany, one sector strikes an agreement and other industries follow suit. “For social partner models, however, the labour agreement has to be legally relevant. This means that a labour agreement at company level has to follow a collective agreement of that specific industry sector,” Karch says.

Companies may have an option to take the collective agreement of another industry as reference. With collective bargaining agreements companies would collectively join social-partner models. Karch argues: “If you start at company level, you kick off a much slower incremental process, in which more and more companies pick up the model over time.”

German pension policy over the past decades has gone through difficult political discussions and lobbying activities. “Germany has strongly focused on the third pillar, on private pension insurance contracts, instead of strengthening occupational pensions,” Karch says. Occupational pensions are still not mandatory. “This remains my main criticism of German pension politics: they have not designed a consistent system, especially regarding the tax regime. The political process of the past 20 years has not followed a clear approach towards first, second and third pillar,” he says.

Germany’s so-called traffic-light coalition government agrees that the social-partner model has to be implemented. But the debate has shifted towards the idea of a public fund under Deutsche Rentenversichreung that would invest to finance pensions.

Karch says that the idea is not new. It simply aims to stabilise the first pillar by allowing it to invest a relatively small amount of resources in the capital markets. “Therefore, I think it is problematic to allocate such investments in the first pillar. Even if it contributes to financial stability, it may take 30-40 years. What do you do in the meantime when the level of pensions drops?”