How we run our money: Apoteket Pensionsstiftelse

Video-based interactions have many downsides, but they occasionally allow a glimpse into other people’s day-to-day working lives that would have been difficult to get otherwise. These days, a typical Zoom call with Gustav Karner, CEO and CIO of the Apoteket pension foundation, can begin with an accidental showcasing of trading skills. 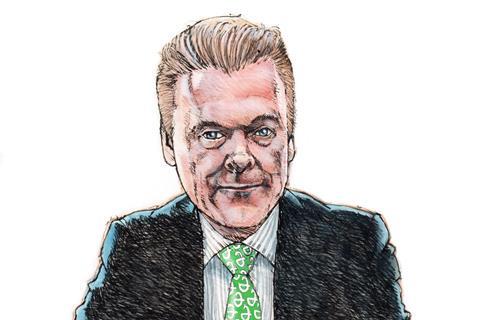 “I was trying to trade US dollars for Swedish krona, but I had to suspend the trade in order to avoid moving the market, something which I did not foresee,” are Karner’s first words after he appears on the screen.

“Ours is not a particularly large institution, but due to the low levels of liquidity these days, even an institution like us can move the market. I was trying to trade a relatively large amount, and would have got a good price anyway, thanks to the recent strengthening of the dollar against the krona. But I did not want to move the market, so it will be a case of stepping back and executing the trade at a later date, in more than one block,” he adds.

The pension foundation manages the pension assets of Apoteket, the Swedish pharmaceutical retailer. Karner joined the organisation five years ago, after serving as CIO of the Nobel Foundation from 2012 to 2017. On reflection, a hands-on approach to managing money is exactly what Karner is about – therefore, catching him in the midst of action is not a surprise.

At the Nobel Foundation, he was tasked with the difficult job of delivering the minimum return that is needed to maintain the value of the Nobel prize. To achieve that, Karner, with the support of the investment committee, switched most of the management equity portfolio from active to passive, reduced the duration of the fixed-income portfolio and implemented allocations to smart beta strategies and hedge funds, among other things. The returns from the portfolio delivered well above the target.

“I decided to turn things upside down and focus very much on setting the right objective, which meant reviewing the liability profile and the cashflow schedule for the foundation. We also analysed the wider pension industry in terms of what other institutions were doing and based our asset allocation model on those considerations”

Upon joining the Apoteket foundation, Karner faced a different situation. The €1.3bn pension foundation, which looks after the pension assets of the state-owned pharmaceutical retailer Apoteket, had a track record of positive returns. The management of the assets, primarily domestic equities and fixed income, was carried out internally, with good results but significant costs, according to Karner.

Aside from the large costs, over the years the foundation had built up a significant exposure to both market risk and also the operational risks that come from handling investments internally.

“With the blessing of the board, I outsourced the investment of those portfolios to external managers. I also outsourced the risk management and administration of the portfolio and other functions of the institution. All that took quite a bit of time,” he says.

The outsourcing initiative reduced the number of staff employed by the foundation, many of whom found new opportunities with the the institution’s external service providers.

Then, the CEO turned to the institution’s investment strategy, with a different approach from the past.

He says: “The way things are usually done, is one would establish an objective based on an asset-liability management study, choose the asset allocation model and work the way down to implementation and administration. This approach tends to consume a great deal of resources on the latter part.

“I decided to turn things upside down and focus very much on setting the right objective, which meant reviewing the liability profile and the cashflow schedule for the foundation. We also analysed the wider pension industry in terms of what other institutions were doing and based our asset allocation model on those considerations.”

To do that, Karner hired Oskar Arvidsson, a young mathematics graduate of Stockholm University. Arvidsson took a deep dive into the foundation’s liabilities and estimated the cashflows that the foundation would need to produce on a yearly basis.

“We worked very intensely on the goals of the portfolio of the foundation and we developed several scenarios, both good ones and bad ones, to test the performance of the current portfolios. We eventually presented our estimates to the board and discussed with them what risk tolerance the foundation should have. The foundation is relatively large compared to the sponsor, but thankfully, the foundation is in a position of financial strength,” says Karner.

Instead of focusing on tactical asset allocation, as had been the case before Karner stepped in, the foundation now runs a proprietary ALM study every year and adjusts the strategy to the risk scenarios that emerge from the studies.

Karner says: “When I joined, 30% of the portfolio was allocated to mostly Swedish equities, and the first ALM study was an eye-opener from that perspective, as it led us to take the allocation down to 20%, which is now allocated to mostly global equities.

“We decided against investing the additional 30% of assets in investment-grade fixed income, which offers very low yields at the moment. We still believe that real rates will not rise significantly over the next few years. This is because of the serious problems that rising real rates would cause given the sky-high levels of debt worldwide.”

Instead, the foundation opted for building a portfolio of absolute-return strategies, mostly alpha-focused, but with an allocation to insurance-linked risk as well.

Karner says: “Of course, locking in the assets over longer periods as required by some absolute-return managers is not ideal. But it is part of what makes absolute-return strategies work, as it means that managers are not forced sellers of assets.”

The CEO is a long-standing supporter of and an expert in absolute-return strategies, and he is not afraid of running an absolute-return portfolio with a small team, which currently consists of him and Arvidsson.

It helps that Karner has a clear list of requirements for absolute-return managers. “First of all, I prefer managers that have been through the 2008-09 global financial crisis, and I ask them to describe exactly how they got through it. I want to know how they have performed during good times but also bad times, such as the European debt crisis or the Chinese slowdown of late 2015,” he says.

Karner adds: “When building an absolute-return portfolio, of course diversification across different types of strategies is crucial. It raises the likelihood that the portfolio will perform well in both years of normal returns and sub-normal returns. This is especially if the managers have been around for a long time and have a strong risk culture. That is why when we select managers we tend to talk more to risk managers than to portfolio managers.”

Some of Karner’s requirements for managers include having a Sharpe ratio above 2, having AUM of at least $1bn and being able to show a low correlation to equities on a weekly basis. Additionally, Karner requires that fund managers have a robust operational set up, including well-known custodians, administrators and external auditors.

Finding managers that fit all these criteria may sound difficult, but Karner says: “If you run a Google search for ‘top 10 hedge funds’, all the names you get more or less meet those criteria. The problem is that they do not have capacity to take on additional investors. But that is no reason not to establish a relationship with them. The opportunities to invest with them become available more often than one would expect.”

Absolute-return funds notoriously charge high fees, which begs the question, why did Karner build a portfolio of such investments, if the initial strategy was to cut costs?

“There are two sides to the issue. High fees can be a drag on net returns, but funds that charge high fees usually attract good people. They can also achieve much more than we could ever do if we invested on our own in the same strategies or assets,” says Karner.

“Investments in renewable energy companies, both public and private, can deliver good returns at relatively low risk, particularly for investors who can buy in early. We have done several investments already and will most likely invest in another fund this year”

“Besides, whatever you are investing in, you should look at the returns generated by the fees and evaluate the manager on that basis. That is why we take into account net returns in our risk and ALM models,” he adds.

The foundation also has investments in private equity and private debt, but these are relatively small legacy investments. Karner says that the institution is in the run-off phase and has a heavy liability schedule, paying out about 4% to 5% of the assets each year, with no inflows. That means it is unable to lock money in for the lengthy periods of time that private equity and private debt funds usually require.

The institution invests in renewable energy, an area that Karner looks at with increasing interest. He says: “The energy mix has to change in the future if the world is to confront global warming. Investments in renewable energy companies, both public and private, can deliver good returns at relatively low risk, particularly for investors who can buy in early. We have done several investments already and will most likely invest in another fund this year.” 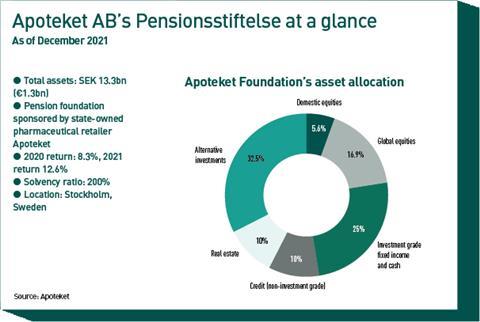 ESG is a central part of the foundation’s strategy, according to Karner. From a strategic point of view, the institution looks at ESG as a way to obtain better risk-adjusted returns. It engages with managers and funds that have an explicit ESG strategy and regularly reviews the portfolio, with the help of an external consultant, to assess ESG risks. But the focus is increasingly on impact, as well as risk, and Karner says that investing in renewable energy is the institution’s way to achieve that.

In just over five years, Karner has refitted the Apoteket foundation, preparing for some potentially tough times ahead. The market conditions of the past five years were relatively benign, albeit very unusual, but some of the possible scenarios of the next few years contemplated by the institution are difficult to say the least.

“The two most important themes are real rates and inflation and they are closely linked. On the one hand, our investment committee believes that we will not see real rates rise for quite a long time, which changes the valuation perspective. By any standards, markets are expensive, but valuations are anchored by the low real rates,” says Karner.

“However, we know that central banks will start reducing their stimulus, we can expect higher volatility in all asset classes. Higher inflation rates will persist, if not for the long term, and central banks will accept some overshooting.”

This is therefore not the time to be overweight in risk assets, but instead to find strategies that maintain a low exposure to equity risk and traditional fixed income risk, says the CEO. Thankfully, he appears to have a deep knowledge of the areas where such strategies can be found.