How we run our money: Church Commissioners for England

Tom Joy, CIO of Church Commissioners for England since 2009, says he feels blessed. He says this in relation to two closely-linked aspects of his job. One, that in the UK it is “as pure an investment role as you could get” and two, that the committee overseeing his team’s day-to-day management of the fund is so supportive and experienced.

The Church Commissioners are unusual in that they are part pension fund, part perpetual endowment, although predominantly the latter. The fund is responsible for clergy pensions accrued before 1998 and for supporting the wider Church through distributions. These represent around 15% of the Church’s annual running costs and, at about £300m a year, makes the Commissioners one of the largest charitable givers in the UK.

The 33 Church Commissioners were constituted in 1948 by merging two bodies – Queen Anne’s Bounty, formed in 1704 to support poorer clergy, and the Ecclesiastical Commissioners, which was set up in 1836 to administer several functions of the Church.

In 1999, the Archbishops’ Council was formed, giving strategic direction to the Church of England and providing the Commissioners with a clear focus on making the most of their investments to support the work of the Church.

“We’ve been fortunate enough to do that,” says Joy. “Since 2005, our distributions have grown by close to 7% per annum, which is three times the level of inflation. We’re obviously pleased.”

That period spans a few years when, post the global financial crisis, the Commissioners held distributions flat, while many other more traditional endowments cut theirs.

“I think our beneficiaries were very grateful for that,” says Joy. “The Church likes its stability and so our objective is very much around delivering sustainable distributions.”

The Church Commissioners’ £9.2bn assets are run by what Joy describes as a well-resourced investment team of about 60 people.

“For our size that would be a very large team, but we need that because we invest across a very broad range of asset classes,” he says. “They’re not unique to us but they are not so commonly held, particularly across our real assets portfolio.”

The asset classes include forestry and venture capital, with the Commissioners being early adopters of both. The fund set up its forestry programme over 10 years ago, before the current excitement about forests as an institutional asset class. The Commissioners are now one of the largest private owners of forestry in the UK.

“Since 2005 our distributions have grown by close to 7% per annum, which is three times the level of inflation. We’re obviously pleased”

“We do really focus on what we would label genuine diversification,” Joy says. “We have a meaningful allocation to private markets – private equity and venture capital – but we’re not completely equity dominant as many other funds are.”

The fund’s investment objective is to achieve a total return of CPIH-plus 4% per annum measured over the long term. CPIH is the consumer prices index including owner occupiers’ housing costs.

Joy says the Commissioners do not change their long-term investment return target often, although it was lowered from RPI-plus 5% per annum to the current target in 2019, because the team felt the return opportunity was lower.

“If you have a fixed investment target when the opportunity set that the market is giving you in terms of prospective returns is lower, you have to increase risk to meet your target return. And that seems completely counterintuitive to us,” says Joy.

At the same time, the Commissioners do not often change its target return; 2019 was the only time in Joy’s 10 years at the fund that it has done so.

Like many other investors, the Commissioners believe that asset allocation is the dominant determinant of returns.

The Commissioners also believe that the price paid for an asset or an investment is a powerful determinant of future returns.

“That sounds so obvious, but it’s amazing how few people pay much attention to it,” Joy says. “Given that belief, we have very wide bands around our allocation and we can vary it through time, depending on the market opportunity set.”

About 40% of the fund’s assets is managed internally and about 60% is managed externally by third parties, on what Joy says is “a genuinely global basis”.

The proportion of the Commissioners’ assets that is managed internally is likely to grow, according to the CIO.

“It already has been growing, and in a few years I wouldn’t be surprised if it was up to 50/50. There are a couple of areas where we think doing public equities internally will be better, so we will probably do a little bit more of that and we’ve started that process.”

The fund does not own any government bonds at the moment but if that changes it would also manage these itself, Joy says.

The Commissioners actively manage their portfolio, but are of the view that there is an inverse correlation between the efficiency of an asset class and the success of active management.

In public equities, for example, the fund doesn’t target a very high level of active management – 1% above the market over the long term will do – but it has a different perspective when it comes to areas like private equity and venture capital.

“They’re very inefficient asset classes and unless you can gain access and partner with the very best managers it’s not worth doing,” says Joy. “Buyout is inefficient but venture capital is even more inefficient.”

The Commissioners have about 12% of their portfolio invested in private equity and venture capital, investing through third-party managers.

“We decided to go for a direct approach to venture capital in about 2017,” says Joy. “Before that we’d invested through funds of funds, but that had an extra layer of fees.”

The fund has internal tactical allocation capabilities, and Joy says this is important because it is harder to hedge portfolios now than in the past. In 2019, the Commissioners received approval to set up an internal derivative capability to better manage and hedge its investment portfolio.

“We didn’t quite predict the level of volatility that we were going to live through but it has proved very beneficial in the past two years,” the CIO says.

The work of the 60-strong investment team is overseen by an investment committee. It meets six times a year, but taking into account sub-groups there are 18 interactions between the investment team and the non-executive trustees during the year.

“We’re very clear about the level of commitment involved in being a trustee,” says Joy.

He also mentions that the committee has “a really good balance between what I would label stakeholder representation and subject matter expertise”. The trustees’ understanding of the Commissioners’ goals and approach helps it avoid “making bad decisions just at the worst possible moment”.

The CIO is grateful to the investment committee for allowing him to have “such a high-calibre, well-resourced” team.

“Investment is a people business,” he says. “I don’t have hard, concrete evidence of this, but I fear that sometimes investment committees or asset owners worry too much about their on-balance sheet costs, whereas they’re happy to pay hundreds of millions of pounds to third-party managers. 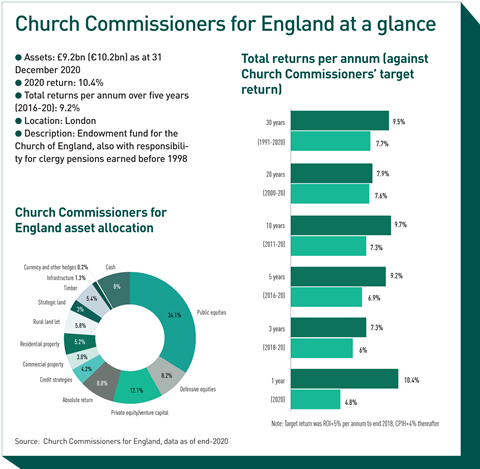 “I’ve always stressed that if we want to have this genuinely diversified investment portfolio, then we want rigorous and strong plumbing in terms of middle and back-office support. You’ve got to have a real willingness to invest in your people.”

With this in mind, he describes the Commissioners’ operations team as a source of alpha.

“I know that is a bit unusual, but the scrutiny we put over our suppliers constantly leads to cost savings, which I think more than pay for the investment that we are making in that level of resourcing.”

The Commissioners have a multi-year history of active engagement with companies, and filed a climate change shareholder resolution at oil giant Exxon as long ago as January 2016, almost two years before Climate Action 100+ came into being. In 2020, the Commissioners and the Church’s other national investing bodies for the first time restricted investment in companies on specific climate change-related grounds.

“You can’t just rely on engagement,” Joy says. “If companies don’t engage, ultimately there must come a point when it’s not credible to utilise the engagement argument and so divestment must be a tool in the armoury that investors are willing to use in the face of intransigent companies.”

Exxon is one of the companies that was added to the blacklist this year, but the Commissioners will, for now, not be divesting the company because of the success of the shareholder campaign it supported last year, that resulted in three new board members being elected in June 2021.

The Commissioners want to give the new directors more time to work with their Exxon board colleagues.

“We hope this successful engagement will have an impact on Exxon’s strategy, capital expenditure and ultimately on their emissions and alignment with the Paris Agreement. If not, we would divest.”

The Church Commissioners were a relatively early mover on the net-zero commitments made by companies around the world. In 2020, at the World Economic Forum in Davos, the fund announced it had joined the UN-convened Net-Zero Asset Owner Alliance. A year later, it announced its target for 2025, to reduce the carbon intensity of its investment portfolio by 25%, based on a baseline of 2019.

Asked about the prospect of the Commissioners setting an absolute target and the challenges involved in communicating progress against the fund’s target and how this relates to the real economy, Joy says: “The first thing to say is that this is a complicated issue and cutting through that in a simple narrative is not easy.

“We’re always working on our communication strategy but it is correct that we want a net-zero real economy, not just a net-zero portfolio.

“And the two things are different. It’s easier to create a net-zero portfolio but affecting change in the real world is what we want.”

The fund has done some important work on the topic of investing for impact. In a November 2020 report, it set out its initial thinking about “the difficult issue” of how to measure the alignment and contribution of investments to social and environmental issues. The report was hailed as a pioneering work by the director of the Impact Investing Institute.

The fund’s work on impact investing is one element of its responsible investment activity that Joy says adds to the satisfaction he gets from his job.

“Making money for the Church of England is rewarding, but what we’re achieving on the global scale, even though we’re small, has become increasingly powerful,” he says.