How we run our money: The People’s Pension 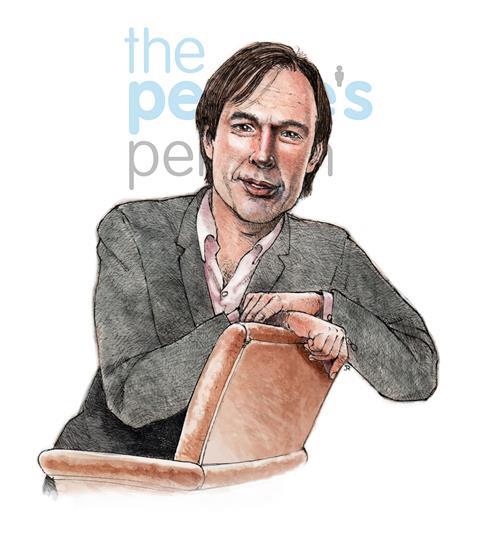 “We’re trying to be boring”, says Nico Aspinall, CIO of The People’s Pension, one of the largest occupational defined contribution (DC) pension schemes in the United Kingdom.

“That means focusing on doing the normal, routine things well, rather than trying to overdo anything. As a DC scheme we want to make sure we can offer an all-weather default strategy, which will perform consistently whatever markets do and whatever a member’s personal circumstances are.

“We are not going to do the best job for anyone in any set of markets or personal circumstances. Our aim is to provide consistent return for our members. Our default fund might be in the 80th percentile in terms of performance compared to the retail universe, because we know what we set out to achieve,” Aspinall says.

That, in a nutshell, is the CIO’s philosophy for running a successful DC scheme.

In the UK’s pension industry, The People’s Pension is known as a ‘master trust’. The term identifies multi-employer occupational DC schemes that were set up to manage the pension savings deriving from the UK’s automatic enrolment programme launched in 2012.

The scheme was created by B&CE, a not-for-profit financial services company, founded in 1942 to guarantee holiday pay for construction workers. To this day, the company offers several financial products to workers in the construction sector.

Over the past decade, The People’s Pension has amassed £15bn (€17.4bn) of assets and manages the retirement savings of more than 5m UK employees, branching out from the construction sector to every sector of the British economy.

Aspinall, a theoretical physics graduate from the University of Cambridge, has spent several years working as a consultant to DC pension schemes. He was head of UK DC investment consulting at Willis Towers Watson until 2016 and then operated as an independent consultant for just over a year. He was recruited by The People’s Pension in 2017, as the company institution created the CIO role to manage its fast-growing assets. A fellow of the Institute and Faculty of Actuaries, Aspinall will be leaving The People’s Pension soon to join impact investment management firm Connected. At the time of writing, The People’s Pension was yet to announce a replacement.

Aspinall’s seemingly simple approach is reflected in the scheme’s strategic asset-allocation model, which relies on equities, bonds, property and infrastructure indices. At present, partly owing to the scheme’s focus on indexed portfolios, The People’s Pension employs State Street Global Advisors as the main external manager of its members’ savings.

The scheme’s equity portfolios are allocated globally and according to three different indexation styles – market capitalisation-weighted indices, factor indices and a style called ‘adaptive capitalisation’. Aspinall describes the latter as a hybrid between market capitalisation and equal weighting, with a tilt towards small-cap stocks.

With that asset-allocation model, the scheme carries members through a 15-year ‘glide path’ at the end of the DC journey, gradually switching members’ portfolios from equities to bonds as they approach retirement.

Aspinall leads an internal investment team of 10, split between operations, which takes up the largest number of staff, asset allocation and client governance. The latter group deals with employers and trustees and carries out the policy work. The asset allocation group is being developed to meet the strategic needs of the scheme, including the potential to invest in unlisted assets in the future.

“As a DC scheme we want to make sure we can offer an all-weather default strategy, which will perform consistently whatever markets do and whatever a member’s personal circumstances are”

Further into the conversation with Aspinall, the complexity of his thinking around DC pensions increases quickly. He starts from a simple premise, but one which has powerful implications.

“The best way to make DC pensions work is to ensure high levels of contributions and to offer a limited number of options to members,” Aspinall says.

“In that sense, it is important to reflect upon the difference between DC pensions and retail savings. We think it is sensible to put a risk-and-return lever in the hands of our members, which we do by offering a lifestyle product with a 15-year glide path. We also offer some simple choices, like Sharia-compliant and ethical portfolios, to members who might otherwise refuse to engage with us.

“However, all of the behavioural science of the past two decades tells us that the more choices you put in front of members, the worse off they are in terms of outcomes. That is why we focus on the quality of the default fund.”

The People’s Pension is in a fortunate position, in that it receives about £250m per month in contributions. Thanks to that steady flow of liquidity, it has never been under pressure to sell assets of the default funds, and older members can comfortably switch from equities to bonds as they approach retirement, without needing to sell in the market.

Limiting the options for members means placing greater responsibility on the scheme’s governance. “As a DC scheme, our trustees are there to make sure our members make the most of their savings, and a key aspect of my job as CIO is making sure that the trustees have the right information on the most impactful topics. This way the scheme can stay focused on the right time horizon”, he says.

The past years have given the scheme’s governance forum many short-term issues to think about. The challenge has been to decide which situation needed to be dealt with and which did not, according to Aspinall. Last year, in particular, the governance process was put to the test on two fronts.

“In March of 2020, at the start of the COVID-19 emergency, equities were tanking and bonds were getting closer to the level at which we are required to rebalance as part of our framework. We spent a lot of time thinking whether it was sensible to sell bonds and buy equities, in terms of timing but also of market impact. We discussed at length internally and with our fixed-income manager. In the end, we decided to stick to our tolerance limit and that resulted in us buying equities near the bottom of the market, which delivered a great deal of value for our members,” says Aspinall.

In the early days of COVID-19, the scheme faced another situation requiring intense dialogue and quick thinking by the board. At one point, there was a chance that the UK government could turn off employers’ contributions to DC schemes to deal with the short-term pressure of COVID-19 closures. That would have caused unprecedented liquidity issues for the scheme. 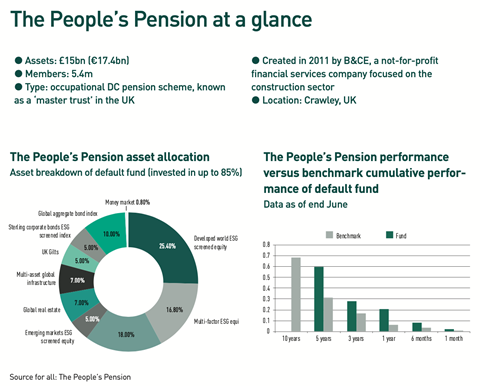 Aspinall says: “Had the government decided to suspend auto-enrolment, our liquidity hose could have been switched off very rapidly. We do currency hedging through a derivative overlay, which means that on a monthly basis we have cash calls on those derivatives. We faced the risk that we would have to sell assets in falling markets to meet the cash calls. We were generally worrying about liquidity, due to the possibility that the markets would close down. We decided to start building diversified cash reserves to prepare for a possible suspension of contributions. That required significant changes to our framework in terms of adding a liquidity fund to the allocation, which we had never had before.”

Thankfully, contributions were never suspended, but the fund learned a valuable lesson for the future, adds Aspinall.

These episodes suggest that, while members of The People’s Pension might be enjoying the smooth growth of their portfolios, running the scheme is anything but boring.

The scheme may offer limited choice to members by design, but it does offer guidance to members as a way to keep them engaged. Part of the effort is making sure members feel confident that the value of their pension savings is protected from inflation.

As it happens, the risk of inflation has risen significantly as the global economy recovers from the COVID-19 crisis. But while Aspinall recognises that inflation is the main long-term risk for DC scheme members, he does not see the current inflation spike as a significant threat.

“There is inflation coming through due to post-COVID supply constraints, but at the same time there is a huge number of people who are unemployed, which should keep wage inflation in check. The demographic shift, which keeps the savings ratio at a high level, continues. I just do not see central banks being too concerned about inflation. In fact, the risk is that we get further into a Japan-type scenario of low inflation, low interest rates and low growth. In any case, we are heavily invested in inflation-protected assets like equities and property,” says Aspinall.

As the CIO of one of the largest UK workplace DC schemes, Aspinall can speak with some authority on the gradual but irreversible shift from defined benefit (DB) to DC pensions that is taking place across Europe. While the shift constitutes a great opportunity to secure the retirement of European workers and ease the burden off Europe’s corporations, it has systemic consequences. Risk is increasingly transferred to individual pension savers while DB schemes are still keeping corporate balance sheets volatile.

“I just do not see central banks being too concerned about inflation. In fact, the risk is that we get further into a Japan-type scenario of low inflation, low interest rates and low growth. In any case, we are heavily invested in inflation-protected assets like equities and property”

The topic has suddenly acquired new relevance in the public discourse because of a recent letter sent by UK Prime Minister, Boris Johnson, and Chancellor of the Exchequer, Rishi Sunak, to institutional investors. The letter challenges UK institutional investors to invest in UK growth assets, particularly venture capital, as a way to support and relaunch the economy in the wake of the COVID-19 crisis.

The problem with that challenge is that DB schemes, many of which face pressure in terms of cashflows, can hardly bet on more risky assets. Meanwhile, DC schemes are compelled to keep charges low and members engaged, both of which require caution around illiquid assets.

The timing for such a challenge does not seem right. Many UK institutional investors, including Aspinall, who was consulted by the government before the letter was drafted, have voiced some concerns.

Aspinall says: “Having a UK bias might be positive, but not in listed markets. And even in unlisted markets, it is unrealistic to expect investors to focus solely on domestic assets. Furthemore, the letter challenges investors to invest in venture capital, which is at the far end of the risk spectrum. It is a very different discipline compared with investing in established listed companies, which is what DC schemes have to mostly rely on to reach their objectives.

“I am not sure that the challenge will achieve what it set out to achieve. What we can do is try and talk to the other DC market participants about pulling together resources to achieve scale and co-invest in certain opportunities, which would give returns for members but would not cost as much.”