Ilmarinen: The making of a Finnish pensions legend 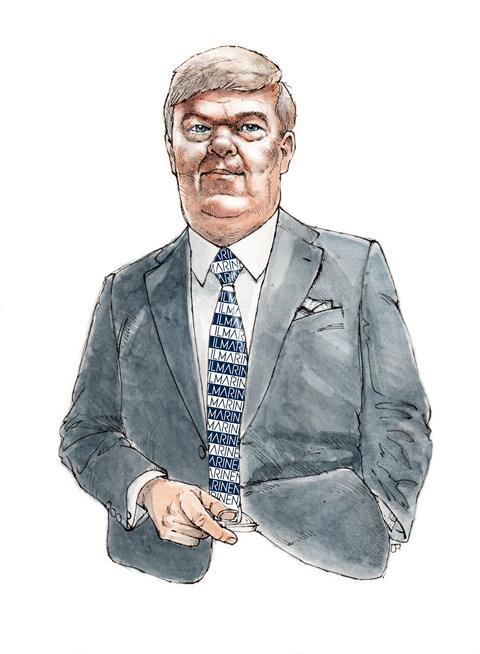 The largest of Finland’s providers of earnings-related pensions, Ilmarinen, is named after one of the many deities of Finnish mythology. Ilmarinen is an immortal being, a blacksmith who forged the dome of the sky, among many other legendary artefacts, and is prominently featured in the country’s 19th-century national epic, the Kalevala.

Perhaps Ilmarinen’s founders did not set out to create a mythical identity for the pension company. Nevertheless, the name seems fit for an organisation whose sole pursuit is to provide defined-benefit pensions in an increasingly challenging environment, both in terms of market conditions and regulation.

Today Ilmarinen provides Finns with earnings-related pensions alongside Varma and Elo, which are also mutual insurers, and Veritas, a limited-liability company.

These companies compete for business from employers and self-employed workers. Ilmarinen insures 591,200 employees and pays pensions to 460,000 retirees. At the end of last year, it managed €61.7bn of assets, having earned a return of 15.3% for the year.

When Ilmarinen’s results were released earlier this year, deputy CEO and CIO Mikko Mursula said that the relatively defensive stance of its absolute-return portfolios acted as a drag on returns to some extent. However, the equity portfolio returned 28%, partly thanks to exceptionally good returns from private equity investments.

Mikko Mursula began his career at KPMG in 1992 and has spent most of his career in investment management. In 2000 he joined Ilmarinen as an equity portfolio manager and was appointed head of listed securities in 2007, to lead a team of about 20 professionals.

Three years later, he left Ilmarinen to become managing director and then CEO of FIM, a Finnish asset management and financial services group. Mursula then re-joined Ilmarinen in 2015 as CIO and deputy CEO. 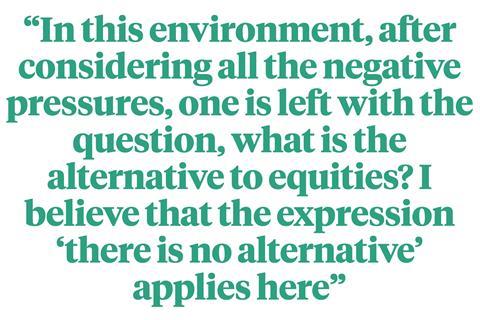 Finnish pension providers tend to have a large allocation to equities, which is notable since Ilmarinen and its peers must meet stringent solvency requirements.

Mursula says the solvency capital ratio does not get the same attention from the public and the media that returns do.

“That is, unless a company were to fall below the minimum set by the regulator,” says Mursula. “And yet, the higher the solvency ratio is, the greater risk we can take with our portfolio, and the greater the potential amount we can pay back to our customers in terms of bonuses.”

Ilmarinen had a solvency ratio of 136.7% at the end of last year, which meant it paid €209m in client bonuses.

Ilmarinen is among the relatively few European institutions that have committed to achieve net-zero greenhouse gas emissions by 2035.

“We are perfectly aware that this is an ambitious target,” says CIO Mikko Mursula. “That is why at the end of last year we published two detailed roadmaps at the asset class level, outlining how we intend to achieve our target through our listed equities and our real estate portfolios. And there are more roadmaps to come.”

The real estate roadmap, for instance, sets out which locations, types of buildings and specifications the organisations will be seeking when developing domestic projects.

“This allows us to integrate that target deep into our regular portfolio decision-making process.”

As part of the roadmap for equity portfolio, the company has planned to exit sectors such as thermal coal and it has grown its allocation to index funds based on a responsible benchmark index, to cover as much as 95% of its passive listed-equity portfolios. This was partly achieved by developing five new ETFs that consider sustainability criteria. The active portfolio, too, is benchmarked against global indices tilted towards ‘ESG leaders’.

The company has also stated its commitment to assess the available opportunities to invest in technologies that can speed up the decarbonisation of the economy.

Ilmarinen uses the framework of the Task Force for Climate-Related Financial Disclosures (TCFD) and reports extensively about its carbon footprint.

The company is part of several investor coalitions, including the Net Zero Asset Owner Alliance, the Institutional Investors Group on Climate Change, through which it carries out engagement activities.

Active ownership is a cornerstone of Ilmarinen’s responsible investment strategy. Mursula says: “There are many ways in which we act as active owners. Every year, our portfolio managers have hundreds of meetings with the top management of existing and potential investee companies. We engage on issues of corporate responsibility and, as a secondary step, we can divest if companies do not meet our expectations.”

These results were achieved thanks to a globally diversified portfolio. Ilmarinen allocates around 75% of its assets abroad and about half of the portfolio is invested in listed and private equities. The share of fixed income is around 30%, while real estate and other alternatives take 10% each.

In people terms Ilmarinen is sizeable, with nearly 600 employees. The investment department has nearly 100 staff, half of which are investment professionals, either portfolio managers or analysts. About 55% of the portfolio is managed in-house.

“We try to manage as many assets as possible internally, but we need to consider our available resources as well as the expected returns of the asset classes we invest in. In recent years, we have increased our allocation to private debt, international real estate and hedge funds. We have also added co-investments in private equity and private debt. On balance, the share of externally managed assets has grown,” says Mursula.

“I am fairly happy with the balance of externally versus internally managed asset classes at the moment,” says Mursula. “The driver for us would be significant changes in asset allocation. I am aware that some of our peers have been growing their internal private equity and private debt teams, but I do not see us doing that in the near future.”

However, Ilmarinen does favour an active approach to managing the equity portfolio. Mursula says: “We have been successful at managing our in-house equity portfolio actively, which gives us confidence for the future. We just need to make sure that we keep a high enough tracking error.”

Equities remain the main staple for the company. The CIO argues that after more than a decade of generally benign market conditions, with equities trending higher, it is reasonable to expect lower returns going forward, owing in part to the pressure exercised by sharply rising inflation.

“In this environment, after considering all the negative pressures, one is left with the question, what is the alternative to equities? I believe that the expression ‘there is no alternative’ applies here. Real interest rates are still at a reasonably low level, which means that returns from fixed-income markets going forward are not high enough.

Investors will be holding on to their equity allocations as long as their solvency position gives room for that,” says Mursula. 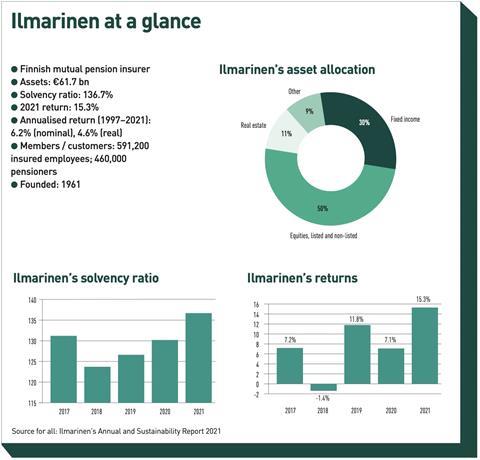 “The other question that European investors may want to ask themselves is, at what level of fixed-income yields will equities start to fall out of favour, now that central banks are tightening? I would say that the US will reach that level before Europe, and that is problematic for euro-based investors because the spread that one would earn by investing in US Treasuries would be significantly eroded by the cost of hedging the currency risk. Therefore the TINA argument is still valid.”

“As equity investors we need to dig deeper to find the right ingredients of our portfolio, to make sure it is resilient to the challenges it will face over the next few years. Companies with strong balance sheets and a transparent dividend flow will become more valuable, in contrast to those that have promised cashflows but never delivered, as some tech high-flying tech companies have been doing,” Mursula adds.

The outcome of the war in Ukraine is far from clear, but Mursula agrees with the widespread view that the conflict could push inflation even higher. This would have further implications for the entire European economy, for instance if Germany’s GDP were negatively affected by higher energy prices.

As far as Ilmarinen’s exposure to Russia is concerned, it was about 0.2% of assets at the start of the war and consisted of Russian government bonds. The company has signalled that will not make any further investments into Russia and that it will sell the existing ones as soon as market conditions allow. “I do not see Russia being an investable market for the foreseeable future,” says the CIO.

Aside from the asset allocation questions, the sharp rise in inflation brings management challenges. Many of the portfolio managers and analysts employed by Ilmarinen, and countless other institutional investors around the world, have never experienced such high levels of inflation during their working lives.

He says: “To deal with that potential problem, we are spending a lot of time analysing the historical data going back many years. We know that history very seldom repeats itself but have been looking at how long the bearish mood lasts during periods of high inflation. In my view, that is a good way to keep ourselves focused.

At the same time, the company is leveraging its ability to build and adapt to multiple scenarios, says Mursula. “We need to build our operations around different kinds of scenarios. That means being ready for a very bearish high-inflation scenario but also for a more positive scenario where inflation is kept under control, GDP growth remains positive and companies continue to deliver earnings growth.