On the record: APG - A rethink is needed

The silver lining of the cloud that COVID-19 represents for the European economy is that, so far, we are being spared a financial meltdown. This is due to the good work of both the European Central Bank, which has prevented tensions in the bond markets and a credit crunch. 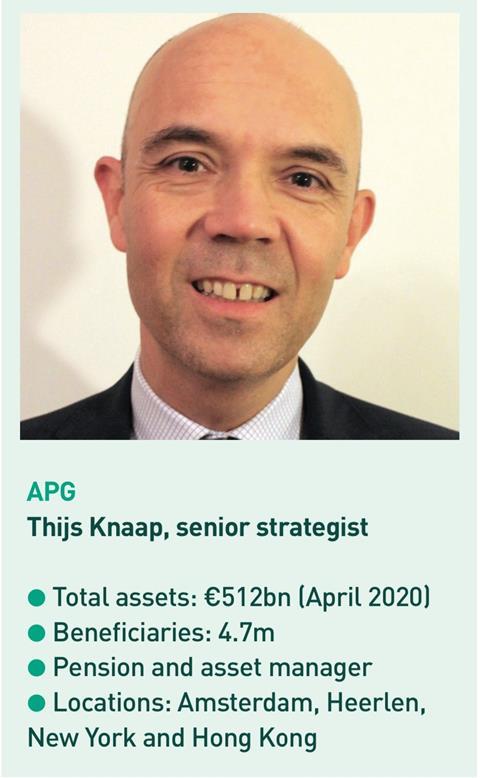 At APG, our first concern is to avoid a second euro crisis like the one we had in 2011. The ECB is achieving that through its bond-buying programmes and we would never speak ill of that. However, having only the central bank addressing the crisis at the moment is clearly not our preferred route, because lower interest rates directly worsen our clients’ balance sheets. With the 30-year swap rate turning negative, rates are now at ridiculous levels. Investors are effectively providing governments with a deposit account. It means that if we plan to pay pensions in 2050, we have to have the money now, plus a small extra. This goes against what we were set up to do, which is to slowly but surely multiply the assets that people put into their pension schemes.

We recognise that if the ECB stopped what they are doing at the moment, a crisis would follow and our problems would be much bigger. However, we would prefer solutions that somehow combine strong growth in all of Europe with a normalisation of monetary policy. This solution has to come from the EU, and although it seems as though the right initial steps are being taken, we still have far to go.

For now, our long-term view on the European economy is that growth will continue to be low and that interest rates will stay at historically low levels for quite some time. Until recently, our central case was that inflation would hit the ECB’s 2% target, and few shared that view. Now our view has changed, and this is partly based on discussions with ECB representatives. It seems that the bank may be out of ammunition when it comes to inflation and may be looking for a way to retreat gracefully, rather than keep fighting to get to 2%. There is a possibility that they will lower the inflation target or choose to target a range.

Despite the rising tensions, we believe the risk of a EU-breakup scenario is low. We see strong commitment by each member country. Nevertheless, a breakup is a scary prospect. That, and the weak economic prospects, is why we see stronger growth and returns for our investments outside Europe.

Thus, our investments are generally trending towards other areas, particularly Asia and the United States. We are also growing our domestic asset base, by investing more in our home country. In both areas, we are generally looking for risk reduction and higher returns. Through some of our investments in the Netherlands, we are also actively participating in the transition towards a greener economy, with a focus on energy generation.

In Europe, the common wisdom on what constitutes a sustainable level of government debt is changing. We have, of course, looked at what will happen to Italian government debt when it grows by 20 percentage points. It seems to us that it will be eminently sustainable, given our other economic assumptions, which include low interest rates thanks to the ECB’s policy. That is comforting, but Europe needs strong, widespread growth if it wants to remain relevant for investors.

One of the positive effects of the crisis is that many policies that used to be taboo have suddenly become possible solutions. As an example, for years pension funds have been clamouring for safe government assets, and finally Germany is looking to issue more bonds.

Generally speaking, crises can often incentivise positive change. In this case, governments are forced to spend and this may be a catalyst to invest in programmes that boost productivity.

However, we are agnostic in terms of the EU’s ability to bring about structural improvements. The EU is probably going to make sure it does enough so as not to fall apart, but it is unlikely to stimulate growth beyond what is needed to survive this crisis. There seems to be too much political resistance within each country for any policy that would significantly revitalise the economy.

It is too early to say to what extent the changes brought about by the response to the pandemic will stick. At APG, we used to see cities as a driving force for growth, because they are the centres of human interaction. Now that view may be changing.

The internet may deliver on some of its early promises, such as the fact that it does not matter where one lives, because the world wide web brings the whole world together. We do not know whether this will lead to a much-needed productivity boost. But we can see that a re-think of strategies that focus on asset classes such as infrastructure and real estate is needed. Fortunately, our real assets portfolio is quite diversified.

Any prediction about the future is highly uncertain at this point. However, we stand by our decision to diversify our portfolio globally, which has clearly paid off. The COVID-19 pandemic has hit most countries but each has responded in a different way.