Ronald Heijn (pictured), and Maarten Thomassen of the Netherland’s Pensioenfonds Openbare Apothekers tell Tjibbe Hoekstra about the impact of the Dutch pension reform on their fund 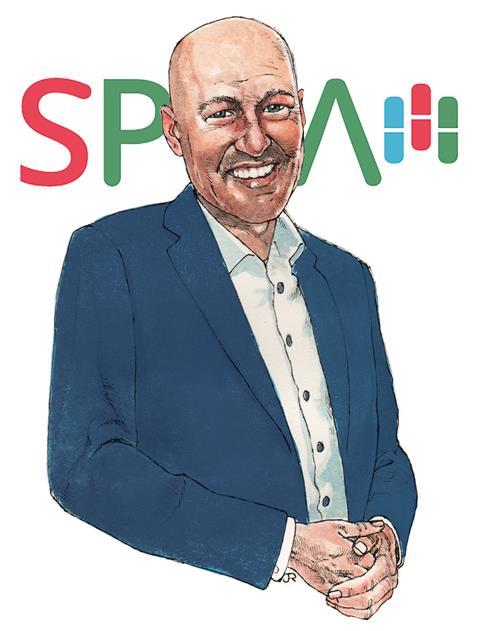 Back in March, Pensioenfonds Openbare Apothekers was the first pension fund in the Netherlands to announce a preliminary choice for the so-called flexible arrangement. Under this variant in the new DC-based pension system, participants will have personal pension pots and the option to choose their own risk profile. The switch to individual DC with some collective features, which the pension fund for pharmacists intends to implement as of 1 January 2024, has potentially significant implications for the fund’s investment strategy.

In anticipation of the transition to the new pension contract, Apothekers has frozen its investment strategy for the time being, says Ronald Heijn, a trustee at the fund and the chairman of its investment committee. “If you want to make a speedy transition, you need to free up capacity for this. As a result, we have decided to halt all other internal developments as much as possible. This also concerns our investment policy, which we have frozen until the transition is completed,” Heijn says.

“Any changes to the investment mix would be implemented according to the current investment policy, and as such have an investment horizon of less than two years,” says Maarten Thomassen, who advises Apothekers on its investment policy on behalf of Aon. He adds: “Even if you expect a change to turn out profitable, you’re not likely to earn back the associated costs in such a short time span.”

An additional reason not to make any changes to the asset allocation now is the fund’s expectation that the investment mix will be revamped after the transition to DC. “We can increase risk in the new system because we no longer have to protect our funding ratio. As a result, we will have more freedom to design our matching portfolio by, for example, including additional inflation hedges,” says Thomassen.

The allocation to equities, which currently stands at 25% of the fund’s €2bn worth of assets, is also expected to increase. Heijn says: “Members have indicated in surveys in the past that they would like to increase risk. This year we also ran a risk appetite survey among our members and we expect the results of this soon. On the basis of these, we can proceed to design the lifecycles, which our members will be able to choose from in the new pension system,” says Heijn. The concepts of the lifecycles will be voted on by members of the pension fund’s professional association in June.

Apothekers is one of several professional pension funds in the Netherlands. For this type of scheme, the members collectively decide on which arrangement to choose in the new pension system. Whereas the funds for shipping pilots, Loodsen, and the fund for medical specialists, SPMS, decided earlier for the solidarity-based arrangement with more collective features, the members of Apothekers’ professional association have voiced a preference for the flexible arrangement. In contrast, for sector-wide schemes such as ABP and PFZW, social partners decide whether to make the transition to the new pension system. They also choose the type of DC arrangement, flexible or solidarity-based, under the new system.

Apothekers decreased its interest rate hedge from 42% to 32% at the start of this year anticipating a further increase in interest rates. “The scenarios emanating from our most recent ALM study in December last year indeed suggested interest rates were going to rise further. Decreasing your interest rate then is the best way to increase your funding ratio,” says Ronald Heijn, chairman of the investment committee. “That’s why we decided to use our limited risk budget to this end.” The decision contributed to the rise of the fund’s funding ratio from 104.1% at the start of the year to 108.6% at the end of March.

Heijn and Thomassen note that the diverse make-up of the fund’s membership makes the flexible arrangement a natural fit for Apothekers. “Our older members and pensioners work or tended to work as self-employed and have amassed considerable pension capital,” says Heijn. “The average pension pot of the current pensioners is about €800,000 to €900,000,” he adds.

“We can increase risk in the new system because we no longer have to protect our funding ratio… we will have more freedom to design our matching portfolio by, for example, including additional inflation hedges” 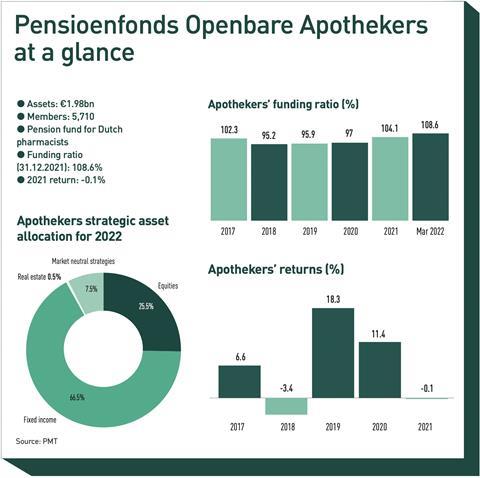 Younger members, on the other hand, tend to work on contracts and have lower incomes. “These younger pharmacists also indicated a preference for green and sustainable investments. If they also wanted to take less risk, it’s possible to design a specific separate investment policy tailored to their demands,” says Heijn. Under the solidarity arrangement, all pension assets continue to be managed collectively and, as such, make an arrangement like this impossible. “The flexible arrangement, on the other hand, gives us the opportunity to offer different investment propositions that reflect the heterogeneity of our membership,” he concludes.

Flexibility is also in the interest of the older members, says Heijn, as many pensioners want to continue to invest in equities after pension age. He adds: “They have a relatively higher preference for risk compared with the average pensioner. This is partly because they are not just dependent on their pension for their retirement income, but also have savings or additional assets such as real estate. This opens up an opportunity for the fund to invest more in illiquid assets too – such as mortgages or private credit.”

Currently, Apothekers has a limited exposure to alternatives and all the fund’s assets have daily liquidity. Its alternatives portfolio consists of a mandate of 31 hedge funds managed by BlackRock. “This mandate spans a wide array of hedge funds strategies, from relative value to low volatility, and has a low correlation with equity markets,” according to Heijn. The mandate’s target return is 4% per year, with a targeted volatility of between 4% and 5%.

While the pension fund’s members have a clear preference for the more individual variant of the two contract types of the Dutch pension reform, they also attach importance to retaining several collective elements, according to Heijn. As a result, the obligation for sector schemes and professional funds that opt for the flexible contract to include a so-called ‘risk-sharing buffer’ in their pension arrangement, which was added to the latest draft of the new pension law, is not a problem for Apothekers. It is not yet clear, however, what form the risk-sharing buffer will eventually take.

Like most Dutch pension funds, Apothekers invests mostly passively in equities. Apothekers switched its passive equity mandate from Dutch asset manager Actiam to BlackRock last year due to “continuity risk” at the former, according to Heijn. “Our own risk assessment suggested Actiam did not have a future as an independent firm. We could see that looking at things like profitability trends, staff turnover and the limited asset growth,” he adds. At that time, Apothekers had invested more than 15% of its assets with Actiam.

Heijn continues: “We knew something was going to happen to the firm, but we didn’t want to wait, as we deemed the continuity risk too high. So then we proceeded to look how we could switch to another provider at the lowest possible cost.”

Eventually, BlackRock was selected as the new manager for the mandate. According to Heijn, the switch from Actiam, which was acquired by Cardano in October last year, also resulted in a modest management fee cut of 1.2bps.

All this means pension funds will, in principle, have more freedom to design their investment strategy as they see fit, not least because a large proportion of pension funds, including Pensioenfonds Openbare Apothekers, are currently in ‘recovery’. This means their funding levels are below the minimum required by pension regulator De Nederlandsche Bank (DNB). As a result, the maximum amount of risk many pension funds can take is currently limited.

Some pension funds will undoubtedly take the opportunity to increase risk once regulatory restrictions end. However, the relaxation of financial regulation is replaced by a new obligation: under the new rules, funds are required to first measure the risk appetite of their members, and to design their asset allocation and investment strategy accordingly. In other words, pension funds can increase risk after the pension transition, but whether they do is up to their members.

The only actively managed part of Apothekers’ equity portfolio is a €120m European equity mandate with Acadian. Since last year, part of this portfolio is being invested in companies that show strong improvement on ESG criteria.

“We agreed with Acadian to have at least a 10% overweight to this type of company compared to the benchmark. For example, investments in renewable energy companies have to be 10% higher than the benchmark exposure,” says Heijn. Acadian will also reduce the CO2 intensity of its portfolio by 50%.

Apothekers’ bond portfolio is managed entirely actively. The fixed-income mandate is shared equally between BlackRock and Pimco. “We have opted for two managers with different styles for diversification purposes. Pimco is more of a top-down macro manager that’s ready to make strong calls, while BlackRock is more of a relative-value manager staying close to the benchmark,” says Heijn, who has taken heed of the fact that Pimco has performed considerably better than BlackRock over the years. This has prompted the question with the fund’s board to perhaps change the fixed-income allocation in favour of the former. “But this question will only come to the table after the pension transition.”