Pension funds on the record: how they manage LDI

Pension funds reflect on the role of LDI in their portfolios and the risks associated with an unlikely, but not impossible, sudden rise in interest rates

The benefits of internal management 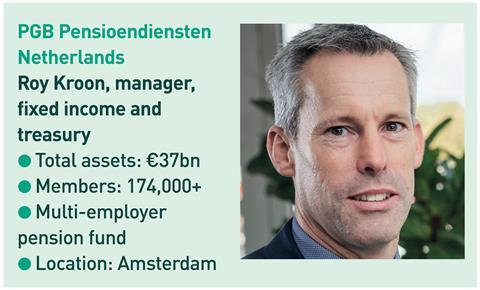 PGB’s €10bn liability-driven investment portfolio is internally-managed, which provides advantages in terms of both cost and implementation. While the cost argument may speak for itself, implementation-wise PGB can manage the matching portfolio in the most flexible way, using all available instruments, following a dynamic hedging policy and taking advantage of movements in swap spreads. Furthermore, when the board wishes to amend the strategy to adapt to a certain market scenario, the changes in implementation can be executed swiftly without negotiation of mandates.

The portfolio consists of interest-rate swaps (IRS) of up to 50 years, which account for at least half of the interest rate coverage, as well as government bonds issued by the Netherlands and Germany, IG credit, a Dutch residential mortgage portfolio and smaller amount of interest rate futures and AAA-rated agency bonds. Because PGB is an open DB scheme, the portfolio hedges interest rate risk and credit risk but it does not perform cashflow matching. This might change somewhat when the new Dutch pension contracts come into force from 2025.

PGB’s policy is to deliver the optimal risk / return in the longer term. We accept that hedging results may differ in the medium term due to swap spread movements and the illiquid nature of mortgages. The dynamic hedging policy allows us to amend the hedging level according to the level of interest rates based on a pre-established framework. Since we believe it is better to take small profits more often, rather than more lumpy trades less frequently, transactions can occur frequently when interest rates are volatile. For this dynamic hedging, we focus on the most liquid instruments. The credit part of the portfolio is managed in a semi-passive, buy-and-hold type of strategy, optimising for duration and spread positioning.

In case of a sharp rise in interest rates, PGB would be faced with considerable collateral obligations, mainly on the IRS positions, but potentially also from other sources, such as higher initial margin and FX contracts. PGB has a liquidity policy, which consists of monitoring the daily liquidity needs in a shock scenario. The policy sets out which types of collateral can be made available in which time frame. Under this policy, PGB has ample liquidity and collateral positions. Furthermore, PGB owns several repo lines under which cash can be made available very quickly if needed. In a worst case scenario, listed equities will need to be sold and exposures replaced by futures. We believe we will stay liquid under basically all thinkable scenarios. 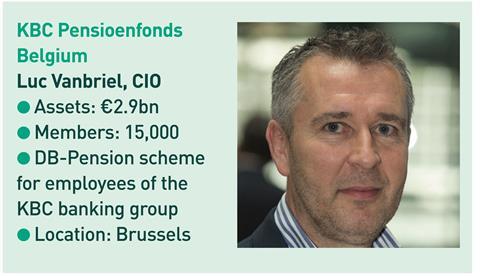 Pensioenfonds KBC introduced LDI in 2007 to protect against falling real interests and rising inflation. Since the beginning, we have been using a diversified pool of bonds with an average S&P credit rating of at least A+. The coupons of these predominantly nominal bonds are swapped against a short-term floating rate plus a spread. This floating rate is swapped against a fixed long-term nominal or inflation-linked payment with more or less the same maturity as our defined benefit liabilities. In order to maintain enough budget to invest in risky assets, the leverage has always been higher than 175% but never above 225%, as this cap limits the impact of an inverse yield curve or other unexpected consequences.

These LDI investments are wrapped in an institutional UCI (undertaking for collective investment) structure. As a result, the collateral agreements and calls are executed by the manager of the UCI. The collateral agreements allow us to post government and covered bonds. There are enough eligible bonds in the pool to post collateral. It would take an additional 3-5% yield increase before the manager would have to sell corporate bonds or decrease the swap notional values. Pensioenfonds KBC could, however, always decide to invest additional money in the LDI and, as a result, the manager of the LDI would not have to sell anything. It is worthwhile mentioning as well that the value of the floating-for-fixed swap evolves opposite to the value of the fixed-for-floating swap, resulting in a compensating effect.

Furthermore, in 2017 Pensioenfonds KBC implemented a dynamic LDI approach, meaning that the portion of matching assets would be increased if the real interest rate increases. This year, a second parameter has been added – the evolution of the funding ratio. A higher funding ratio implies more hedging, although the leverage would always remain below 200%. These triggers will not automatically lead to a change of the hedge ratio. The board of Pensioenfonds KBC decides before trades are being implemented. The overall framework is obviously documented in the statement of investment principles (SIP). This SIP is approved by the board and ratified by the general assembly. The prospectus of the UCI and the discretionary management agreement with the asset manager describe the investment philosophy and the risk frame of the LDI. 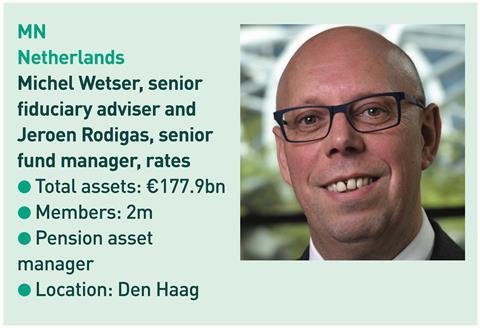 In addition, we regularly execute stress tests to make sure our clients are not exposed to too much risk in certain scenarios, such as what happened recently in the UK.

There are some important differences between UK and Dutch LDI mandates. Dutch LDI mandates operate on a euro market where the underlying economy and market is significantly larger. Within the euro bond market, there is a diversification between governments, executing different policies, and centrally monitored by EC and ECB.

The pension system in the Netherlands is similar to the UK system, but its financial markets are more correlated with those of the other European countries. This means different supply and demand dynamics. In general, in our analysis, the amount of leverage within Dutch pension funds, at one to one-and-a-half times, is significantly lower than in UK counterparts, where leverage in LDI portfolios can be as high as four times.