Is the term ‘emerging markets’ past its sell-by date? There are both analytical and practical reasons to take this question seriously. For a start, emerging markets (EMs) account for a rapidly increasing share of global output. It is becoming increasingly difficult to treat them as fringe assets at the margins of any investment portfolio. In addition, the framework determining EM indices is inconsistent across different asset classes and index providers.

China provides perhaps the clearest challenge to the established framework. If Chinese equities are considered at their full weightings they account for 40% or more of the EM universe. That means general emerging markets investors could find themselves more heavily weighted towards Chinese equities than they realise.

Zhen Wei, MSCI’s head of China research, says the largest emerging markets raise questions about both asset allocation and portfolio implementation approaches. That also applies to EM debt, with China’s domestic market already ranked the third-largest in the world. Behind China lies India with an economy that is finally growing fast enough to justify the hope that it may also be significant enough to distort EM indices in the foreseeable future.

In contrast, index giant FTSE Russell is in favour of retaining the existing categories. Joti Rana, head of governance and policy, Americas, says: “We still have significant assets (€125bn) tracking our EM indexes; investors still want to distinguish between markets.” He maintains there is still a need for different investment ‘buckets’, depending on the investor’s risk/return profile.

The term ‘emerging markets’ was invented by the International Finance Corporation (IFC), the investment arm of the World Bank, in 1981. The goal was to create an index of investable stock markets in what was then generally called the ‘third world’ (with the developed countries being the first world and the Soviet bloc, the second world).

The two distinguishing factors back then were income per head and accessible stock markets. Those criteria are still relevant to what are now termed frontier markets. FTSE Russell distinguishes these as being less liquid, with shorter stock exchange trading hours with a less-developed capital markets infrastructure and less-robust shareholder protection rights.

They are more prone to experiencing fluctuations and shortages in foreign exchange and hence more likely to introduce some level of capital controls. Often, they have the potential for rapid economic growth and hence generating higher returns but at the expense of higher risk.

While frontier markets may have a lot in common, the same cannot be said for the emerging markets moniker. This encompasses some wealthy East Asian countries – such as Singapore, South Korea and Taiwan – that are more developed than many countries within the EU. It is not surprising that providers have differed among themselves over the indices in which such countries should be included.

Resource-rich countries such as Qatar can also have high incomes per head but still fall within the EM universe. Sticking to an asset class definition that lumps such disparate investment opportunities within one bucket makes less and less sense. It cannot be business as usual for many more years when it comes to defining asset classes and allocating mandates to fund managers.

Bloomberg has included Chinese bonds into its developed market indices, while FTSE and MSCI still incorporate Chinese equities into their EM indices. “China is the second-largest economy in the world and to have a difference in perspective on whether it should be classified within developed or emerging market indices dependent on the asset class and index provider may seem bizarre,” says Morgan Harting, a portfolio manager at AllianceBernstein.

Investment management mandates are awarded using index benchmarks which can define and constrict the universe of opportunities allowed to a fund manager. As a result, inclusion within an index, whether developed or emerging, is an important catalyst for capital flows, points out Amundi portfolio manager Sergio Strigo. But as there are far more capital flows to developed markets than emerging ones, the latter can benefit from being upgraded to developed. 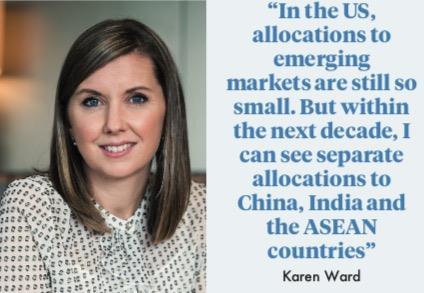 The criteria used to define emerging markets though, will inevitably lead to controversy. Greece is part of the developed market bond indices but has a credit rating lower than Botswana. Greece’s membership of the EU, plus the illiquidity of the Botswana bonds, clearly puts them in separate categories. But while frontier markets such as Botswana can be defined by criteria such as investability, certain countries within the main EM indices are looking increasingly anomalous when compared with most others.

Phillipe Ithurbide, global head of research at Amundi Asset Management, contends that EMs have not been integrated into investment portfolios. Many investors have low and often negligible allocations, without any specific discrimination between countries.

“Advanced countries, the dollar bloc, the euro-zone and the emerging (EM) bloc really should not be considered ‘blocs’,” he says. The emerging markets moniker is unsatisfactory, as it fails to recognise the heterogenous nature of the universe.

Apart from social attributes such as levels of education and urbanisation, countries differ dramatically in terms of key economic criteria. These include the current account balance, commodity production versus consumption, oil production versus imports and levels of indebtedness.

Moreover, as MSCI’s Zhen argues, the size of public equity market does not always accurately represent a country’s relative share in the global economy. “Issues such as the extent that listed companies represent a country’s corporate sector, the extent that shares are free-floating, ownership restrictions, the maturity of the capital market and even relative market valuations could potentially distort the true economic significance of a stock market.”

Karen Ward, EMEA chief market strategist at JP Morgan Asset Management, agrees that treating all EMs as one bucket does not make much sense. However, she says the real problem is getting investors to allocate anything at all to EMs. “In the US, allocations to emerging markets are still so small. But within the next decade, I can see separate allocations to China, India and the ASEAN [Association of Southeast Asian Nations] countries,” she says. That may encourage many institutions to create exposures to those entities in a similar manner to gaining exposure to Japan, while leaving aside the heterogeneous set of smaller countries that would comprise the rest.

“In a world where investors are voluntarily attached to artificial indices it makes my job easier as it creates inefficiencies,” says Harting. Global active managers like him can avoid the artificial distinction between emerging markets and developed. Companies such as Tencent and Alibaba should be compared to the US technology giants, rather than Chinese property companies.