Although emerging markets are in aggregate enjoying structural improvements, there are stark differences between regions

Emerging market debt ratings appear to have been increasing steadily this century, going up two notches in two decades on some measures (see figure). But are there commonalities behind such a disparate group of countries that makes this a real effect and what are the future prospects? The answer appears to be mixed, with some global trends combined with commonalities among specific groups of countries.

Emerging markets as a whole have enjoyed steady improvements since the 1997-98 Asian financial crisis. While the catalysts were specific to each country involved, as Koon Chow, emerging market strategist at Union Bancaire Privée (UBP) argues, the Asian crisis was a big enough shake-up to cause global investors to reassess the risks of all emerging market investments. That led to dramatic outflows and forced changes such as the de-pegging of currencies in Argentina, Brazil and Turkey. Argentina entered a long period of debt renegotiations which did not really conclude till 2016.

“The Asian crisis only really ended in 2002-03 when the last of the dominos outside Asia fell, with Brazil in 1998, Argentina in 2001 and Turkey in 2001,” says Chow, pointing out that the lessons from the crisis were learnt by many countries, not just those in the middle of it. It was seen to be better to have flexible exchange rates rather than fixed; to borrow from local sources of savings in local rather than foreign currency and to borrow for as long a maturity as possible. Short-term, hard-currency borrowing came to be recognised as the ultimate original sin.

Running an export-focused strategy was seen as ideal. This enabled emerging economies to build up buffers, such as foreign exchange reserves, where possible.

From the early 2000s onwards, many countries implemented strategies reflecting those lessons – reducing public spending and hence budget deficits and reducing imports thereby improving the current account. There was also a strong focus on exports by keeping exchange rates low. Capital inflows were used as an opportunity to build up foreign exchange reserves.

Such general improvements were apparent up to 2015 with commensurate rating improvements. “An average rating of 22 emerging markets was BB in 2003 and by 2014 it had risen to almost BBB- for hard currency,” says Chow.

Within the general improvements, though, there are clusters of contrasting behaviours. Indeed, argues Michael Cirami, a director at Eaton Vance, index-rating increases can be misleading as there have been many new entrants to the marketplace replacing lower-rated countries.

Certain groups of countries stand out, for instance Central and Eastern European countries either in the EU or on the path to EU membership, have spreads of a few basis points rather than hundreds.

While the UK may be heading towards Brexit, one way or another, the EU has succeeded in stimulating emerging markets in Europe on a path towards EU membership which has forced them to adopt measures that have also resulted in rating improvements. That, says Cirami, does mean their hard currency debt is not attractive from an investment viewpoint, although local currency debt in countries such as Poland and Hungary can be more dynamic.

The Asian tigers – Singapore, Taiwan and South Korea – are essentially developed economies, while the oil exporters in the Middle East also enjoy credit ratings as strong as those in the developed world. However, non-oil exporters in the Middle East can be at the other extreme with spreads of 1,600-1,700 bps for Lebanon, notes Cirami. Sub-Saharan Africa has also seen a dozen or so new debt issuers with ratings around B and BB. These include Angola, Cameroon, Kenya, Rwanda, Senegal, Tanzania and Zambia.

However, the question for many countries, argues Rob Drijkoningen, co-head of emerging markets debt at Neuberger Berman, is the speeed at which the catch up theme will be played, relative to developed markets. That is related to the questions of whether risk premiums recede and creditworthiness improves.

Chow argues that from 2011 to 2015 many emerging markets, including Turkey, started losing their reforming zeal. “Brazil started getting drunk on higher commodity prices and levered up the economy using local currency, with state development banks offering loans at below market rates to favoured companies, resulting in a misallocation of capital,” he says.

Some countries, such as South Africa, came through the crisis by supporting growth through increased spending but did not cut back when economies recovered. China supported global growth post the crisis but it led to sharp increases in real estate prices, with China now clamping down on leverage in the corporate sector.

Latin American countries such as Argentina, Brazil and Venezuela have been hit by falling commodity prices since 2015. Oil prices, in particular, have fallen as a result of the shale revolution in the US. That also marked the end of super-easy global monetary policy points, with the US Federal Reserve hiking cycle starting in December 2015.

Yet structural reforms are still continuing in some of the most problematic emerging markets. Cathy Hepworth, co-head of EMD at PGIM Fixed Income, points out that Brazil is in the process of implementing reform of its social security and pension system. This move should improve its budget and free resources for investment and more effective social spending.

Ukraine has reduced government corruption and is attempting to implement land reform, which will improve their growth prospects. But there are also examples where structural reforms are stalled or going in the wrong direction. “South Africa continues to struggle with labour market rigidities and a bloated state-run utility, and it is unclear how Mexican market reforms will fare during the current Andrés Obrador presidency,” says Hepworth. 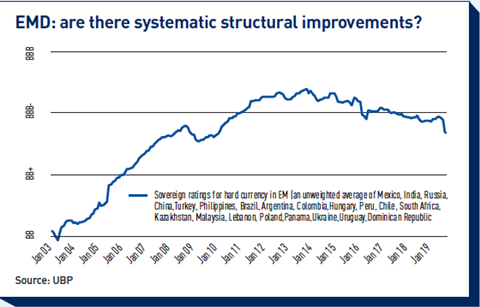 The current environment of slower global growth than that in the last decade will have its ramifications on emerging markets, although the impact is highly variable, both across regions and within them. The room to manoeuvre for emerging markets varies, according to Yerlan Sysdykov, head of EMD at Amundi.

Latin America presents perhaps the greatest challenges, whereas many emerging Asian economies have deficits of less than 5% of GDP. Countries such as Thailand and China can afford to stimulate growth through government spending for some years. Brazil has a debt/GDP ratio of about 80%, perilously close to the 90% debt/GDP threshold that Carmen Reinhart and Kenneth Rogoff famously found can lead to dramatic slowdowns in economic growth.

“Irresponsible policies by President Macri have led to Argentina’s debt/GDP ratio rising to 70% from the figure of 27% when Cristina Fernández de Kirchner left power,” says Sysdykov. He sees prospects for Central and Eastern Europe as lying between the two extremes of Asia and Latin America. Economies are stable as they are linked to the EU and have low leverage, apart from Croatia. The slowdown in the EU will have an impact and countries are constrained in their ability to create debt-financed growth by the Maastricht Treaty requirement to have budget deficits of less than 3% of GDP.

Russia, Ukraine and Turkey, the latter often lumped with Eastern Europe, paint a different picture. Russia is forced to maintain fiscal discipline to provide stability under sanctions, while Turkey under fiscal hawk President Tayyip Erdogan has to maintain discipline because of its troubled banking sector, despite a debt/GDP ratio of only 40%.

“South Africa continues to struggle with labour market rigidities and a bloated state-run utility, and it is unclear how Mexican market reforms will fare during the current Andrés Obrador presidency” - Cathy Hepworth

Sub-Saharan Africa also has contrasting prospects. Sysdykov  says: “Although all recent borrowers started off with debt balances close to zero. Countries such as Angola, Zambia and Mozambique misused the funds raised and now struggle in contrast to well-managed examples such as Ethiopia.”

What is clear is that because the number of countries facing a negative outlook is double those with a positive prospect, with most of the negative ones being in Latin America, investors are seeing an asset class whose credit quality is deteriorating. Yet with 30% of all investment-grade securities globally having negative yields, that may provide an opportunity in the search for yield.