1
Hedge Funds - Technology: The next generation

The next generation of hedge funds may have to devise new approaches, rather than provide rehashes of old ones, if they are to gain any traction. Figures from Hedge Fund Research (HFR), a data and analysis provider, show hedge fund launches reached an 18-year low in 2018. Competition from exchange-traded funds (ETFs) and cheap factor investing approaches is squeezing support for many hedge fund offerings.

But hedge funds, for all their faults, have often been at the forefront of innovation. The industry is being disrupted by revolutionary technologies that have already reshaped businesses around the world, from international shipping to online shopping.

Chief among these new technologies, says Tom Kehoe, global head of research at the Alternative Investment Management Association (AIMA), are those that fall under the umbrella of advanced quantitative techniques and artificial intelligence (AI). In a recent AIMA paper on the future of the hedge fund industry Kehoe argues: “Hedge fund principals see a time when trying to compete without machine-learning capabilities will be akin to trying to compete without a Bloomberg terminal.” The make-up of new hedge fund employees is also changing as a result, moving away from finance and banking to data science, according to AIMA.

On the face of it, the future possibilities appear boundless. New ideas such as the utilisation of AI, big data, cheap and widely available computing hardware, as well as open source software, all offer promise. Yet they have so far failed to create a wave of innovation in the hedge fund industry, judging by the paucity of new launches.

The most obvious long-term opportunity is in big data. Some 90% of the world’s data only became available in the past two years, Kehoe believes.

“There is a lot more data being collected by all sorts of people and being made available to the investment industry,” says Christopher Reeve, director of risk at Aspect Capital. As a result, there is now a plethora of data-processing firms, data vendors and even companies that have sprung up as data brokers – intermediaries who put investment institutions in touch with entities that have data sets that hedge funds might find useful for investing.

Trying to get better forecasts of economic data releases such as GDP and inflation before the official figures come out can be useful, as they affect asset prices. Aspect also uses sentiment data to try and understand sentiment to use that as an input. Data providers can aggregate published text from newspapers and so on, and run language-processing algorithms to quantify sentiment: “We take that data and our processing skills to turn it into an actual trading strategy,” Reeve says.

The popularity of this type of data analysis means that, as Tom Hill, chairman of Blackstone Alternative Asset Management, says: “There’s an arms race around how asset management firms collect data and how they slice and dice it.” He adds that datasets purchased from third parties can degrade quickly, so some funds are creating proprietary datasets that include everything from utilising cargo ship transporter data to monitor commodity flows, to using cell phone data to monitor retail foot traffic.

But raw data, particularly large volume data, needs intelligent processing to extract any useful information. What has changed in recent years, has been the widespread availability of the tools to do that. The AI tools themselves are not new; they have been around for a decade in terms of the algorithms and so on being used.

What has changed, says Reeve, is the processing power available to analyse huge amounts of data. That has started to make these approaches more accessible and relevant if used correctly.

Another significant change that Reeve sees is the growth of open source software, which means that small firms do not have to start from scratch when building an AI engine or technique to crunch data. That creates new opportunities for data analysis. Professor Campbell Harvey, an investment strategy adviser for MAN Group, gives the example of a discretionary hedge fund firm looking to invest in a retail company that could use machine learning to analyse satellite imagery and determine whether there are people lining up in front of its store locations. “Alternatively, a systematic hedge fund firm using algorithms to trade could use machine learning to collate data on the use of credit cards at every retail company in the United States, and subsequently feed that information into its trading algorithms,” he says.

The question for Harvey, is not whether hedge fund firms will use such technology, but whether the data is used to aid human decision-making or, instead, to serve as inputs for an algorithm which can then make a trade.

Science and behaviour
The availability of big data and advanced computing capabilities though, is not without limitations. Successful examples of AI outside finance have been in areas of image recognition where AI techniques have proved to be exceptionally effective in medicine. That success is based on the ability to train algorithms using vast sets of historical data. The laws of science are immutable, so data sets can be continuously expanded with time, enabling algorithms to be trained to be ever more precise.

Financial markets, however, are ultimately the representation of mass human behaviour, and that cannot be described with immutable laws of economic and financial theory. AI works well with financial markets when the environment is stationary, in which case it can be a powerful technique, says Reeve. But financial markets are continuously evolving, so that any data being analysed only has a limited applicability.

“A systematic hedge fund firm using algorithms to trade could use machine learning to collate data on the use of credit cards at every retail company in the United States, and subsequently feed that information into its trading algorithms” - Professor Campbell Harvey

That problem is exacerbated by the fact that while there are a lot of data sources, there is not that much data available on the sorts of time frames that are used for trading. “There are only two decades of prices data for most of the markets we trade – some may go back a few more decades, but if you are looking at daily price data, there is not that much compared to the amounts that are used for training data in other recent successful applications of  AI algorithms,” Reeve says.

What that means is that any analysis suffers from a large amount of noise – that is, irrelevant signals accompanying any actual signal. The objective of any analysis is to maximise the signal-to-noise ratio in any analysis, which requires as much data as possible that reflects a stationary environment. As a result, AI approaches are likely to favour short-term high-frequency trading strategies that produce huge amounts of data in a relatively stable economic environment over the time frame of the data sets. 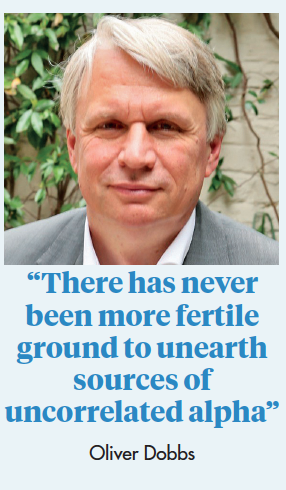 As Kehoe points out, the complexity of financial markets data means that, for the foreseeable future, AI will not be able to make accurate long-term financial predictions. As such, AI will not usurp the integral role of humans in the investment world. Where it is particularly valuable is in picking up non-linear relationships between markets. Aspect for example, has ‘machine learnt’ algorithms that take traditional simple inputs such as price data for all the liquid futures markets that it is trading to determine complex relationships between them.

“One of the challenges in doing this is making sure that you are able to understand or explain what the machines are trying to do,” says Reeve. Their predictive power lies over a time frame of months, with the models themselves being updated and retrained every couple of months.

Specialised systematic hedge fund firms operating in the short-term sphere – where there is the greatest demand for more sophisticated artificial intelligence capabilities – will need to invest heavily in the more advanced types of machine learning if they are to survive and compete, says Kehoe. But, as he points out, machine learning will not just affect a certain type of hedge fund firm; it will affect the entire industry.

Perhaps the biggest new challengers in the hedge fund industry will come from tie-ups between large social media companies and IT firms, such as IBM, and innovative hedge fund teams. The ideas of the latter can be backed by the resources, computing capability and, in many cases, actual data sets of the social media giants.

Where does this leave traditional firms? All might not be lost, though. Oliver Dobbs, CIO of Credere Capital, a London-based hedge fund, argues that “the rise of the machines” combined with the decline of investment banking trading, has led to an unprecedented level of event-driven opportunities. He says the prevalence and growth of algorithmic trading across the globe is creating fresh inefficiencies across asset markets. “From mispricing around new capital raises to regulatory change, shareholder buy-backs, security issuance and capital restructuring, there has never been more fertile ground to unearth sources of uncorrelated alpha,” he says.

For institutional investors, though, the problem as always with hedge funds, is differentiating those strategies able to generate true alpha signals from those that are just generating noise.