Mezzanine lenders stepped into the breach during the darkest days of the credit crunch, and were paid handsomely for their trouble. Jennifer Bollen finds them returning to their customary niche of tricky smaller deals

As tumbleweeds rolled across the European leveraged finance markets immediately following the financial crisis, buyouts all but vanished. The senior debt that traditionally financed acquisitions dried up, leaving a hole in transaction finance. In stepped mezzanine – a junior tranche of debt that came at a higher premium in exchange for greater risk for the lender. It soon became a crucial instrument for companies that struggled to secure traditional financing.

In 2006, European mezzanine issuance stood at €7.4bn – 11% of the total value of senior debt issued in the region that year, according to Debtwire Analytics. In 2008, as the financial crisis severely impacted senior debt issuance, mezzanine issuance stood at €2.9bn, or 21% of the value of senior issuance. Mezzanine remained relatively strong in 2009, when €544m of issuance equalled 17% of senior.

Since then, the picture has changed dramatically. In 2010, mezzanine fell to €138m, or just over 1% of the value of senior issuance. Senior debt providers have returned to underwriting large loans, while ‘unitranche’ – a single, combined tranche of senior and subordinated debt – has replaced much mezzanine. By 2014, mezzanine issuance stood at €185m, or 0.4% of senior, which had ballooned to €42bn, its highest annual total since lenders issued €71bn in 2007. Meanwhile, unitranche stood at €215m, compared with €655m in 2013.

“In the mid-market, outside of difficult credits or very small, quirky deals, mezzanine has been squeezed out by unitranche,” says Jonathan Guise, a partner at debt advisory firm Marlborough Partners. “Senior lenders in the mid-market have become more competitive themselves to respond to the threat of unitranche.”

“In a lot of ways, it is less and less common because people are getting the leverage they are asking for through the unitranche product,” he explains. “In the large-cap market, arguably, people are doing mezzanine, they are just calling it second lien. Your second-lien structure, the most recent ones, behaves like mezzanine – only it is cash-pay only and cheaper.”

“What has changed is there are not really that many dedicated mezzanine players anymore,” says Guise. “They have all seen the writing on the wall and adapted their investment strategy accordingly.” 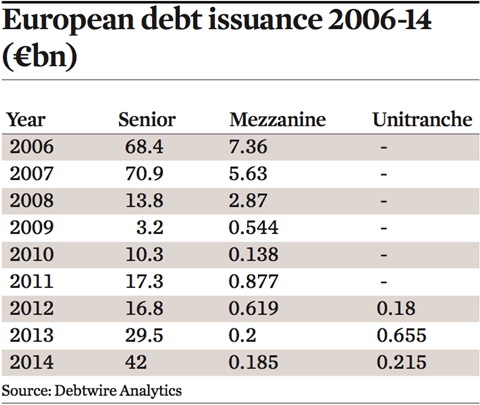 Simplicity is unitranche’s biggest attraction, according to Guise, who says the cost of unitranche often works out about the same as mezzanine. “[You are] dealing with one party or for large deals maybe two parties – it is quicker and easier to execute and the funds have greater structural flexibility.”

Unitranche debt typically involves more than one lender but the entire debt package is offered on the same terms with a blended cost and the loan balance amortises on the same schedule. The growing competition from the unitranche market has forced traditional bank lenders to offer more attractive terms, further squeezing out mezzanine providers.

However, mezzanine still plays an important role, says Paul Shea, co-founder of debt and equity provider Beechbrook Capital, who highlights that senior and unitranche have come to dominate the upper mid-market to large buyout market but not smaller deals.

“In the lower mid-market – enterprise values of €10m-100m – we are still seeing strong demand for mezzanine because small to medium-sized enterprises can raise some bank debt but not always sufficient for their needs, and some private-equity sponsors are constrained by the size of their fund and the amount they can invest in one business,” he explains. “This creates a financing gap which is not relevant for every deal, but there are a decent number of opportunities.”

The risk profile of mezzanine remains relatively unchanged despite the drop in demand, says Ashurst’s McDougall, while the cost appears to have increased. “I expect the handful of credits which use mezzanine are relying on it and the mezzanine investors are not willing to upset their risk/return in order to win the deal.”

McDougall adds that the typical mezzanine structure of roughly half cash coupon, half payment-in-kind portion has also largely stayed the same, although he said there were so few mezzanine deals it was difficult to determine distinct trends. Shea agrees that the typical mezzanine structure has remained steady, although all of Beechbrook’s deals also include an equity co-investment designed to take advantage of any upside – a feature less common in the upper mid-market.

While mezzanine structures have not become any more risky, the level of gearing on mezzanine tranches has increased as leverage has across the market, varying depending on the strength of the credit, deal size, geography and market conditions. A good-quality mid-market company could be levered at about 3.5 to 4.0 times EBITDA in the senior tranche, plus 1 times EBITDA in the mezzanine layer – although McDougall highlights that larger deals with higher and more reliable cash flows can take mezzanine gearing of 5.5 or even 6 times.

After a wonderful hour in the sun during 2008-09, when mezzanine was briefly the only structure that could bring a lot of lenders and borrowers together, the return of senior is pushing it back into its customary niche. Investors will reflect that it was good while it lasted – and that the return to normality signals the healing of both the economy and its credit system.