IPE Conference: Political risk in Europe ‘on the decline for first time’

With threats from the outside increasing, Europe will actually move together more closely, delegates at the 2017 IPE Conference in Prague heard.

“Political risk in Europe in general is on the decline for the first time,” said Giuseppe di Mino, managing director at hedge fund Amber Capital.

“After the French election, Brexit and Trump, there is a sense that for the first time Europe needs to integrate, get together, defend itself.

“The hope is that when a German government is formed eventually, next year the French-German coalition will rekindle the willingness to move forward.”

Di Mino was speaking on a panel on niche investments in Europe including central and eastern European (CEE) countries, Greece and Iceland.

Asked about whether there was a higher political risk in these regions, the panel disagreed.

“Perhaps there is some risk in Hungary or Poland, but there is also some in Italy, France, Spain and Germany – at least a little bit. Political risk cannot be reduced to CEE,” said Friedrich Mostböck, head of group research at Austria’s Erste Group Bank.

He also emphasised that CEE countries had a much lower level of debt compared to the euro-zone.

“The debt crisis is still global and not solved and includes not only the euro-zone but also large industrial states like the US or the UK,” Mostböck said. “On a positive note, most of CEE countries have – in relative terms – a much lower debt than the rest of the world.”

He added that virtually all European debt levels were above the Maastricht threshold for the euro-zone, “but these criteria are gone, they are not important any more”.

Jared Carney, founder and CEO of Lightdale, an asset management boutique focusing on European niche opportunities, admitted: “I’m not one to talk as the US has increased its political risk significantly.”

But he added: “Europe is an exciting place to invest, not just on an index basis but also in specialised situations – but it is a very local market, especially for an American looking in.”

As a specialist for Russia, Tim Umberger, deputy head of eastern Europe and portfolio at East Capital, provided a glimmer of hope for investors in that market.

“What people are missing is that we have elections in 2018 and a reshuffling of the government is possible,” he said. Umberger also mentioned the rise of technocrats who might get to power, which would be “positive for Russia”.

He also noted: “International relations cannot get much worse, but on the flip side Russia has good relations with other important countries like China, India and Japan.”

Talking about other markets neglected by investors, Di Mino noted “a lot of direct lending opportunities” in Greece as companies were trying to refinance and banks have been unable to help.

In addition, he mentioned distressed assets from banks’ balance sheets and privatisation initiatives happening in an economy that is “just coming out of the deepest recession since World War II”.

Some investors have already made the first move, he said.

“What we see on the ground is that for the first time ever in the last seven years [foreign direct investments] are increasing, mainly from Asia and the east,” Di Mino said. “If you are looking for a distressed country with good opportunities to invest in, Greece is one of them.”

Similarly, Mostböck added that the CEE region was “a perfect place for niche investment opportunities as the growth is now generated on a much more solid level and governance also continues to increase”.

The analyst was convinced that the financial crisis actually helped this effect, to a certain extent.

“The CEE countries did their homework, reduced the debt levels, increased foreign exchange reserves,” Mostböck said. “Otherwise, the double-digit growth levels we saw before would have created a bubble in the region.” 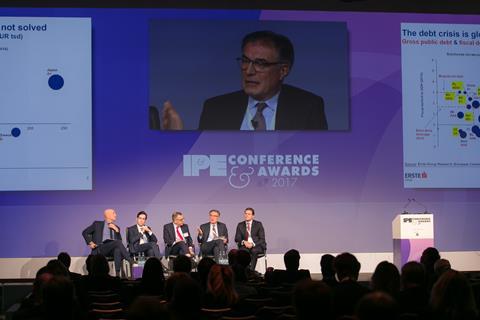 The panel discussed niche investment opportunities in Europe and beyond