2
IPE Conference: The intertwined future of retirement and investment

IPE Conference: The intertwined future of retirement and investment

The future of the asset management industry is intertwined with the future design of pension systems, delegates at IPE’s annual conference in Dublin heard.

Steve Utkus, principal and director at the Vanguard Center for Investor Research, said the growth of outcomes-based investing and the attention being paid to fees were coming from the retirement system.

The private pension market had been a leader in driving down fees, with regulators intent on lowering margins, according to Utkus.

“The framework of regulators around the world,” he said, “is [for] more of that premia to end up in the account of the member and less in the distributors’ hand.”

Only 10% of global asset management revenues were tied to outcome-oriented offerings, Urwin said. 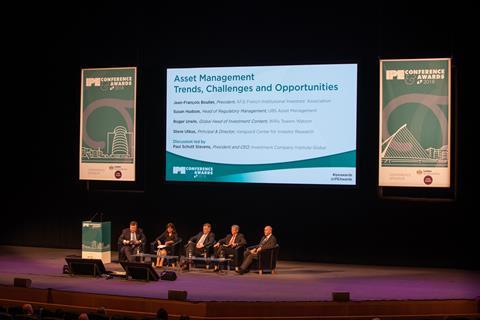 According to Utkus, the focus on accountability and transparency, the rise of member-centric thinking, and investor interest in ESG were other examples of “this incredible integration of the future of the asset management industry and the future of retirement systems”.

ESG and sustainability have to be seen as “a very slow moving but unstoppable train”, Urwin stated.

“It has to be seen as something where different individuals, different leaders, different funds are making leadership statements afresh all the time and that is creating the S-curve of development,” he said.

The increased focus on ESG and sustainability in institutional investment was “the equivalent of what many corporations are up to in terms of creating a ‘profits-with-purpose’ type of Zeitgeist,” added Urwin.

He advocated for sustainability as “a route to producing intergenerational equity and inclusiveness in our industry”.

Jean-François Boulier, president of Af2i, the French institutional investor association, said the integration of financial and extra-financial aspects in investment was “a new frontier” and that co-operation was key to making a success of what was “a long journey”.

It was important that “the message gets to firms”, he added, because it was ultimately corporates and governments that would change the world.

Investors were hopefully putting constant pressure on them but “in reality we are not the ones who will make the necessary change”, said Boulier.

Susan Hudson, head of regulatory management at UBS Asset Management, spoke about regulatory fragmentation in the context of the UK’s departure from the EU, and any transition period where the UK would still be within the EU but not be able to shape rule-making.

She said there was considerable debate about what “substance” would be required for delegation arrangements in different countries amid efforts to move away from so-called “letterbox” entities.

This had the potential to raise costs for end investors, she said, which “none of us would like to see given that we’re all trying to build up much more scaleable organisations to pass on those savings to clients”.