Asset selection
Bond sentiment has been trending upwards for a year, approaching a net value of zero everywhere, except in the EU. Analysts contend that central banks have secured a soft landing.

By contrast, net equity sentiment is receding, except in Japan, where it has surged. It looks like a correction after last month’s desperation. Yet, Japan may join the sentiment levels of EU and US if political worries recede.

The gap between equity and bond sentiment remained stable in the US and the EU. In Japan, it has spread in favour of equities and in the UK it has closed, with bonds scoring better.

US sentiments are trending upward, as if positively correlated. Possibly, analysts, especially in the US, are as politically divided as the population, with Trumpists driving equity sentiment and Democrats seeing a period of reforms and corrections ahead. The two views may be compatible, although on a different time scale, with reforms bringing better growth prospects.

UK net sentiment is still driven by political risk, with neutrality on both equities and bonds over 50%. The figures indicate diminished growth, with no resolution in sight, a view linked with a hard Brexit. This prognosis is not in line with parliament scoring one victory after another on the question of who decides the terms of Brexit and its wish for an agreement with the EU.

Japanese analysts have made an about-turn on political risk. Rather than escalating, China has chosen to bide its time until the US presidential elections. The level of unrest in Hong Kong remains high but is, for the moment, not a threat to peace. Nevertheless, net equity sentiment remains slightly positive and uncertainty is as high as in the UK. Nervousness has diminished, not gone. 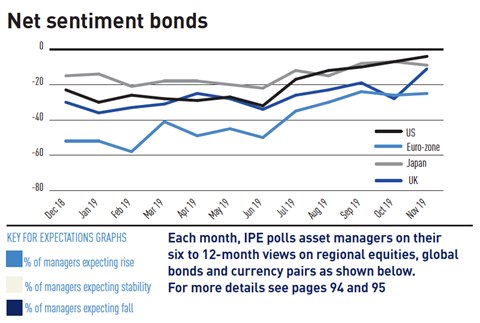