1
Ireland: Drive is on for auto-enrolment 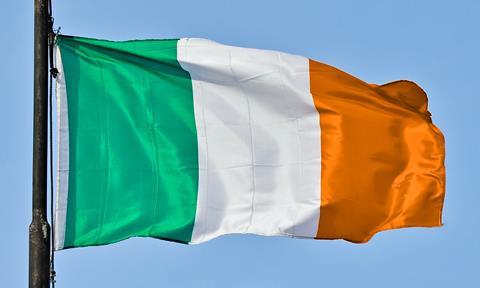 Part of the reason for delays in producing detailed recommendations over the past year has been party politics: as expected, the 2016 general election produced a hung parliament, so the current Fine Gael government needs the support of the main opposition party (Fianna Fáil) for whatever pensions measures it introduces.

But it did not help that Leo Varadkar, the former minister for social protection who was a driving force behind reform, became taoiseach (prime minister) last June. His successor, Regina Doherty, has not only had to acquaint herself with her brief but also fight off several private members’ bills presented by opposition parties and intended to tighten up sponsor companies’ obligations towards defined benefit schemes.

One of the government’s main goals is to introduce a requirement for employers to set and contribute to an employees’ pension plan – in other words, auto-enrolment.

The government had committed to launching a consultation on an implementation roadmap intended to be published by end-2017, with an expectation that contributions would commence by 2021.

However, as at mid-January 2018, the process had not got started. It is expected that the roadmap’s contents will mirror the recommendations of the OECD review on the Irish pensions system, commissioned by the European Commission and published in 2014.

The report outlined several approaches for increasing private pensions coverage, including compulsion and soft-compulsion, but the introduction of auto-enrolment has since become government policy. 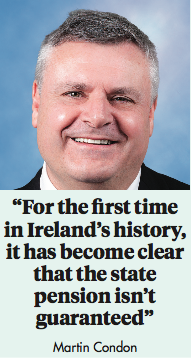 The report also considered that existing private schemes should be subject to the same rules as for any new schemes.

“We’ve got to go down the auto-enrolment route,” says Martin Condon, director at Aon Hewitt in Dublin. “Only 50% of people are in private pension schemes, but the employment rate is now increasing rapidly and for the first time in Ireland’s history, it has become clear that the state pension isn’t guaranteed.”

It is not just workers’ interests which would be served by increased private pension coverage – it is also in the interests of companies themselves, says Patrick Cosgrave, managing director, DC solutions, Ireland at Willis Towers Watson .

Cosgrave points out that the state pension age itself is rising from 66 to 68, from 2028.

“With employment laws changing and making it much more difficult to enforce retirement, many employers could in future face the challenges of dealing with a dissatisfied ageing workforce, many of whom who would like to retire, but can’t afford to do so,” he says.

Meanwhile, Ireland’s Pensions Authority has set out proposals to reform and simplify the provision of supplementary funded private pensions in Ireland, in order to improve outcomes for pension savers and increase public confidence and understanding.

These will result in significant changes to the framework for supplementary private pensions, and include:

Most of these changes will need to be in place by the January 2019 deadline for transposition of IORP II into Irish law, says Cosgrave. “The increased governance requirements will result in many plan sponsors and trustees questioning the sustainability of their current approach, and an increasing number may look to outsource trusteeship,” he says. “Multi-employer pension schemes – master trusts – would become a much more common means of pension provision.”

Condon says that another factor in the delay in introducing wider occupational pensions coverage is the stated intention of pensions regulator Brendan Kennedy of cutting the number of DC schemes from an estimated 160,000 to a target of 100-150 active schemes within the next few years, to facilitate effective oversight.

“Many of these schemes are simply one-man DC schemes under trust, where the company CEO is also a trustee, and they are very difficult to regulate,” says Condon. “The regulator should force every scheme with under, say, five or 10 members to go into either a contract-based arrangement (PRSA) or a master trust. Certainly, PRSAs have found some market traction in recent years.”

Paul Duignan, pension service manager at the Electricity Supply Board (ESB), agrees that the real number of DC schemes has been overstated because of one-man plans, and is concerned that there may therefore be undue pressure to force even medium-sized schemes into a master trust arrangement. 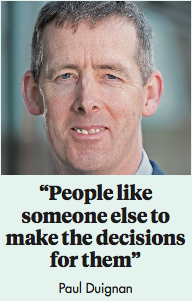 Retiresmart, the ESB defined contribution pension scheme, has 2,000 members, with the potential to rise to 5,000.

“We don’t want to be forced into a master trust, because it could lead to higher costs for either employers or members,” says Duignan. “Fewer schemes, managed by a very small number of master trusts, could also damage competition.”

Duignan is a big fan of auto-enrolment. Retiresmart has included mandatory auto-enrolment since 2001, with no opt-out. There is automatic escalation every five years which operates on a soft mandatory basis – the increase will happen unless the member refuses it.

“People like someone else to make the decisions for them, and in terms of contributions coming out of their salary, they don’t miss what they’ve never had,” he says.

This is true in spite of the fact that currently over one-third of Retiresmart members are blue-collar workers on fairly modest salaries.

But Duignan warns: “It’s important that any comprehensive auto-enrolment scheme doesn’t add layers of administrative costs to the existing PRSA model. It’s also important not to add a lot of extra regulations, which again will increase costs for schemes.”

Jerry Moriarty, CEO of the Irish Association of Pension Funds (IAPF), says: “We think auto-enrolment is a good idea because it increases pension provision. The UK gives a good example of what can be done.”

But there are some things that might be done differently, he argues.“In the UK, the whole payroll issue was not addressed early enough,” Moriarty says. “Employees may be eligible one month but not the next. We think eligibility should be checked just once a year, once employees are in the scheme.”

Another “must”, he says, is to keep things as simple as possible.

The IAPF considers that any auto-enrolment scheme should be mandatory, with an opt-out option.

And Moriarty echoes concerns from others about the lack of detail on how the auto-enrolment system will work and the greater reliance on master trusts. “The issues will include who’s going to run the master trusts – will there be a NEST equivalent or commercial providers? And there’s been no detail on what contribution levels would be – is the objective to provide most people with a decent pension, or just something?” He adds: “The main aim for us is that it doesn’t undo the existing provision in any way.”

Condon says: “Firstly, we need clarity and certainty urgently from the government, and a road map for auto-enrolment. We also need rules from the regulator, not only on auto-enrolment, but especially on master trusts. A number are already being established, but at the moment there is a lack of basic regulation.”

Cosgrave agrees: “A robust master trust or alternative framework will be needed to support the government’s auto-enrolment implementation road map. The government road map should also provide clarity on the expected levels of auto-enrolment contributions and how they might evolve over time. It should also clarify the contribution collection mechanism – centralised or employer-centric? – how the monies may be invested, and the governance framework.”

And he says the payout phase must not be neglected. “In our view, it would also be beneficial if there could be some form of post-retirement master trust-type structure allowing retirees who wish to access their benefits in the form of an approved retirement fund (ARF) to continue to benefit from economies of scale and good governance,” he says.

“Even with mandatory membership, most DC schemes won’t deliver anything close to what people need on retirement, so members need to be educated”

According to Cosgrave, the Pensions Authority is developing a framework for master trusts that may be published this year.

“It is likely to propose that master trusts be governed by a single-purpose trustee company and hold capital which, as a minimum, would be sufficient to fund an orderly run-off or wind-up,” he says. “It may also set out requirements to provide an effective channel for members to interact with the master trust trustee.”

Duignan warns that education and communications are critical for successful auto-enrolment.

“Even with mandatory membership, most DC schemes won’t deliver anything close to what people need on retirement, so members need to be educated,” he says. “We have found the best way is through one-to-one meetings, or small groups.”

Condon agrees: “The unending challenge of getting DC members to understand and take ownership of their position in DC land is an equally compelling challenge that we face.”