Since 2010, successive governments have proposed, or at least hinted at, sweeping pension reform. But this could finally become a reality in 2017, as the regulator publishes a report on the market, finds Jonathan Williams

• Echoing its predecessors, Ireland’s current minority government wishes to improve the level of pension saving. This is likely to be achieved through auto-enrolment.
• Reforms are expected to build on recommendations from the Pensions Authority to simplify and consolidate the market, boosted by the introduction of master trusts.
• The regulator wishes to reduce the number of lay trustees.

Pensions reform can be contentious, especially when it compels people to sacrifice current income. The risk of auto-enrolment being seen as taxation is one reason successive Irish governments have shied away from introducing reforms since the financial crisis, despite the measure enjoying support from all political parties.

The need to agree – at the least – the broad strokes of any future reform was recognised by Joan Burton, who until 2016 was Irish minister for social protection. Her launch of the Universal Retirement Savings Group – and request for it to draft a “road map” for pension reform – was well-intentioned, if so far fruitless.

Since succeeding Burton, the in-coming minister Leo Varadkar has spoken of the need for change, and his department has signalled it will outline proposals in 2017, coinciding with advice from Ireland’s pensions regulator, the Pensions Authority, on market consolidation. “Universal pension provision will have to begin with major reforms in the pension landscape as it is,” Varadkar said. “We need much more coherence and consistency, in order to increase confidence and understanding on the part of contributors.” These reforms would be part of a multi-year programme to design and legislate for the system’s introduction, however it may look, he added.

The Pensions Authority continues to emphasise its view that the number of schemes should be cut – down to the hundreds, according to its head, Brendan Kennedy – a move best achieved by the launch of master trusts. The final report, expected early in 2017, is likely to be brimming with recommendations on how to streamline tax laws, but also simplify oversight and consolidate savings into fewer, and larger, master trusts.

Such an approach would allow master trusts to “hoover up” smaller schemes, says Jerry Moriarty, chief executive of the Irish Association of Pension Funds (IAPF), ideally improving governance and lowering costs. “So, for that, I think master trusts would be very good,” he says. But master trusts would bring the end of the current occupational system, whereby the employer is directly involved in the provision of benefits, and would also necessitate a reduction in the role of lay trustees.

A shift away from lay trustees is a move Moriarty would be loath to see, partly because the IAPF fears the professionalisation of trusteeship will lead to conformism among funds. “You’d have to be careful that you make sure you don’t lose the good elements that well-run occupational schemes can bring,” he argues. The IAPF’s view is shared by the Pensions Council, established to offer the government advice on pensions matters with a focus on consumer interests. Towards the end of 2016, the council told the regulator that lay trustees should continue to be encouraged, while urging stricter requirements for anyone responsible for a master trust.

And while a reduction in the number of lay trustees is certainly the desired outcome, so far the IAPF has only proposed a system of trustee qualifications to improve the level of talent. Such an approach might not necessarily be the best solution, argues Philip Shier, speaking on behalf of the Society of Actuaries in Ireland, which views trustee education courses every two years as repetitive and lacking value. He says that while the current trustee system works for larger-scale pension funds, the “onerous” nature of trusteeship may be unnecessary for smaller schemes, suggesting instead contract-based solutions, or the regulator’s master trust approach. However, even where contract-based and for-profit ventures are permitted there should be safeguards, according to the IAPF. Moriarty points towards the Independent Governance Committees imposed on UK contract-based schemes as a way of ensuring member interests are represented, even in a for-profit system. 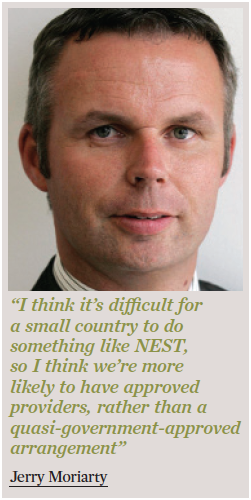 Perhaps hoping to avoid some of the problems that have befallen the UK, the regulator is proposing that master trusts be authorised prior to entering the market. “This would enable the Authority to perform a gatekeeper role and ensure that schemes and trustees seeking entry to the pension system are properly structured, have robust governance processes and procedures in place and are therefore capable of providing good member outcomes,” the regulator’s own consultation notes. Further, and in contrast to the UK, master trusts would be expected to submit business plans. The stricter rules should also be applied to existing pension funds, the Pensions Council has suggested, a step likely to lead to further consolidation which, it said, was “desirable”.

As far as other structures ensure auto-enrolment is a success, Moriarty says Ireland could cherry-pick elements from the UK and New Zealand. In New Zealand, the local tax office processes payments and diverts them to the superannuation provider, and also appoints a number of default providers into which less-engaged workers are placed. However, Moriarty is not expecting the Irish government to launch its own provider of last resort, the approach pursued in the UK with the National Employment Savings Trust (NEST). Many in the industry believe the cost would be prohibitive. “I think it’s difficult for a small country to do something like NEST,” says Moriarty, “so I think we’re more likely to have approved providers rather than a quasi-government-approved arrangement.”

Even with stakeholder consensus emerging on how the pension system should look, politicians need to agree how contributions will be phased in. Could a slow introduction see pay raises deferred, as in Australia, or would workers be required to take money from their existing pay packet on the understanding that employers match contributions, as the case in the UK?

Employer and union organisations have suggested for some time that the Universal Social Charge (USC), a progressive tax introduced in the wake of the 2010 bailout, should be diverted to pensions as it is phased out. Consensus on such a key point would give the government cover to push ahead, yet the first of the reductions in the USC went ahead in last year’s budget without the pension reform in place.

Retaining support from key stakeholder groups such as employers and unions will be crucial, and Varadkar has suggested he would only proceed if there were broad political, but also societal, consensus. “I think the minister is sounding genuinely very keen about it; he sees the long return picture,” Moriarty says. “But, it is so hard for anything to get through the government at the moment.” The problems arise from Fine Gael leading a minority government of which only one-third of parliament is a member, leaving ample room for opposition groups to disrupt proceedings.

Moriarty predicts that if action is not taken in 2017, pension reform will stall for several years, probably until the second year of the next government. Any proposals arising at that point will be published close to the 10th anniversary of the National Pensions Framework, the landmark report that first urged the drafting of a long-term plan for the introduction of auto-enrolment on the eve of Ireland’s bailout by the troika.