The Irish Association of Pension Funds (IAPF) has called on the government to create the role of pensions minister, fearing that reform of the sector has fallen off the government’s agenda.

The plea was made by the association’s chief executive Jerry Moriarty at its annual benefits conference in Dublin.

Moriarty said: “Pension provision is a long-term challenge for our society, but the demographics are only pointing in one direction and we need action now. Continued inaction will result in a very difficult retirement for a huge cohort of Irish people for many years to come.”

He continued: “The sheer scale and urgency of this issue is such that it needs a dedicated focus and we therefore believe that a minister for pensions should be appointed, as has been done in a number of other European countries.”

Moriarty argued that having a dedicated pensions minister would “strengthen the focus on retirement planning and give it the importance we believe it deserves, rather than just being a small part of a very big department”.

In Ireland pension matters are handled by the department for employment and social affairs; Regina Doherty is the minister.

In February 2018, the Irish government launched its roadmap for pensions reform, a detailed plan which included proposals to strengthen the sustainability of the state pension and improve coverage of workplace pensions through auto-enrolment. 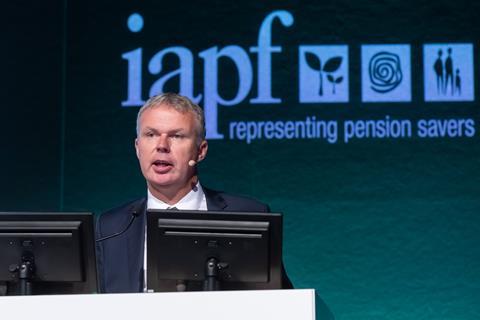 However, while work on the roadmap has been undertaken by government departments and working groups since its publication, according to the IAPF only eight of the 36 actions which were due to be performed since then have been carried out.

Moriarty told the conference: “We are increasingly concerned that much of this work may have slowed in recent months and could ultimately be derailed until after the next election. It is disappointing that most of this work remains unseen and appears to have lost its political direction.”

He said the lack of progress on the roadmap, together with the failure to transpose the revised European pension fund directive (IORP II) into Irish law nine months after it was due, did not give any confidence that pensions were seen as a high priority.

There had not even been a consultation on draft IORP II-linked rules, Moriarty bemoaned.

Should a pensions minister be appointed, Moriarty said the individual’s initial focus should be on implementing the pensions roadmap, specifically on completing the following:

* Publication of the final design for the auto enrolment system;

* Simplification of the pension system, including the reform of approved retirement funds, pension tax harmonisation, and the elimination of anomalies in the treatment of different retirement arrangements;

* Delivery of the additional protections promised for members of defined benefit schemes.