Ireland’s accrued pension liabilities for occupational schemes reached €436.3bn at the end of 2015, according to the latest data from Ireland’s Central Statistics Office (CSO).

The numbers compared favourably with similar figures from the UK on a percentage of GDP basis.

The CSO said the total liability represented 167% of GDP. By comparison, figures published in March this year for the UK to the end of 2015 revealed that UK pension providers had total accrued-to-date liabilities of £7.6trn (€8.7trn) – or 400% of GDP.

The figures were published in compliance with recently introduced EU rules.

Claire Hanley, statistician at the CSO, said: “Ireland’s liability as a percentage of GDP is low relative to other countries, reflecting Ireland’s comparatively young population.”

Hanley said it was important to note that government liabilities should not be considered to be similar to a debt that has been borrowed and has to be repaid.

“They are deemed to represent the pension commitments of government as outlined by current pension rules and regulations,” she added.

According to figures published in February by LCP Ireland, an actuarial consultancy, the overall deficit for Irish defined benefit schemes fell by €300m from the end of 2016 to October 2017.

However, the report revealed that the deficit had grown by almost 40% over 12 months since 31 December 2015.

The liabilities of UK government-run pension schemes totalled £5.3trn or 279% of UK GDP at the end of 2015, Hanley noted. Over five years, the UK’s overall pension liabilities have grown by £1trn. 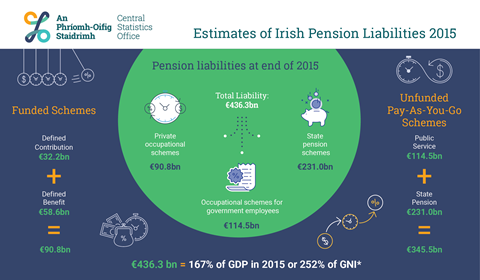