In February this year the Denmark Tavern – which dates back to 1786 – was reopened in Serampore in the Indian state of West Bengal. The restoration was led by the National Museum of Denmark along with the state heritage commission.

As Commonwealth heads of government gather in London this week, the Denmark Tavern can be seen as an illustration that, as the UK tries to improve its trading links with its old colonies for a post-Brexit world, it faces tough competition even with its sentimental links.

When it comes to trade, the position for the UK does not look as great as pro-Brexit politicians may proclaim.

In fact, not only do Germany and France export much more to India than the UK, but so does Belgium, as data from Eurostat illustrate.

What the UK does have with India is the largest trade deficit of any EU country. 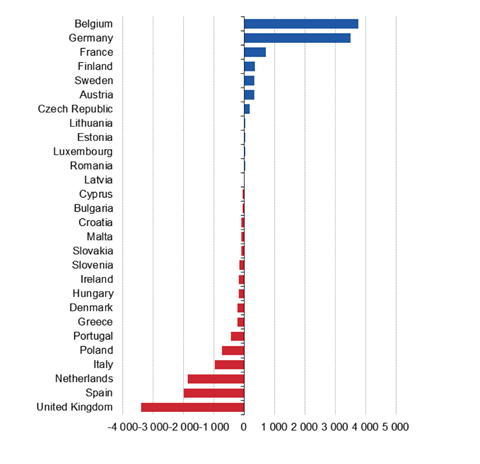 India was of course, the crown jewel of Britain’s colonial empire. Queen Victoria was proclaimed Empress of India in 1877 at the request of prime minister Benjamin Disraeli in a bid to bind India more closely to Britain.

But the British never had India completely to themselves. The Portuguese only left their colonies in India (Goa, Daman and Diu) in 1961, and that was not by choice. Many Goans have since emigrated to the UK and elsewhere within the EU as Portuguese citizens.

The French also owned various territories, most significantly Pondicherry in Tamil Nadu, which were fully transferred to India in 1962. French remains an official language and there is still a French community in Pondicherry. 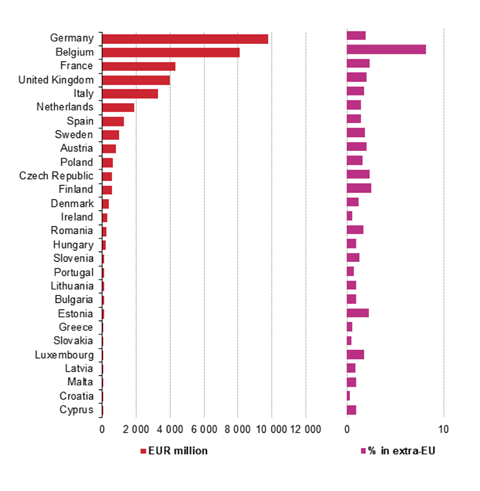 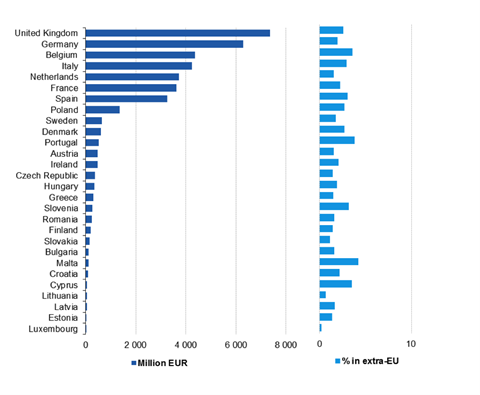 While the UK, Portugal and France have well established and long-standing relationships with India, they are not the only European nations with historical links from colonial times.

Denmark may not be an obvious ex-colonial power, but Serampore in West Bengal’s Hooghly district was under the Danish rule from 1755 to 1845, when it was known as Fredriksnagore in honour of the Danish King Frederik V, who ruled from 1746 to 1766.

The trading post was ceded to Britain in 1845 together with another Danish settlement in India, Tranquebar (Tharangambadi) in Tamil Nadu.

For a more in-depth look at India’s Danish links, Soumitra Das writes for The Wire about the history of the Danes in Serampore here. There is also a fascinating 2010 report, Indo-Danish Heritage Buildings of Serampore, by Flemming Aalund and Simon Rastén, detailing several buildings originating from the Danish period that are still significant landmarks.

The authors of the latter state that, during the heyday of Danish overseas trade, Serampore thrived and developed through considerable public and private investments.

Moreover, while the salary offered to Danish government officers was notoriously low, “the officers conducted private business along with their official duties, and it seems that the condition in Serampore was especially liberal, providing attractive private business opportunities”.

The newly renovated Denmark Tavern, says Das, is a handsome yellow and white double-storeyed building with well-furnished rooms for accommodation with a comfortable cafe where people can enjoy a cup of coffee.

It may not represent five-star luxury, but I suspect it will attract many tourists in the future, as word gets out of its historic origins. For the Danes at least, Serampore may still have the ability to provide “attractive private business opportunities”.

Whatever one’s views on Brexit, the resurrection of the Denmark Tavern in Serampore suggests that the UK does not have a monopoly on sentimental relationships with India. It will take more than sentimentality to reverse the UK’s trade deficit with India.