The race is on to complete the EU’s flagship Capital Markets Union (CMU) project before the mandates of the Commission and Parliament elapse next year.

As of early August, of the 33 original elements of the CMU originally planned, all had been deemed  ‘delivered’ – in other words, that they had been subject to European Commission (EC) proposals, according to the EC’s Deepening Europe’s Economics & Monetary Union progress paper.

But at the same time, only three had already been finally cleared through all the EU institutions, and three-quarters remain incomplete. Completed projects include venture capital, on prospectuses, and on securitisation.

Two outstanding priority elements comprise harmonised rules for business insolvency, and the proposal for a Pan European Personal Pension Product (PEPP), which could boost investment in energy infrastructure and smaller companies. EU companies are more reliant on bank lending than their counterparts in the US or Japan (see figure 2).

A stark warning that the CMU might not clear at all as planned came recently from Valdis Dombrovskis, the commissioner responsible for the project. He said the CMU “will only happen if all other EU actors follow up declarations with action”. He hoped that this autumn will yield “a fruitful harvest for getting this legislation adopted”.

Both insolvency rules and the PEPP received a high-level political boost at the Merkel-Macron summit meeting in Germany in June.

As a German summit communiqué stated: “We support the introduction of a Pan-European Personal Pension Product, as well as the ‘Insolvency’ legislative package, on which we aim to adopt a general approach… As a first step Germany and France should endeavour to enhance the convergence of their insolvency frameworks”. Curiously, this statement followed an earlier version in which neither insolvency nor PEPP was mentioned. 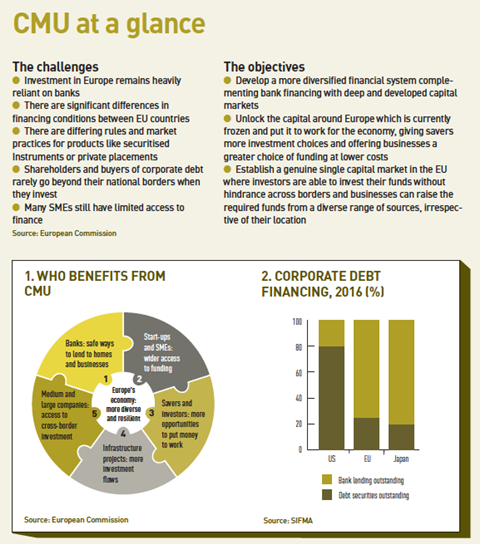 Also in June, PEPP moved a step closer to fruition when it was approved by member states at the Justice and Home Affairs Council. The legislation is with the Parliament’s Economic and Monetary Affairs Committee (ECON), and was expected to pass into the trilogue negotiation process between Parliament, Commission and Council by early this month.

Completion of the legislative process is hoped for by year-end.

As if more evidence were necessary, a recent joint survey from the International Federation of Accountants (IFAC) and Business at OECD, the business and industry advisory committee to the OECD, condemns what it describes as the “global fragmentation” of financial legislation. This fragmentation is said to be costing institutions in the EU fund management sector around 5-10% of global annual turnover – with a global cost of $750bn (€657bn).

According to the survey: “Expectations of EU respondents are particularly stark, with 75% expecting further increases over the coming five years, and many respondents citing Brexit as a driver of this expectation and general uncertainty.”

However, Rodhri Peece, head of industry research at CFA Institute in London, says problems of the fragmentation in the EU may be lessening by increasing use of regulations rather than directives, as regulations ensure uniform harmonisation in EU member states.

The final deadline for Brussels clearance of CMU legislation is Parliament’s final plenary session in March 2019, ahead of new elections in May. The current Commission will continue in office for a further six months before the appointment of the new Commission.